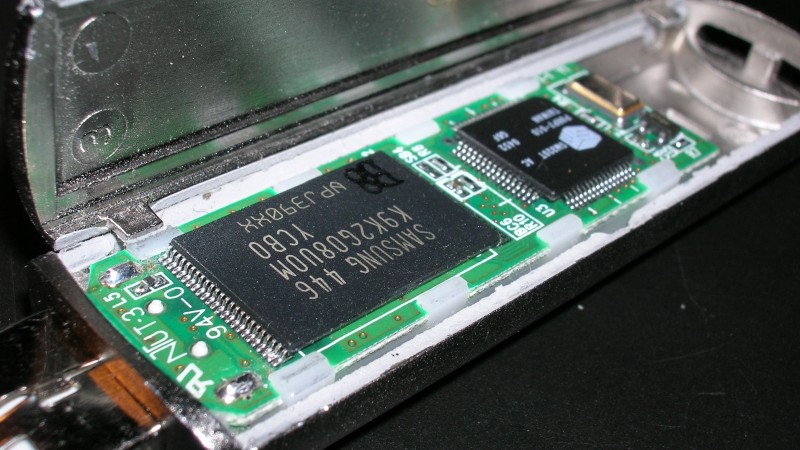 Chip makers usually try to add extra storage capacity by packing greater numbers of transistors onto their flat checkerboard-style circuitry grids. But now they’re getting smarter – they’re stacking transistors in three dimensions, and that should lead to an exponential growth in flash storage capacity.

Yesterday, Intel Corp. and Micron Technology Corp. announced they’re the latest chip makers to build upwards, shipping samples of chips with circuitry stacked in layers, much like floors on a skyscraper, that offer triple the capacity of the top alternative from Samsung. Meanwhile Japan’s Toshiba Corp. has seperately released a competing chip that should help to maintain price competitiveness.

Both new chip designs, as well as the chips Samsung released last year, follow the same 3D stacking approach. It’s a big shift from the traditional method of spreading greater numbers of memory cells onto a flat chip surface. Intel and Micron’s latest effort stacks 32 layers of flash memory, while Toshiba’s goes even further with 48 layers. Both companies are shipping samples today, and Intel and Micron said they expect to ship a final product by the year end.

The new design could eventually lead to a 3.5 TB flash drive for PCs that’s about the same size as a stick of gum, Intel told The Wall Street Journal. Today’s highest-end laptops max out with 1TB SSD storage at very high cost, and the promise of more affordable flash memory could soon displace hard drives in lower-end PCs too.

“This 3D NAND technology has the potential to create fundamental market shifts,” said Brian Shirley, Vice President of Memory Technology and Solutions at Micron Technology, in a statement. “The depth of the impact that flash has had to date—from smartphones to flash-optimized supercomputing—is really just scratching the surface of what’s possible.”

Intel and Micron’s collaboration came about in an effort to take on Samsung, which led the flash-memory market with 28 percent in Q4, according to Statista. Toshiba lies in second with 22 percent of the market, while Micron (14 percent) and Intel (8 percent) trail behind them.

The prospect of exponentially larger flash memory is enticing, but that doesn’t mean the technology won’t one day be surpassed. A number of companies are looking to build alternatives to flash, including IBM with its phase change memory (PCM) and a startup called Crossbar that’s hoping to use Resistive RAM (RRAM) to build chips with up to 1TB of storage.