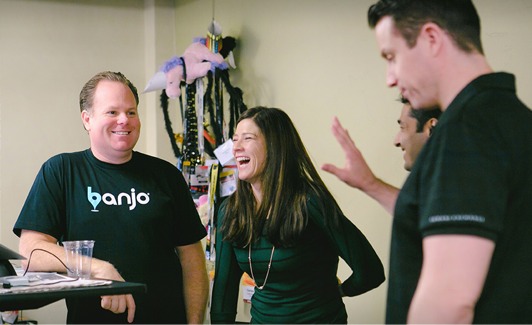 Social data company Banjo has raised $100 million Series C in a round led by SoftBank Corp. that included BlueRun Ventures.

Founded in 2011 originally as an app that allowed users to view social media posts tagged to a location or a popular event, Banjo has evolved into something far, far more interesting: It now describes itself as building a crystal ball — a way to see and know virtually everything happening across the globe the moment it happens.

The short version is that it monitors multiple social media networks in real-time and using that data is able to see what is happening anywhere in the world, with context, along with all the possibilities that data offers.

By organizing the planet’s social signals by location, we’ve changed the game for our customers, and we are just getting started. Now Banjo is moving far beyond social signals. Our technology will know and understand everything, about any location, at any time, creating value for everyone, from individuals to corporations to continents.

Damien Patton, Banjo’s founder and chief executive, likes to call the program a “crystal ball,” because it gives users a view of the entire globe. His team has overlaid a map of the globe with a grid of 35 billion squares, each one about the size of a football field. Any time an image is publicly shared to the Web and tagged with a specific location, Banjo’s system automatically places it within the grid and keeps track of what time it happened and classifies objects within the image. Patton said his computers currently process about 1 quadrillion computations every 10 seconds, and by the end of the year that will be up to 1 quadrillion per second.

In April, Banjo was named as the most important social media company you’ve never heard of.

Banjo contends that it is working on the most complex data science challenge in the world and that it is building something that’s never existed to accomplish its vision, and it’s probably not wrong; the incredible numbers involved in not only the real-time monitoring of everything on social media, but then actually analyzing, also in real-time, what’s in every image, is staggering.

The imagination can run wild on the potential users for the data Banjo is gathering; the company says that its insights have the ability to deliver faster emergency responses, safer driving conditions, smarter marketing decisions, more efficient use of energy and much more.

Despite the fact it’s hard not to be wowed by what Banjo is doing, there is one potential drawback, and that’s its possible use in government spying. At the moment Banjo isn’t building the NSA’s next spying platform, but it would be unsurprising if various government organizations haven’t noticed how it could be used for their spying activities.

Including the new round Banjo has raised $121 million to-date. Previous investors include Balderton Capital and VegasTechFund.