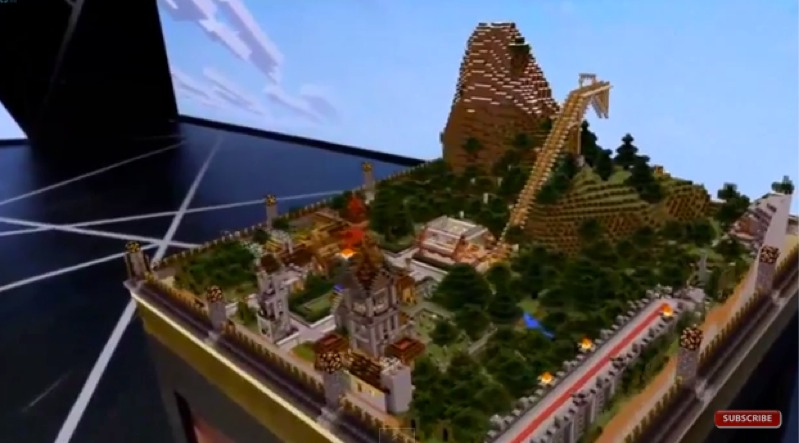 Seriously cool: Microsoft reveals it has built a version of Minecraft for HoloLens

Microsoft Corp. revealed at the E3 conference Monday that it had built a version of Minecraft for its upcoming HoloLens augmented reality headset.

The HoloLens version of the wildly popular Minecraft gives players two ways to play the game: an immersive 2D experience that puts the player within the game (a first person view,) or (and perhaps the coolest feature) the ability to display a 3D version of the Minecraft world the user is in on a surface such as a table.

The HoloLens version doesn’t take away any of the features that Minecraft players are use to, hooking into existing Minecraft worlds complete with the ability to play with others who aren’t using the HoloLens…except of course that the perspective of the Hololens player is way, way cooler.

In both viewing perspectives, players can pinch and zoom using their hands to manipulate objects, and build to their pleasure. Voice commands can also be given to pull up menu items or for certain actions.

Want to see what others are doing? well the HoloLens version also allows plays to look down and view other players within a given Minecraft world.

With the flood of virtual reality and augmented reality devices due on the market in 2016, including the Facebook, Inc. owned Oculus Rift, HTC Corp.’s Vive and Sony Corp.’s Project Morpheus, what we haven’t seen yet is a killer app that will drive veritable millions to want to buy any of them.

Perhaps the demonstration (see video above) may have over exaggerated how great the experience is, but Minecraft users, which number in excess of 100 million, are going to take one look at this a say “want.”

Even if you’re not a Minecraft fan it’s difficult not to find the demonstration at least somewhat amazing, and dare we add once again an often too overused word: cool.

A release date for HoloLens hasn’t been confirmed, but possibly expect Windows 95 launch style queues when it eventually hits the market.