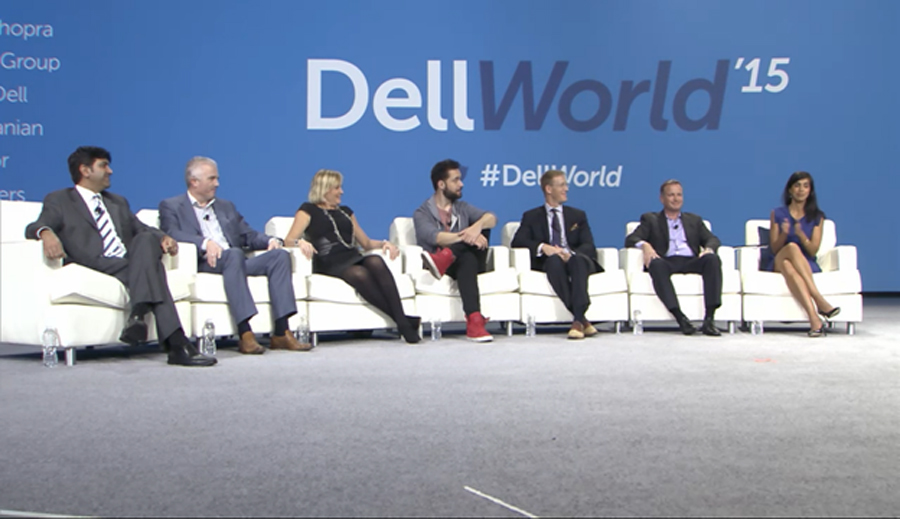 Key to IoT adoption: “Keep the human in the loop” | #DellWorld

Internet of Things (IoT) is an emerging technology that uses stored data from devices, which then enables the enterprise sectors and government agencies to analyze and predict outcomes or behavior patterns. The capabilities of IoT are relatively new, untapped and unchartered, so whole hosts of issues arise as technology progresses and adoption grows.

Shahani kicked off the discussion by asking the panel about their investments in IoT. Rogers of GE believes the company looks at it as an asset investment in the industrial Internet. He is excited about the billion-dollar investment GE is making on the West Coast to go after the market. “You have 50 billion devices connected by 2020, with $15 trillion worth of GDP value by 2030,” he said. “In the industrial world, a 1 percent increase in efficiency can range from $2 to $6 billion worth of value in the industries served by GE.”

Raynor is interested in commercialization of the technology, listing various applications of the technology and seeing it as a way to solve problems. Ohanian thinks of IoT as an early stage tech investor and is happy to see the delivery of technology promised in the movies.

The consensus of the panel was that investing in IoT could help solve problems in a completely new way or provide solutions to things you did not see as problems, the idea being to extract more value from information.

The question then became, what is the value of the information we are getting from data analytics. Chopra and Mullin see many opportunities to improve the healthcare system through the ability to track patient care and monitor the health of patients. Rogers finds value in monitoring equipment to improve production. McGrath noted that data design is the challenge. “If you are not giving meaningful insights into me, the information is useless,” he said.

According to Ohanian, there will be founders who will say, “Look what I can do” instead of solving a meaningful problem. Mullen agreed that helping people to sift through the data and find value is necessary. Raynor then shifted the conversation by saying, “There is a tendency to think data is cheap to collect and store, but it creates risk and that is a real issue.”

Shahani wondered if analytics work for or against the consumer, which opened up a whole can of privacy worms. Raynor pointed out that as far as insurance companies monitoring your driving, your chances of seeing a reduction in insurance rates are about 50:50, and he spectacled if it is worth giving the information in the first place.

Chopra believes that some form of regulation or industry oversight is necessary. The healthcare, education and financial sectors already have guidelines and laws in place. He explained that the conversation with everyone else is difficult.

“There are no universal privacy laws, he said.” He thinks there is a need for baseline protection, and he hopes the industry moves that way. He continued to explain that the industry is grappling with the capabilities of technology, and the other side is that being open and transparent can provide consumer protection and other advantages to the public.

Also part of the conversation: Is it OK to surveil your children? The consent was no. As a mother of four millennials, Mullen pointed out, “With the first one you want to know everything; by the fourth child you don’t want to know.”

Rogers felt that, ultimately, value will be the driver to adoption; however, McGrath hit home when he pointed out that people have to understand that adoption does not eliminate the need for people. For him, the IoT only has value if you keep the human in the loop.

Watch the full panel discussion below, and be sure to check out more of SiliconANGLE and theCUBE’s coverage of Dell World 2015. And join in on the conversation by CrowdChatting with theCUBE hosts during Dell World 2015.