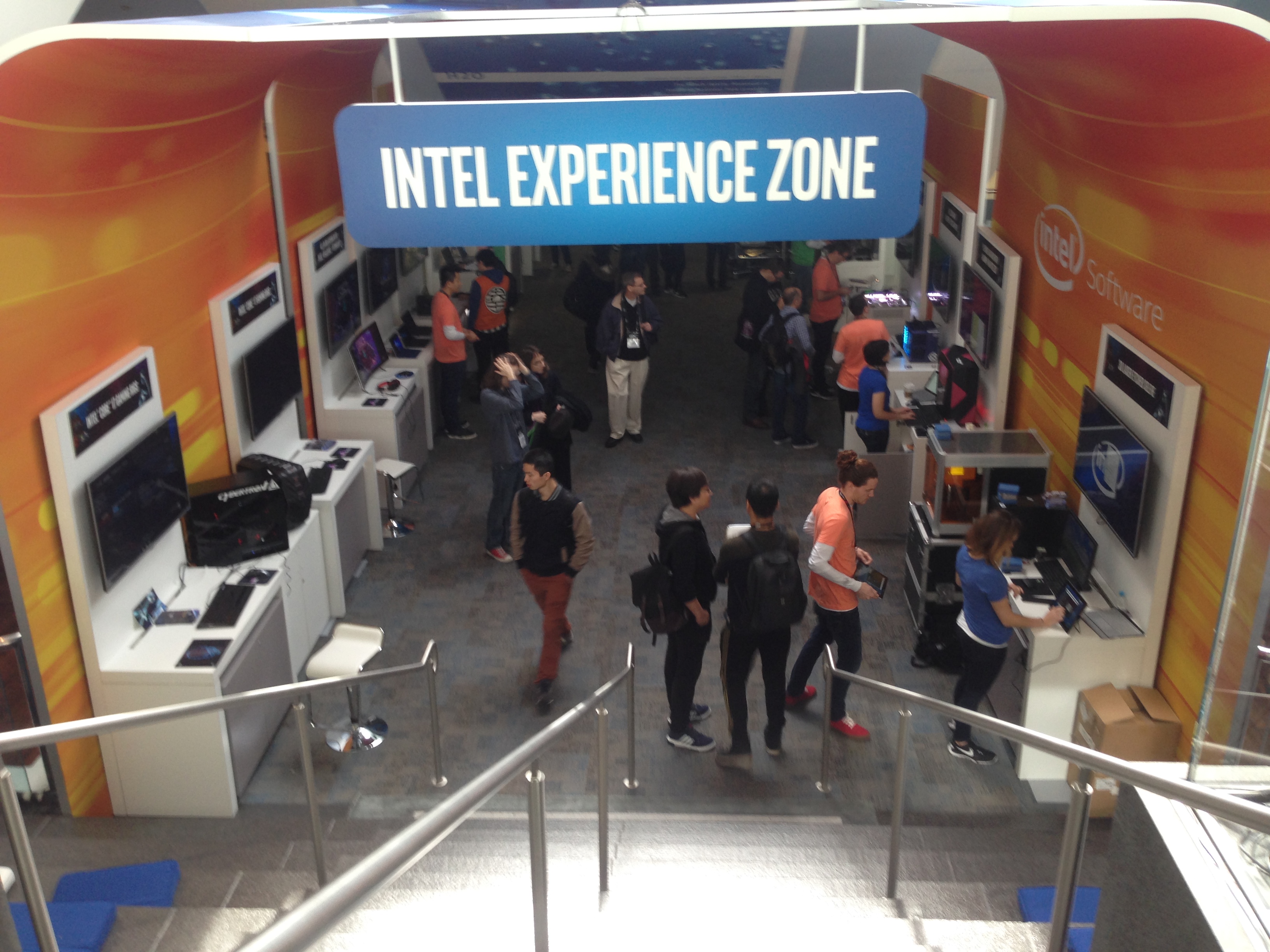 Hands on: Virtual reality with Intel RealSense at #GDC 2016

The Game Developers Conference (GDC) in San Francisco is just picking up, and already it’s clear that virtual reality (VR) and augmented reality (AR) will be big focuses of the show. So one would be remiss to visit the conference and not try out any of the demonstrations, such as the demo from the Intel RealSense SmartPhone Developer Kit.

The view from the headset, as shown on a monitor screen

When I tried on the RealSense headset, it was just a simple head-mounted display with a phone fit in to it. The employee at the booth explained that it uses multiple sensors to provide “six degrees of freedom,” which allowed me to not only look in all directions, but to move and have the view move with me.

The view on the screen was split in two, so each eye was looking at the same image separately. This provided a true 3D experience, where everything did appear to have proper depth and presence. I could turn my head and see a different view, stretching out over the virtual horizon, and when I walked forward, so did my view.

When I nearly walked into a pillar, I came to an immediate halt; my conscious mind knew that there wasn’t really a pillar there, but my eyes were telling me that I had to stop. Atop the pillar were a few small statues, and when I reached for them, an outline of my hand appeared. The statues reacted to my touch, falling down as though I had shoved them, although my attempts to “catch” one as it fell proved fruitless.

In addition to my hands appearing in front of me, the camera would identify any human faces that appeared. They were equally fuzzy and grey, lacking in color and much detail, but I could still look at people and avoid running into them as I walked around.

Other objects in the real world, however, were not made visible, so my movements were hesitant, out of concern of running into something.

While certain key elements of the environment reacted to me, I reacted to the environment in turn. I took a quick step back as a pterodactyl swooped by, our eyes meeting briefly as it moved past. Up ahead I saw a pathway of floating stones, headed off of the cliff and dropping in the air.

“If you step off the cliff, you’ll fall down and it’ll reset,” the woman providing instruction explained to me. “Most people don’t take the jump.”

As I stood on the edge of the virtual cliff, I understood why. The ground appeared to be a long way down, and looking at it through the 3D view, I began to feel a sense of acrophobia not unlike that of standing atop a real cliff. Although I knew my feet were steady on the solid ground (well, maybe not entirely steady, since the VR made me a little unbalanced), my body was ready to react to a falling sensation – fool the eyes and the body believes it.

“If you die in the game, you die in real life,” I joked, referencing a certain TV show that features a virtual reality death game. But as I was feeling unsteady at that point, I took the headset off, rather than take the plunge.

The RealSense is a nice step in virtual reality, and as my first VR experience, it was impressive. While the interactivity is limited to pushing things (or punching them, though I would not recommend trying to punch a pterodactyl) the immersion is effective, and the environment was visually appealing.

You can check out what Intel’s RealSense has to offer at www.intel.com/realsense.