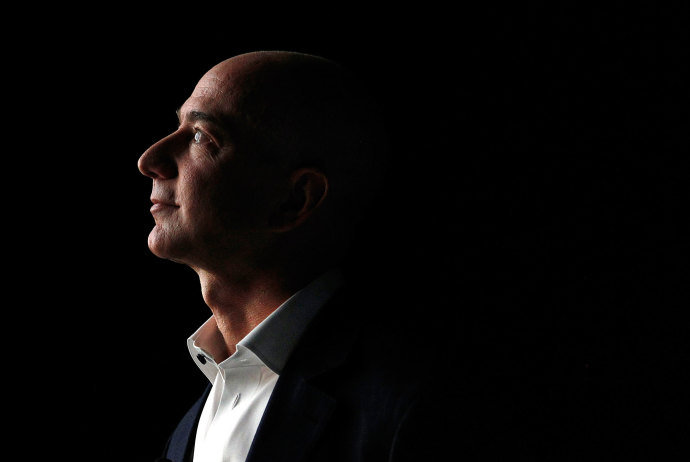 When Amazon.com launched its first Web service 10 years ago today, offering storage in the cloud, people thought it was yet another crazy, profit-nuking idea from Chief Executive Jeff Bezos.

Why on Earth, investors and analysts griped, was a company still struggling with a marginally profitable retail business embarking on what looked like an entirely unrelated business: selling the storage and computing services it used in its own operations to other companies? In “Jeff Bezos’ Risky Bet,” an October 2006 BusinessWeek cover story that was the first major media account of Bezos’ thinking behind Amazon Web Services, one Wall Street analyst groused that new investments such as AWS were “probably more of a distraction than anything else.” Even Tim O’Reilly, the CEO of tech book publisher O’Reilly Media who recognized Bezos’ strategy early on, called Amazon a “dark horse” against the likes of Microsoft and Google.

A decade later, that dark horse is nothing less than a Triple Crown winner. There’s scarcely a startup that hasn’t run on AWS, and it’s critical to the digital operations of every company from General Electric Co. to Netflix Inc., which runs all its massive streaming video on Amazon. The unlikely offspring of a retail company, AWS has managed to outmaneuver computing and Internet giants from Microsoft and Google to IBM and Oracle.

Now, the onetime distraction is Amazon’s key distinction in a consolidating group of technology giants. AWS grossed $7.9 billion in revenues last year, up 70 percent from 2014, a growth rate four times as fast as the retail operations. AWS could start to become even more of a revenue driver, too. Morgan Stanley estimates that revenues will grow to $12 billion this year and $16 billion in 2017.

What’s more, AWS has arguably become  Amazon’s new profit engine. Although the unit constitutes only 7 percent of Amazon’s overall revenues, its $1.9 billion in operating profit isn’t far off the $2.8 billion operating profit of the entire $99 billion retail business. No wonder that Ben Schachter, an analyst at Macquarie Securities, last year valued AWS at $75 billion, almost half as much as the rest of Amazon’s business.

For all that, the benefit of AWS to Amazon goes well beyond financials. The business has helped Amazon transcend its roots as a retailer to become a platform, an infrastructure that thousands of other companies help build, nurture, and profit from, that’s at least on par with Microsoft, Google, and a few other giants. In cloud computing in particular, AWS has a 27 percent share, way ahead of Microsoft’s 16 percent and IBM’s 12 percent, according to the research group Wikibon.

But Amazon Web Services’ impact is even more fundamental. In a remarkably short period of time, it has reshaped the entire technology landscape. By providing countless startups with the ability to create new businesses seemingly overnight, with far less capital spent on hardware and software, Amazon likely did more than any other company to pave the way for the huge, cloud-driven disruptions we’re seeing in nearly every industry, from retailing to entertainment to transportation. It’s hard to imagine the massive successes of Netflix, Apple’s App Store, Uber, Airbnb or dozens of other unicorns without their ability to get big very fast using cloud services AWS pioneered.

The surprise success of AWS is a vindication for Bezos, even if he would just as soon keep it quiet. “We’re very comfortable being misunderstood,” he said in the 2006 BusinessWeek story. “We’ve had lots of practice.” Although he laughed as he said it, he has long used press and investor confusion about Amazon’s plans as a way to keep rivals off-balance–and nowhere was that more apparent than in its web services business.

AWS’s dominance also reveals much about Amazon’s approach to innovation. That approach continues to vex investors, some of whom wish the company would quit spending so much on new initiatives and start reaping the profits they’ve been expecting for the better part of two decades. But if Bezos had heeded the naysayers back in 2006, Amazon would have been a very different, far less important company. As Bezos put it then, “We are willing to go down a bunch of dark passageways, and occasionally we find something that really works.”

More specifically, in a March 11 blog post, Amazon Chief Technology Officer Werner Vogels laid out 10 lessons that Amazon learned in the process of building AWS over the past 10 years. Most of all, they indicate a willingness to both move fast on developing new features and at the same time avoid cutting corners in the name of speed. As he put it in customary Amazon geek lingo, “There is no compression algorithm for experience.”

That realization gave Amazon a massive head start that still has rivals choking on its dust. Google, Microsoft, Oracle, and IBM remain behind despite heavy investment. In January, unable to keep up, Hewlett Packard Enterprise Co. dumped its public cloud. Even the judge in IBM’s lawsuit in 2013 to overturn the Central Intelligence Agency’s awarding of a $600 million cloud contract with Amazon called AWS “superior in virtually every way but price,” adding that the price was not much different either.

Still, Amazon Web Services’ position is far from guaranteed in the future, if only because most rivals can’t afford to cede such a crucial foundation of the technology industry. In November, Google signaled a renewed cloud push with the hiring of VMware founder Diane Greene to head its enterprise and cloud businesses. IBM has spent $1 billion on its Bluemix platform-as-a-service technology and is busily copying AWS features. Oracle, whose databases and other applications remain critical to many enterprises, has managed to persuade many customers to leave the applications alone or move them to its own cloud.

Some rivals are teaming up to counter the AWS juggernaut. Facebook created the Open Compute Project to open-source the building blocks of servers and data centers, attracting the support of Intel, Microsoft, and others. Wikibon analyst Stu Miniman suggested in a recent interview on theCUBE that Google’s new entry into the five-year-old initiative could be an attempt to apply open-systems pressure on AWS.

Not least, AWS customers, especially those bumping into Amazon competitively, may start liking what they see elsewhere, or at least trying to avoid getting too reliant on one company. Hewlett-Packard Enterprise and Oracle have started offering some of the benefits of AWS, such as self-service, automation, and flexible pricing, for on-premise gear.

Apple, one of AWS’s largest customers at 9 percent of AWS revenues by Morgan Stanley’s estimate, is rapidly building out its own data centers for iTunes, iCloud storage, the App Store, and other services. The firm reckons that Apple’s construction of 2.5 million square feet of data centers is almost 40 percent of AWS’s capacity. “We believe this build is a signal that Apple is increasingly likely to move away from AWS in the next 18-24 months,” Morgan Stanley analyst Brian Nowak wrote in a Feb. 1 note to clients.

Keeping the lead with database services

Yet Amazon shows no signs of slowing its AWS drive. It’s continuing to push further into cloud services, introducing hundreds of new features every year. In particular, it has started to offer applications such as database and data analytics services, which it revealed last October were at a billion-dollar-plus annual run rate.

That’s likely to be AWS’s biggest push in the next few years, judging from an analysis of 2,373 AWS jobs listings by Deutsche Bank in November. The main hiring focus is in database services, the firm said, and Amazon has the potential to benefit from enterprises storing and analyzing a large portion of their data in the public cloud. Although Deutsche Bank views a concerted AWS move up into the Software-as-a-service market unlikely anytime soon, that’s the next big opportunity further down the road.

No doubt some of Amazon’s AWS initiatives won’t succeed, but for the time being, AWS continues to set the pace for everyone else in cloud computing. In his annual letter to shareholders, released last April, Bezos was surprisingly bold about the prospects for what he conceded is a very capital-intensive business, writing: “I believe AWS is one of those dreamy business offerings that can be serving customers and earning financial returns for many years into the future.”

And so it seems that his 10-year-old “distraction” is here to stay.