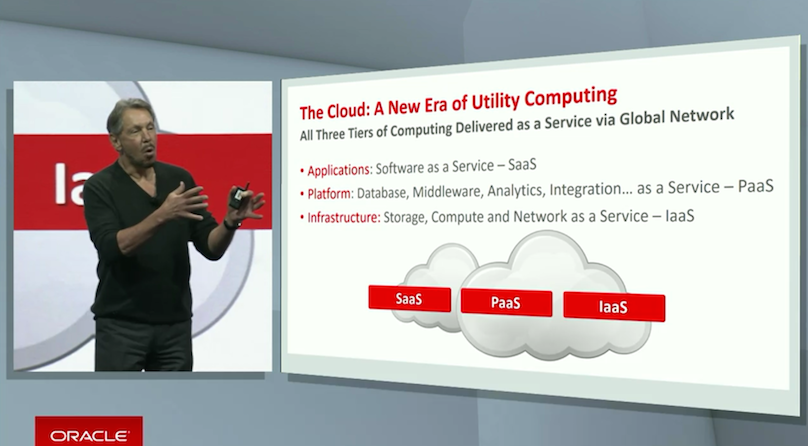 It’s no secret that Oracle Corp. was late to cloud computing, which founder and Chairman Larry Ellison in 2009 infamously called “complete gibberish.” Now, the company is looking to banish any doubts that it’s all-in on the cloud.

On Monday, the database and business software giant will introduce, among many other new services, both an updated cloud service that directly targets runaway leader Amazon Web Services and a new version of its core database software that will be released first via Oracle’s cloud. In previewing the new services Sunday at Oracle’s annual OpenWorld conference (*disclosure below) for partners and customers in San Francisco, Ellison (above) sought to position his company as a key player in thousands of companies’ quickening move from running their own data centers to tapping computing and software from the cloud.

Most of all, Ellison targeted Amazon.com Inc. as the company’s prime rival in the computing industry’s sweeping move to the cloud. And the new products and services, he argued, finally give Oracle a technological advantage over Amazon, especially in large companies’ “hybrid” computing environments in which they need their own data centers and cloud services to work together seamlessly.

“Amazon’s lead is over,” declared Ellison, who seemed overwhelmed by all the new product announcements he showed off onstage at the Moscone Center. “Amazon’s going to have serious competition going forward.”

The cloud announcements at OpenWorld signal that Oracle has no intention of letting Amazon, Microsoft Corp., Google Inc. or IBM Corp. run away with the market for good. Cloud computing, after all, is running not only all the mobile apps and Web services consumers use but also a new generation of business software. And they all require a new technology infrastructure that challenges products made by nearly every major enterprise technology company from Oracle to Dell Technologies Inc. to Hewlett-Packard Enterprise Co.

In essence, Ellison laid out Oracle’s strategy to compete against an entirely new set of companies from just five years ago. “Our major competitors today are Amazon for infrastructure and Workday for applications,” he said, replacing IBM and SAP. “This is a breathtaking change.”

The second-generation Infrastructure as a Service (IaaS), the base level of cloud computing that offers storage, computing and other resources over the Internet, will offer a “bare metal” architecture, in which a virtual machine, a piece of software that runs an operating system as if it were a physical computer, runs directly on a server with no OS in between. Despite co-Chief Executive Mark Hurd’s insistence at last year’s OpenWorld that Oracle wasn’t aiming to counter AWS, Ellison took direct aim at the public-cloud pioneer. The second-generation IaaS will offer “twice the compute, twice the memory, four times the storage and 10 times more I/O [data transfer speed] at a 20 percent lower price than Amazon Web Services,” he said.

Oracle also is announcing that technology from its acquisition last February of Ravello Systems that makes it easier to move workloads between on-premise data centers and the cloud is now available on the Oracle IaaS cloud. Steve Daheb, senior vice president for Oracle Cloud, said in an interview that this will allow Oracle customers to “lift and shift” computer workloads to the cloud without needing to rewrite applications or make changes to their networks. “We think that’s a game-changer,” he said. “We’ll be able to uniquely accelerate migration to the cloud with that technology.”

Oracle needed a more competitive IaaS offering to supplement its Software as a Service (SaaS), or its core applications offered on the cloud, and its Platform as a Service (PaaS), which includes  database, data management, application development, analytics and other software, Daheb said. “We want to make sure we have a holistic cloud offering [with] all three layers,” he said. “This needs to coexist with what customers are deploying today.”

Although Daheb didn’t say so, Oracle also needed to make sure that its customers don’t stray even more to AWS, Microsoft Azure and other IaaS services, where they increasingly can find cloud applications that replace some of Oracle’s. For instance, said George Gilbert, an analyst with Wikibon Research, owned by the same company as SiliconANGLE, Amazon’s Aurora database “clips off a big chunk of what Oracle was so good at. You don’t just announce you’re all in on the cloud. It takes years to get there and Oracle started really late.”

Oracle also is debuting a new version of its database software and services known as 12c that for the first time will be offered first as a cloud service, with a traditional software version available later. “This demonstrates our commitment to cloud by offering it cloud-first,” Daheb said.

In particular, Oracle is making its Exadata “engineered system,” a computing and storage system with Oracle database software, available as an entry-level Exadata Express cloud service for smaller businesses for $175 a month. “It allows us to extend our reach to people who wouldn’t have had access to it before,” Daheb said.

The announcements won some approval from analysts. “They are positive moves that indicate Oracle is serious about the cloud,” said Charles Eschinger, research vice president at Gartner Inc.

Oracle’s marketing aside, the company still faces big obstacles to becoming a leader in cloud computing, which is rapidly gaining at the expense of traditional hardware and software.

According to Forrester Research, 26 percent of infrastructure decision-makers at enterprises based in North America and Europe said they used public cloud services last year, up from 15 percent a year earlier. And more than half of them said they expect to increase spending on cloud services over the next year.

Forrester also expects half of all app revenues to be in the form of SaaS subscriptions by 2018. And with their earlier starts, AWS, Microsoft Azure and even distant third-place Google Cloud Platform have a sizable lead on Oracle. “Oracle has yet to demonstrate the value of its generic platform to host other services outside of Oracle’s portfolio and pull revenue away from declared competitors,” Forrester analysts Sophia I. Vargas and Richard Fichera said in a recent report.

Investors aren’t yet convinced either, knocking Oracle’s stock down 4.75 percent Friday after the company’s first-fiscal quarter earnings report. “ORCL’s tone about the database/PaaS business [on the earnings call] was more muted than on prior calls, likely a sign that Database Cloud adoption is slow,” Deutsche Bank analyst Karl Keirstead wrote in a note to clients last week. “ORCL talked up its ‘next-gen’ infrastructure as a cheaper rival to AWS, but we don’t believe it will be competitive anytime soon.”

Still, Oracle’s cloud likely will appeal to the many companies that can’t or don’t want to move their on-premise database and business software completely to the cloud. Oracle executives say they have time to make the transition, not least because only 10 percent of enterprise workloads have moved to public clouds. Indeed, Oracle’s main pitch is that it can provide the best bridge for companies that need a hybrid approach for years to come. “We think we make a lot more money by moving customers off-premise into the cloud,” Ellison said.

Oracle’s network of 19 data centers around the world pales next to Amazon’s, but Daheb claimed Oracle’s network can better handle tasks such as multi-tenancy, the ability of multiple users to use one software installation, and faster access to data through in-memory processing. “It’s not just about the most square footage of data center,” he said. “Enterprises need to be able to connect back to applications they have on-premise. Oracle can serve as an accelerator for that trend.”

Although it may not happen as quickly as Oracle implies, the company’s strategy is sound, said David Vellante, co-founder and chief analyst at Wikibon. “Oracle has monster operating profits that it can pour into R&D and continue to invest to close the gap with roll-your-own cloud options,” he said. “Customers will buy the convenience of Oracle’s integrated approach.”

(* Disclosure: Oracle and other companies sponsor some OpenWorld segments on SiliconANGLE Media’s theCUBE. Neither Oracle nor other sponsors have editorial control over content on theCUBE or SiliconANGLE.)

Amid diversity gap in the VC world, Operator Collective is born
New Informatica CEO recognizes synergy between DevOps and DataOps
Women in tech still suffer from low confidence, but this startup CEO has a solution
As digital health hits a bump in funding, startups face a raft of challenges
Kenna Security uses machine learning and collaboration to target enterprise threats