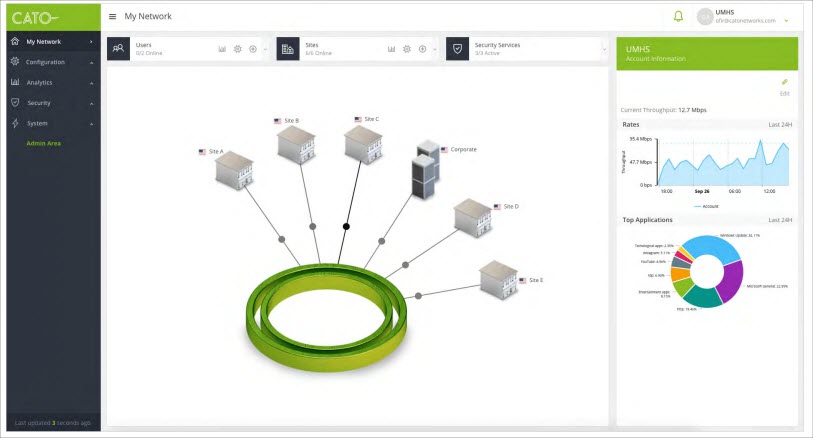 From an information technology perspective, small and midsized businesses with multiple locations get it in the neck. They often need to keep an arsenal of technology in place for protection and compliance reasons, even when the staff size in far-flung offices is tiny.

North Carolina-based Universal Mental Health Services Inc. was in just such a quandary when it constructed a virtual private network to serve more than 900 people in 13 offices across the state. Each office needed to connect to the corporate headquarter in Lenoir. To support security and performance needs, the health care provider deployed hardware firewalls from SonicWall Inc. to each location, as well as multiprotocol layer switching, a fast but expensive network switching protocol.

But maintaining such a widely distributed network became expensive and error-prone. Patches and upgrades needed to be administered individually to each office, which often meant dispatching on-site service technicians. Some remote locations were also outside of the MPLS provider’s service area. That required constructing a second site-to-site virtual private network on top of the primary one, creating additional complexity. And the organization’s dependence upon hardware firewalls limited its ability to administer group policies.

Then there was the cost of MPLS, a technology that’s typically used by large enterprises. “Deploying MPLS in a small office with four or five employees wasn’t cost effective,” said Leslie Cothren, director of IT at the company. “It was overkill.”

While attending an industry event, Cothren encountered Cato Networks Inc., developer of a cloud-based software-defined network that appeared to have all the security and management features UMHS needed. “It worked with my cost analysis,” he said. “Also, I’m very pro-cloud. Anything that can get the burden of equipment off of my back is good.”

Plugging in to Cato’s cloud meant the company could replace hardware firewalls with a single socket connection that took about five minutes to set up. The entire network is now administered centrally using group policies maintained from a central dashboard (above). IT staffers have full visibility into network activity and can manage with software some operations that used to require on-site support. For example, when a telecom vendor needed access to the phone system recently, Cothran was able simply to open a port from the administrative dashboard.

Cato’s built-in security enabled the company to scrap its firewalls and minimize time and travel to  maintain remote hardware. While the SDN solution hasn’t been cheaper, Cothren said it’s simpler, more secure and easier to administer.

And it’s about to get cheaper as well. By adopting Cato, Cothren believes he can move his entire network from MPLS to a consumer Internet service. Even after factoring in the cost of the Cato service, he estimates total savings of at least $15,000 per year. “That math even shocks me,” he said.

A 10-year journey with MySQL brings Oracle's HeatWave into the query database discussion
Legacy companies use AWS Outposts as a launchpad to the cloud
AWS technical advisor assesses EC2's evolution and the future of compute
From Regions to Outposts to Wavelength Zones, AWS brings storage and compute to where it's needed
Graviton2 performance stats indicate potential of Arm-based architecture