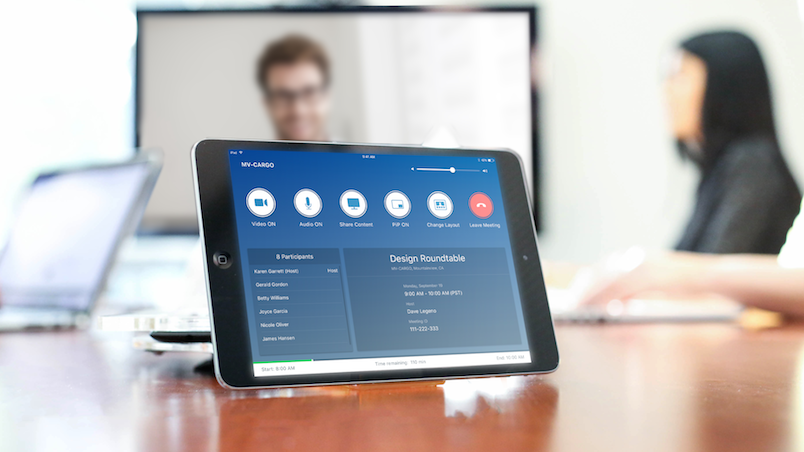 On the list of frustrating office technologies, videoconferencing surely ranks near the top. BlueJeans Network Inc. aims to change that with a new service it’s announcing today.

The Mountain View, Calif.-based company’s service, called Huddle, is a cloud video system that BlueJeans promises will add easy videoconferencing to any room at a relatively low cost. Huddle’s software can work with standard gear that customers already have on hand: Windows personal computers, iPads or NUC mini-PCs from Intel Corp., cameras such as those from Logitech International S.A., and speakerphones. Technology retailer CDW Corp. also is expected to provide a package of hardware that works with Huddle.

The Huddle service is essentially a new app that works on top of BlueJeans’ Enterprise Video Cloud, a platform for applications such as video meetings, live broadcasts, management and customer support tools and integration with other tools such as Microsoft Corp.’s Skype for Business. It’s set up to allow both scheduled and ad hoc meetings, and a central console allows the information technology department to monitor each room’s status, network conditions, scheduled meetings and other conditions.

But Huddle is intended for uses such as team meetings, particularly programmer scrum teams that involve multiple small groups that develop software quickly, as well as business meetings among people from different companies. The goal is to provide a no-hassle system that works the same no matter how it’s implemented in a particular location or which off-the-shelf components are used.

BlueJeans Chief Executive Krish Ramakrishnan said in an interview that there are 30 million to 50 million conference rooms that can use video communications but don’t have it yet. “This is a greenfield opportunity for videoconferencing,” Ramakrishnan said.

In particular, Ramakrishnan said, Huddle is aimed at solving three basic problems with videoconferencing: the “tax” it places on video meetings that can take 15 minutes or more to set up because of equipment or configuration issues, the lack of interoperability among various videoconferencing systems, and the difficulty of managing and scaling up video systems. “We have rethought the entire process,” he said. There are also some interesting features, such as the ability to recognize people from their iPhones using beacons and automatically offer to connect them to the right call when they enter a room near the meeting time.

BlueJeans will charge $599 of unlimited video per room per year, not including hardware. Ramakrishnan said that’s much cheaper than Cisco or Polycom systems with their own codecs, or data compression programs, that they say are necessary to ensure video quality. “I’m going to prove them wrong,” he said, adding that he hopes to “tank the market” for companywide videoconferencing systems costing upwards of $200,000 plus service fees.

At least one analyst briefed on Huddle said there could be a market for simpler systems. “I like BlueJeans’ approach as it conference-enables all those smaller conferencing rooms that merely support internal face-to-face meetings,” Tim Banting, principal analyst at the market research firm Current Analysis, said in emailed comments. “With the minimum of installation work, BlueJeans Huddle allows companies of all sizes to utilize these oftentimes neglected rooms for focused project work across distributed teams.”

The main challenge for BlueJeans is that it’s a relatively new name, one that doesn’t field the familiar kind of videoconferencing hardware sold by well-known leaders such as Polycom. Although BlueJeans has a direct sales force and sells the service via its website, Banting said the company will have to depend on partners such as CDW to engage a wide range of customers.

The company appears to be aiming at an initial public offering before long. It has raised $175 million, most recently a $76.5 million round in September, from Accel Partners, Battery Ventures, New Enterprise Associates, Norwest Venture Partners, Glynn Capital Management, Quadrille Capital and individual investors such as former Yankee Derek Jeter. It has also recently made a series of upper-executive hires such as a chief revenue officer and a chief product officer.