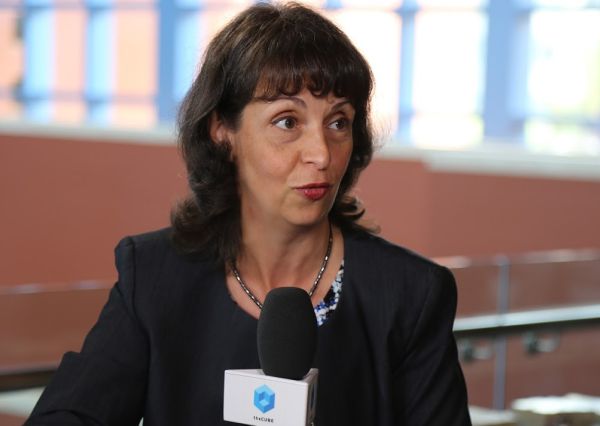 Some say the mantra of every programmer who works on networked systems is ‘the client is the enemy,’ because the user’s client program simply cannot be trusted. But, now, Node.js, a JavaScript runtime based on Chrome’s V8 engine, allows developers to run JavaScript server-side in a controlled environment.

Intel is working with the open-source community to bring out the true power of Node.js, according to Monica Ene-Pietrosanu (pictured), director of software engineering at Intel Corp. “We are driving, we are trying to be a steward for performance in Node.js. Node runs best on the newest hardware that we have,” Ene-Pietrosanu said.

She spoke with Jeff Frick (@JeffFrick), co-host of theCUBE, SiliconANGLE Media’s mobile livestreaming studio, during Node Summit in San Francisco, California. They discussed Intel’s work with Node.js, the rising popularity of the industry’s new protocol, and what Node.js brings to the table.

Intel is a long-time contributor to the open-source community. Now the company is doing the same for Node.js. Among other things, it is developing new hardware for Node.js and benchmarks that better reflect the reality of data center use cases, according to Ene-Pietrosanu. Today, there are few ways to measure that performance.

For Intel, exposing the best of its hardware to the software is very important. Node.js comes with a large central processing unit footprint, and the industry giant wants to make sure its products can handle it. With the protocol exploding in popularity, Intel wants to back a winner.

One reason for this popularity is developers can very quickly bring a product to market by using Node.js, Ene-Pietrosanu explained. This is because they need only craft a small amount of original code, building instead on the extensive existing JavaScript code libraries.

“Time to market is an unbeatable proposition, and I think that’s driving this space,” Ene-Pietrosanu said.

Node.js, however, compared with other scripting languages brings the whole platform into the mix. Beyond the CPU, it also requires networking power and a degree of storage. Intel has been investing a lot into making the whole platform shine with optimized Node.js, Ene-Pietrosanu stated. It has also made its efforts available to the open-source community.

Watch the complete video interview below, and be sure to check out more of SiliconANGLE’s and theCUBE’s coverage of Node Summit 2017.

AWS Storage Day offers fresh insight into company’s evolving hybrid strategy on Sept. 2
A 10-year journey with MySQL brings Oracle's HeatWave into the query database discussion
Legacy companies use AWS Outposts as a launchpad to the cloud
AWS technical advisor assesses EC2's evolution and the future of compute
From Regions to Outposts to Wavelength Zones, AWS brings storage and compute to where it's needed