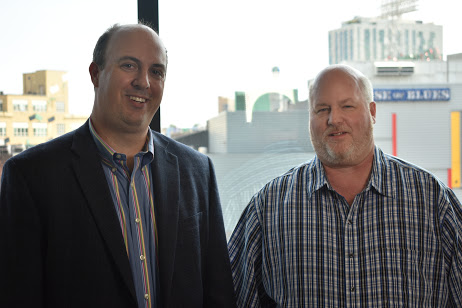 In financial services, staying on information technology’s cutting edge isn’t always practical. New technology like cloud may sound fantastic at first — until the security and compliance team weighs in.

“We’ve got very sensitive data that we’ve got to make sure doesn’t go away, doesn’t get breached and doesn’t become generally available to the world,” said Andrew Baxter (pictured, right), director of systems engineering at Commonwealth Financial Network.

Commonwealth is an independent broker/dealer serving roughly 2,000 affiliated financial advisers in the US, Baxter explained in an interview during the recent WTG Dell EMC Users’ Group event in Boston, Massachusetts. Commonwealth performs a number of functions for those advisers; for one, it acts as a clearing house for their IT infrastructure.

Baxter’s group takes charge of Commonwealth’s (and by extension, its advisers’) virtualization, server platform, storage, data protection, backup, anti-virus, etc. As one would expect, security and compliance are perennial priorities for Commonwealth.

“We have two groups —  independent of each other — that sort of check each other and then check us,” he told Stu Miniman (@stu) (pictured, left) host of theCUBE, SiliconANGLE Media’s mobile livestreaming studio. (* Disclosure below.) These special security teams continually monitor the company to ensure it maintains security patch levels and adheres to best practices.

Commonwealth’s view on security is part pessimistic, part practical. If hackers badly want in, there’s little hope of keeping them out, Baxter explained. “We’ve got to make sure that we have the tools in place to be able to react appropriately,” he said.

Commonwealth tries to stay abreast of innovation without taking unnecessary risks. Like many finance companies, it has historically been reluctant to put all of its sensitive data in the public cloud; however, it is increasingly adopting well-secured cloud technology, according to Baxter.

“We are actually a cloud for all of our advisers,” he said. The company provides advisers with exchange, active directory, anti-virus, patching and so forth. “And then we’re also looking at the [Microsoft] Azure and the AWS offerings,” he said.

Commonwealth is partnered with Winslow Technology Group LLC. Baxter is pleased that Winslow is mixing more cloud technologies into its portfolio. He believes Winslow is well-equipped to steer Commonwealth to the best cloud options in the future.

“I have worked with some vendors — they could spell the word [cloud], but that was about it,” Baxter concluded.

Watch the complete video interview below, and be sure to check out more of SiliconANGLE’s and theCUBE’s coverage of WTG Dell EMC Users’ Group. (* Disclosure: TheCUBE is a paid media partner for WTG Dell EMC Users Group. Neither Winslow Technology Group, the event sponsor, nor other sponsors have editorial influence on theCUBE or SiliconANGLE.)