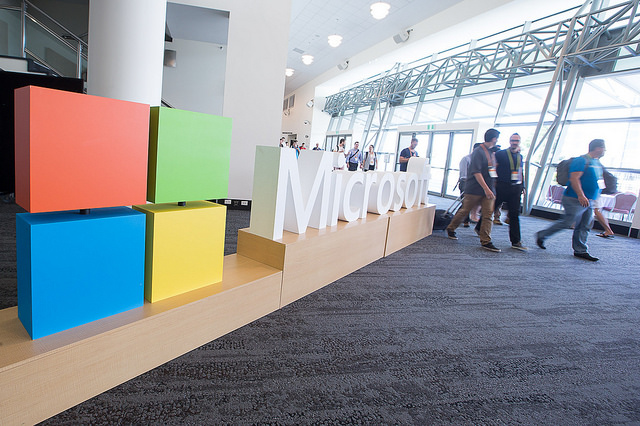 Lining up an extensive array of announcements for this year’s Ignite conference, Microsoft Corp. today kicked off the enterprise-oriented event by unveiling several dozen feature additions for key products, along with a few brand-new services that will likely go down as the main highlight.

One of the most noteworthy products that Microsoft unveiled this morning is Bing for Business. Currently in preview, it stands out from the regular version by augmenting search results with a company’s internal data. The service displays emails, documents and practically any other type of record stored in Microsoft products.

Representatives from the tech giant gave Ignite attendees a brief demonstration of what Bing for Business can do. At one point, they showed how typing “expenses” into the service yields a breakdown of a user’s approved and pending business purchases. The information was displayed in a box above the regular search results that can be best described as a more graphically rich version of Google Inc.’s featured snippets.

One of the main differences is that each box accommodates multiple tabs. During the demonstration, Microsoft representatives switched from the expense breakdown to a “Q&A” page with an overview of company spending policies.

Another high point of the day-one presentation was the introduction of three new machine learning products. Two of them take the form of managed services delivered via Microsoft’s Azure cloud platform.

Azure Machine Learning Experimentation, the first, provides a hosted environment for training AI algorithms. The other is called Azure Machine Model Management and aims to ease the task of deploying those algorithms after development is complete. To that end, code is packaged into software containers that can run just as well on a developer’s desktop as their company’s backend AI environment.

Completing the trio is the Machine Learning Workbench. It’s a desktop application in which engineers can prepare the data needed for an AI model and coordinate project activities. According to ZDNet, the software is based on an internal Microsoft project called Pendleton that was in development for over a year.

The new tools are the fruit of Microsoft’s long-running efforts to capitalize on the rising interest in AI among enterprises. As rival cloud providers likewise develop new services to address the trend, the technology giant can be expected to continue expanding its portfolio.

Topping off the announcements is a set of new tools for cloud administrators. The lineup is headlined by Azure DDoS Protection Standard, which expands upon the platform’s default protection against distributed denial of service attacks. Microsoft said that the service can analyze traffic to a company’s deployment and automatically filter malicious requests.

Azure DDoS Protection is joined by two new products for moving on-premise workloads to the cloud. The first is a web-based tool for migrating databases, while the other is a physical appliance dubbed the Azure Data Box. Organizations can have Microsoft ship Data Boxes to their facilities, load them up with information and mail them back to the company.

Last but not least, Microsoft announced a new infrastructure pricing model. Customers can now reserve virtual machines for one to three years and receive a discount as high as 72 percent in return. This new buying option is designed to even the playing field against rivals such as Amazon Web Services Inc., which has been offering reduced rates to long-term customers for quite some time.

Filling such gaps appears to be just as big a priority for Microsoft as adding new features. Just last week, the company introduced Availability Regions for Azure to match the resiliency features offered by AWS.

Most of the updates that Microsoft announced for its existing services today are fairly minor compared to the new product announcements, but one change does stand out. The company revealed that Teams, its homegrown Slack contender, will be replacing Skype for Business.

The latter offering itself took over from a service called Lync back in 2015. The move to phase it out represents a major evolution in Microsoft’s collaboration strategy, albeit not an entirely surprising one. Teams already include many of the features found in Skype for Business and has been adopted by more than 125,000 organizations less than a year since launching.