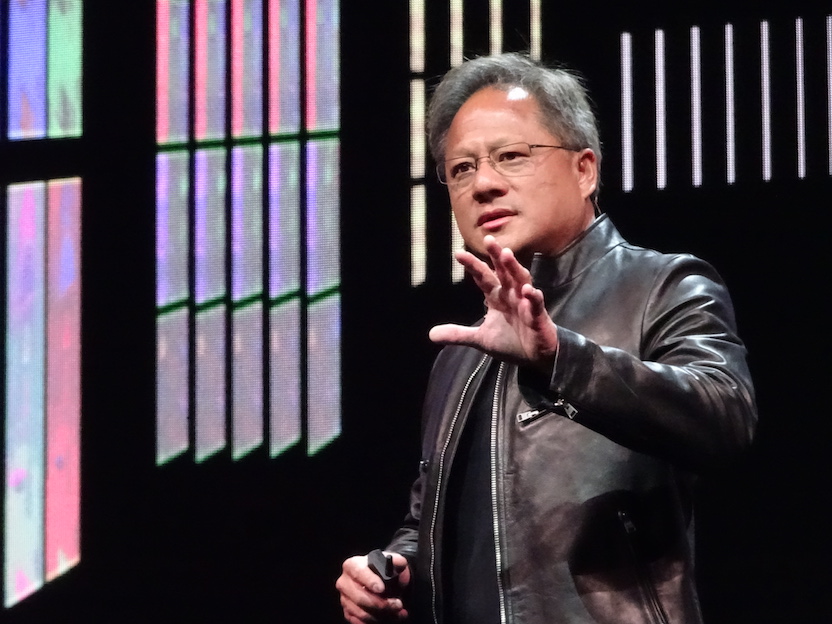 Nvidia Corp. continued to tear up the chip industry, easily beating expectations for its third fiscal quarter thanks to its booming business supplying chips for artificial intelligence applications.

The maker of graphics chips for gaming and artificial intelligence today reported a profit of $838 million, or $1.33 a share, up 55 percent from a year ago. Revenue rose 32 percent, to $2.64 billion.

“Every product line was up, but the most impressive increase was the datacenter, driven by machine learning training, and gaming, driven by market expansion in PC gaming and the strength of GeForce,” Nvidia’s flagship gaming graphics processing unit chip, said Patrick Moorhead, president and principal analyst at Moor Insights & Strategy.

Nvidia’s data center business led the way by more than doubling, to $501 million. Nvidia’s GPUs have become the go-to chips for machine learning in the huge data centers run by the likes of Google LLC, Facebook Inc. and Microsoft Corp., leading to their breakthroughs in image and speech recognition and autonomous cars.

That business had hit a pause in the second quarter after a couple of years of high double-digit gains, leading to the investor disappointment even though the company said it was a temporary blip caused by a switch to a new chip architecture. The results appear to indicate the company was right.

“We had a great quarter across all of our growth drivers,” Jensen Huang, Nvidia’s founder and chief executive officer, said in prepared remarks. “Industries across the world are accelerating their adoption of AI.”

The company also issued a new forecast for the fourth quarter. It anticipates revenue to hit $2.65 billion, give or take 2 percent. Gross margins are expected to be about 60 percent, though it didn’t offer a precise profit number. Analysts had forecast a profit of 97 cents a share, down 2 percent, on revenue of $2.43 billion, up 12 percent.

Investor reaction was muted, as shares were down in immediate after-hours trading by less than 1 percent and then up nearly 2 percent later. Nvidia’s shares fell 1.8 percent in regular trading today, to $205.32 a share, as investors braced themselves for a disappointment of the kind that hit shares after second-quarter results. Nvidia’s stock also has been priced for perfection, hitting an all-time high Tuesday, close to triple what they were a year ago. So even the mild move up can be counted as a positive.

Nvidia also has benefited from another processing-intensive activity: cryptocurrency mining, in particular for the Ethereum currency. In the second quarter, Huang said it accounted for some $150 million of the quarter’s $250 million upside over expectations and insisted that the market is “here to stay.”

But analysts have been skeptical of the staying power of that boost, and in fact, crypto-related sales fell to $70 million in the third quarter. Huang said that’s partly because miners have migrated to gaming computers for the task. “There will be new currencies emerging, existing currencies will grow in value,” Huang said. “For some time, we will see that crypto will be a small but not zero part of our business.”

The results come at a pivotal time for the chip industry, and for Nvidia. For one, Intel Corp. this week announced a surprise partnership with longtime rival Advanced Micro Devices Inc. to make chips for high-end laptop personal computers that combines Intel’s central processing unit with AMD’s GPU. “Years ago, Intel planned to have discrete graphics cards, but it didn’t work out very well even though they are very successful with integrated graphics,” said Moorhead. “It appears Intel is committed again to creating a competitive discrete graphics card for gaming and even machine learning.”

More broadly, the entire chip industry looks to be entering another period of consolidation. Broadcom Ltd. Monday offered about $105 billion to buy mobile chip giant Qualcomm Technologies Inc. in what would be the largest tech acquisition in history. The same day, the Wall Street Journal reported that Marvell Technology Group Ltd. in talks to merge with Cavium Inc. to create a new entity potentially worth $14 billion.

Gaming revenue, more than half of Nvidia’s overall revenue, rose 25 percent, to $1.56 billion, thanks at least in part to the rapid adoption of Nintendo’s Switch gaming system. Other operations saw lesser gains. Visualization revenue rose 15 percent and automotive was up 15 percent. Sales to original equipment manufacturers along with intellectual property revenue rose only 3 percent.