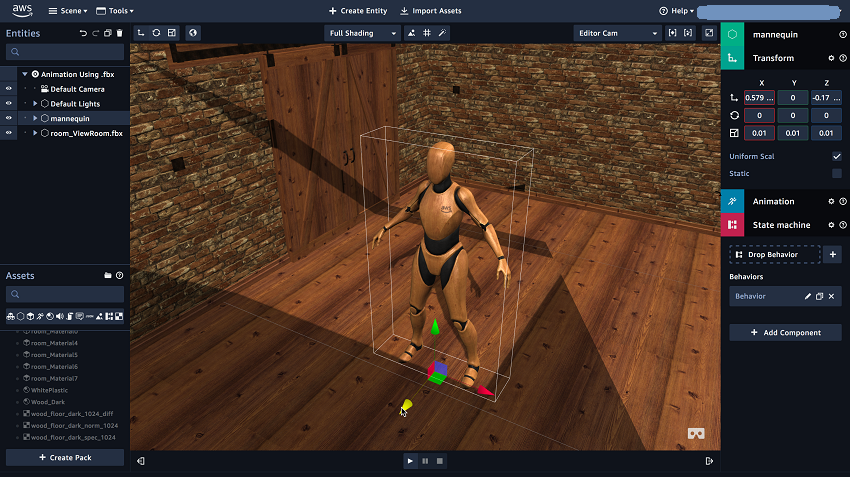 Immersive technologies such as virtual reality and augmented reality could soon become much more commonplace thanks to the launch early Monday morning of a new development platform by Amazon Web Services Inc.

The public cloud computing giant took the wraps off its new Amazon Sumerian service, which provides a platform for developers to create realistic virtual environments that can be populated with animated characters and other 3D objects. The Amazon.com Inc. unit announced Sumerian during an unusual “Midnight Madness” event Monday for select attendees on the eve of its annual weeklong re:Invent conference in Las Vegas.

The move comes at a time when companies across a range of industries are showing huge interest in AR and VR technologies. The technology, which was made famous most recently by mobile software development company Niantic Inc. with the release of its popular Pokemon Go game in June 2016, has since been applied to a range of applications besides gaming. In the last year, AR and VR has become popular for building more realistic training simulations, virtual concierge services and virtual home tours, among other uses.

But AR and VR experiences are still few and far between, not least because most developers lack the special skills needed to incorporate it into their applications. According to Amazon, the main problem with AR- and VR-powered apps is that creating them requires expertise in using a wide range of tools, including things such as 3D modeling, environmental design, animation and audio editing. Deploying those apps is also a problem, because each platform has its own unique specifications and processes that need to be tackled.

This is what AWS is trying to tackle with Sumerian. The company said the new service eliminates the need for such expertise and makes it simple for developers to create AR- and VR-based applications and run them on any platform that supports WebGL or WebVR graphics rendering. That includes mobile devices, web browsers and head-mounted displays such as Facebook Inc.’s Oculus Rift.

Sumerian combines a web-based editor with visual scripting tools, allowing developers to “drag and drop” characters and objects into “scenes” they’ve created, and also to control how they behave and respond to actions.

The service comes with a library of prebuilt objects developers can use to populate their AR and VR apps, plus a number of scene templates to get the ball rolling. Developers can also use the platform to create their own objects and scenes. The visual scripting tools draw on AWS services such as Amazon Lex and Amazon Polly, which provide automatic speech recognition, natural language understanding and text-to-speech capabilities so these virtual characters can interact with human users.

“Customers across industries see the potential of VR and AR technologies for a wide range of uses — from educating and training employees to creating new customer experiences,” said Marco Argenti, vice president of technology at AWS. “But customers are daunted and overwhelmed by the up-front investment in specialized skills and tools required to even get started building a VR or AR application. With Amazon Sumerian, it is now possible for any developer to create a realistic, interactive VR or AR application in a few hours.”

Sumerian also leverages mapping services from Mapbox Inc., so developers can integrate 3D maps and location services into their AR and VR applications and “bring location-based experiences to life,” said Alex Barth, vice president of business development at Mapbox. “For instance, we integrated Mapbox’s points of interest and global terrain maps with Amazon Sumerian so data is delivered and rendered in real-time.”

Amazon said Sumerian is available in preview starting today, accessible via its AWS Management Console. The service is priced according to the amount of storage used for 3D assets and traffic volume.