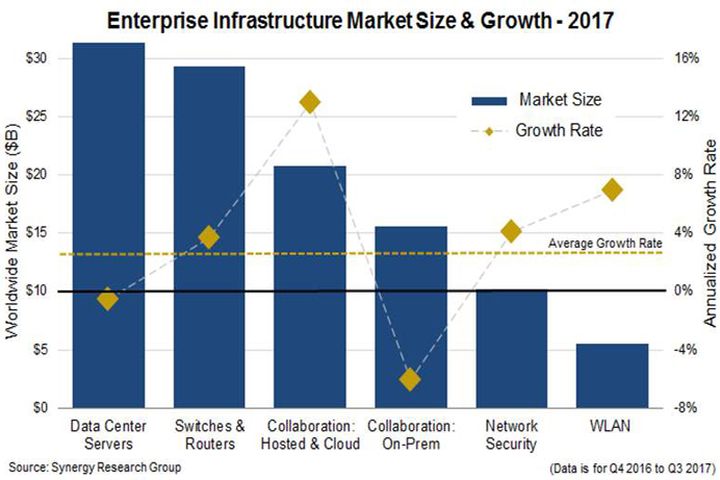 Enterprise spending on IT infrastructure hardware grows 3% in 2017

Enterprise spending on information technology hardware grew at a healthy clip in the past 12 months, with combined revenues across six major market segments rising by almost 3 percent, according to new data from Synergy Research Group.

The analyst firm said that aggregated revenue for enterprise IT infrastructure hardware topped $113 billion in 2017, with revenues for each of the last 12 quarters ranging from $26 billion to $29 billion. Data center servers were the largest segment overall, accounting for more than $30 billion in enterprise spending, though revenues actually fell by about 1 percent compared to the previous year.

The second-largest segment was switches and routers, which pulled in around $29 billion for the year, representing a 4 percent growth rate. But the hosted and cloud collaboration segment grew the most, with a 13 percent revenue increase, while the on-premises collaboration market saw significant declines.

The big winner last year was networking equipment maker Cisco Systems Inc., which remains the world’s largest enterprise IT hardware manufacturer in terms of revenue. The company came in first place in four of the six segments tracked by Synergy Group, and also ranked second in the hosted and cloud collaboration market, and fifth in the data center server industry.

That performance means Cisco raked in 26 percent of all enterprise IT infrastructure hardware revenues in 2017. Cisco’s eternal rival in the space, Hewlett-Packard Enterprise Co., came in second with an 11 percent share of the market. HPE was the leader in data center server sales, and also came second in the Wireless Local Area Network segment.

Microsoft Corp. was the only other company to lead one of the six segments, coming in at first place in the hosted and cloud collaboration hardware market.

Synergy said both IBM and Lenovo are in the top five vendors in data center servers but a long way behind HPE and Dell.

The good news for these enterprise technology sellers is that infrastructure spending is set to continue growing for the next five years at least, Synergy reckons. However, Jeremy Duke, founder and chief analyst at Synergy, warned that the focus of enterprise infrastructure hardware spending is changing, with companies placing more emphasis on hosted solutions and emerging technologies.

“Those changes will continue to present challenges for incumbent vendors and opportunities for new market entrants,” Duke said.