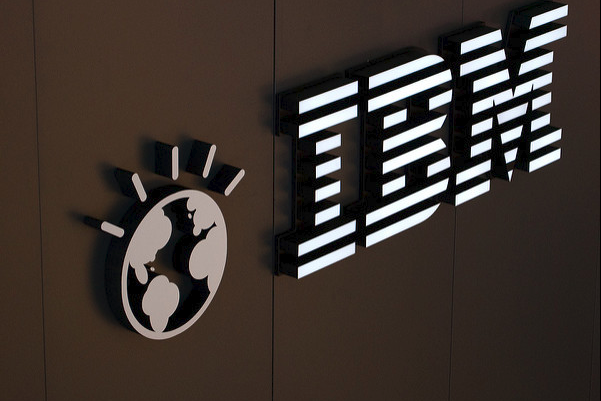 The streak is over.

Delivering on expectations it set last October, IBM Corp. reported 4 percent revenue growth in the fourth quarter of 2017, ending a five-and-a-half-year skid that had seen annual sales fall by about 15 percent over that time. The $22.5 billion in quarterly revenue was slightly ahead of Wall Street estimates of $22.05 billion. Earnings of $4.8 billion before certain costs, or $5.18 a share, also topped analyst expectations by a penny.

Despite the strong report, weaker gross margins and concerns about the impact of U.S. tax reforms worried investors, who sent shares down about 3 percent in after-hours trading. Update: On Friday, shares fell just under 4 percent. On a net basis, IBM had a loss of $1.1 billion, or $1.14 a share, because of a onetime $5.5 billion charge related to recent U.S. tax changes.

IBM continued to show progress in its “strategic imperatives” of analytics, security, cloud and the cognitive computing products and services anchored by its Watson deep-learning technology. They contributed 46 percent of total revenue, up from 45 percent in the previous quarter and 11 percent higher than a year ago.

Fourth-quarter cloud revenues of $5.5 billion were up 27 percent and IBM’s combined “as a service” offerings — which include cloud infrastructure and applications — are on a $10 billion quarterly run rate. The security business more than doubled, to $1.5 billion.

“Any way you look at it, this is a strong finish to the year,” said outgoing Chief Financial Officer Martin Schroeter, who is transitioning to a new role as senior vice president of IBM Global Markets.

Analyst Patrick Moorhead of Moor Insights & Strategy agreed that things are looking up for Big Blue. “While one data point doesn’t make a trend, the movement back to overall company growth and big cloud and strategic imperatives growth give the company momentum going into 2018,” he said.

IBM isn’t yet hitting on all cylinders. The company’s large analytics business grew only 6 percent, indicating that the company continues to struggle to take full advantage of the Watson platform. Executives told analysts on the company’s conference call that Watson is doing well in the healthcare, financial services and “internet of things” markets. But without elaborating, Schroeter added, “We were disappointed by the performance of a few of our analytical offerings.”

Indeed, Ralph Finos, an analyst with SiliconANGLE sister research company Wikibon, said the quarter’s upside was almost entirely from mainframe revenue, along with a 2.7 percent boost from currency differences.

“Cognitive Cloud was the only other bright spot, so maybe it has some legs,” he said. “Otherwise Cognitive was terrible. Cloud in Technology Services and Cloud Platform was really disappointing.” Overall, he said, the after-hours stock decline was “well-deserved. This continues to be painful.”

Gross profit margins of 48.2 percent in the quarter and 45.8 percent for the year were both down from 2016, reflecting higher operating expenses that executives blamed on currency conversion rates and strategic investments. Overall, they said, IBM has turned the corner on its revenue slide and should deliver year-over-year increases in the first quarter of 2018, although they declined to speculate about specifics.

“We’ve been doing a lot of heavy lifting to reinvent our business, and we’re entering 2018 with a stronger revenue profile than a year ago,” said incoming CFO James Kavanaugh. “We do expect revenue growth in 2018. Stabilization driven by the continued improvement in our cloud business will start in the first quarter.”

The revenue turnaround wasn’t a surprise, given the anticipated boost from sales of IBM’s new z14 mainframe, which shipped last summer. IBM obliged with 28 percent growth in systems revenue, driven by a more than 70 percent increase in z sales. Hardware performance was strong across the board, though, with 50 percent growth in Power Systems and the fourth consecutive quarter of growth in storage products.

“We are very pleased with our overall systems performance, and that goes beyond mainframe,” Kavanaugh said. “This is the first year in a long time that we’ve grown storage four quarters in a row. We’re very pleased with our system portfolio.” The company shipped more raw compute power in the fourth quarter than in any quarter in its history, he said.

Less stellar was performance of the technology services organization, which saw revenue fall 4 percent, to $9.4 billion. Growth in software-as-a-service businesses offset continuing declines in technical support and infrastructure services. IBM is reported to be planning a major consolidation of those operations, whose margins are less than half those of the systems and software businesses.

Although some of its competitors have pared down or divested their services organizations in recent years, executives said its own services continue to be a major generator of new business, particularly for IBM’s cloud offerings. “We have north of a $120 billion backlog in our services business that we’re moving to the cloud,” Schroeter said.

IBM had strong free cash flow of nearly $13 billion for the full year, up 11 percent from 2016. The company returned 75 percent of that amount to shareholders, sustaining a dividend that has made it the stock a favorite of institutional investors.