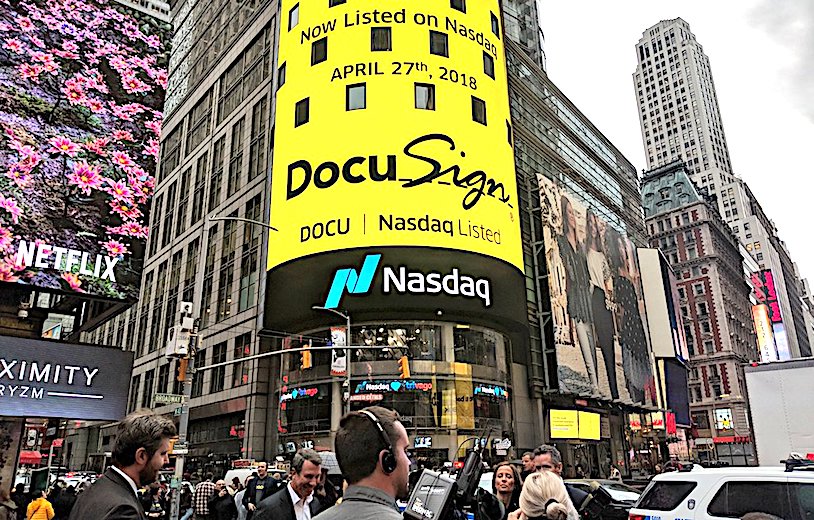 The IPO wave rolls on: DocuSign and Smartsheet shares jump on their public debuts

The wave of initial public offerings of technology companies hasn’t crested yet, as two more hit the market Friday — both opening well above their offering price.

DocuSign Inc. saw its shares jump more than 35 percent and Smartsheet Inc.’s shares rose more than 20 percent as they began trading Friday morning. They had already priced their IPOs late Thursday above their planned ranges, in a common pattern among many tech IPOs lately.

DocuSign, which allows businesses and people to do legally binding electronic signatures on documents, priced its IPO shares at $29 on the Nasdaq exchange, higher than the most recently planned range of $26 to $28 a share. The company raised almost $630 million at a valuation of $4.4 billion, selling at least 21.7 million shares, with 16 million shares coming from the company and the rest from existing shareholders.

A relatively old San Francisco-based company at 15 years old, DocuSign heads into its IPO having raised $515 million in venture capital from a Who’s Who of Silicon Valley venture capital firms. Competing against Adobe Systems Inc. and others, the company is somewhat of a hybrid when it comes to tech firms. Despite investing $300 million in technology and infrastructure for its platform, the DocuSign gets the vast majority of its revenue from professional services.

Smartsheet, meanwhile, priced its shares at $15 each on the New York Stock Exchange, again above a recently set range of $12 to $14 a share. The offering of 10 million new shares and 1.63 million shares from existing shareholders raised $150 million.

The company, also relatively old at 13, is based in Bellevue, Washington. It had raised a more modest $106 million. Although it’s not a household name, the cloud-based work management platform, focused on facilitating workplace collaboration, is used by more than 70,000 companies, including two-thirds of the Fortune 500.

Gene Farrell, Smartsheet’s senior vice president of product, said in an interview with SiliconANGLE that cloud services have enabled the creation of a new market in which regular business people can get access to applications without having to go through a lengthy process of persuading the information technology department to make them available. “All these software-as-a-service applications have made it easy to find solutions and use them without having to engage IT,” he said, meaning companies such as Smartsheets can build a business fairly quickly now.

The pair of IPOs builds on what’s shaping up to be possibly the best year for initial public offerings since the last tech boom at the end of the late 1990s. Pivotal Software Inc., Zscaler Inc., Spotify AB, Zuora Inc. and others have gone public this year, and more are coming soon, such as Carbon Black Inc. and Pluralsight LLC.

In an interview with SiliconANGLE April 8, Aaron Levie, chief executive officer of Box Inc., said he believed that we are now in a “real wave of IPOs,” adding that thanks to a healthy if volatile stock market and a raft of “unicorns,” or companies with a billion-dollar private valuations, the rash of IPOs finally proves that many have sustainable businesses.

And there will be more to come, with some 200 unicorns still private, said Rohit Kulkarni, managing director and head of research of SharesPost Inc., which arranges sales of stock in private companies. “It appears the time is right for cloud or enterprise software-as-a-service companies,” he said in an email.

In the last two years, according to SharesPost data, 18 companies’ IPOs topped their recent private valuations, while nine had “down-round” IPOs, but there have been none of the latter so far this year. But the success of these IPOs doesn’t necessarily mean many of the biggest unicorns will be going public this year.

“We believe mega consumer Internet unicorns such as Airbnb and Uber will likely wait until 2019,” he said. “While large and successful consumer-oriented unicorns such as Spotify continue to get the bulk of media attention, the unglamorous enterprise cloud companies are the engines of the private tech growth asset class.”

Farrell agreed, saying the bankers Smartsheet worked with were “very busy” with other offerings as well. “You’re seeing a real trend of cloud-based companies moving to the public market,” he said, especially as cloud computing itself expands beyond basic infrastructure services into applications.

DocuSign trades under the ticker symbol DOCU, Smartsheet under the symbol SMAR.