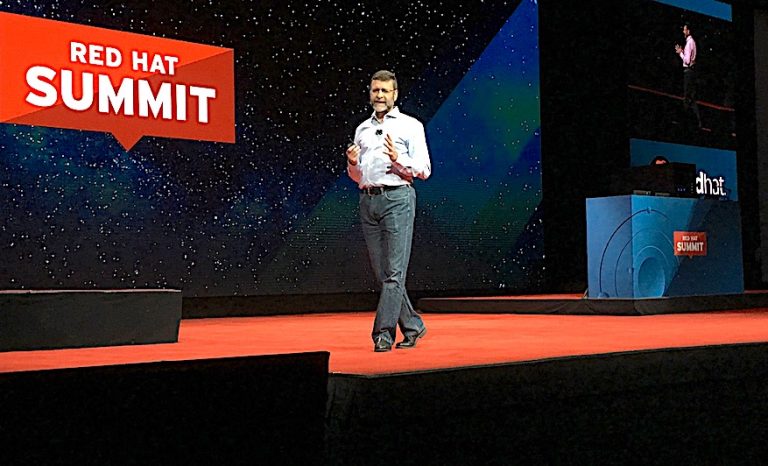 The tagline of this week’s Red Hat Summit in San Francisco is, “If you are interested in open-source, you should be here.” It looks like IBM Corp. and Microsoft Corp. took the advice to heart.

Tuesday’s news that IBM and Microsoft would be joining forces with Red Hat Inc. on a set of OpenShift platform initiatives further highlights the growing power of the hybrid cloud. Red Hat also announced a set of new solutions surrounding the container “orchestration” software Kubernetes, the container operating system Core OS and its evolving container strategy.

“Red Hat has been a bigtime winner by making some good bets,” said John Furrier (@furrier), co-host of theCUBE, SiliconANGLE Media’s mobile livestreaming studio, during the kickoff of the Red Hat Summit. “It’s all pointing to cloud economics, cloud scale and the role of software and data.”

Furrier was joined at the conference by guest host John Troyer (@jtroyer), chief reckoner at TechReckoning, and they discussed the success of Red Hat’s big bets on technology and the importance of its container strategy, following keynote presentations from company executives. (* Disclosure below.)

IBM tightened its relationship with Red Hat by extending IBM Cloud Private and Cloud Private for Data platforms, plus middleware to the Red Hat OpenShift Container platform. Red Hat also expanded its offerings for enterprise developers through a new agreement to run container-based applications across Microsoft Azure and in on-premises environments.

One of the big bets Red Hat has made recently involved the acquisition of CoreOS in January. The role of the acquisition in the company’s overall strategy became clearer on Tuesday when it was announced that CoreOS automation technologies would be integrated with Red Hat’s container solutions portfolio. Containers are software that enables applications to be run unchanged across different kinds of computer systems.

“No one was quite sure what the supersmart rocket scientists at Core OS were doing here,” Troyer said. “Now we know a little more.”

Red Hat also further strengthened its container capabilities with the news that it would introduce Kubernetes Operators, a method of packaging, deploying and managing a Kubernetes application, to the company’s OpenShift ecosystem, simplifying the delivery and testing of Kubernetes on the Red Hat platform. The company said that more than 60 software partners have already committed support for the Kubernetes framework initiative.

“Red Hat made a bet three to four years ago on Kubernetes,” Furrier said. “They are looking like geniuses now because of the results.”

At the conference, attended by about 7,000 people, Red Hat sought to leverage its new tools to hold its position as a leading force in open-source software. At the keynote presentations on Tuesday, company executives chose to withhold comment on the flurry of announcement released just before they took the stage, preferring instead to guide attendees through live demonstrations of Red Hat’s technology.

The subtext is that enterprises had better embrace the hybrid cloud and quickly, or risk getting left off a fast-accelerating train. “Hybrid cloud is the only practical way forward,” Paul Cormier (pictured), Red Hat’s president of products and technologies, said during his keynote remarks. “It will be as impactful as anything we’ve ever seen before.”

The demonstrations on Tuesday ranged from showing developers how they might use Red Hat’s OpenStack Platform Director to build and deploy applications, to enlisting the Red Hat CloudForms Management Engine for converting a Windows virtual machine to a Linux-based kernel virtualization infrastructure.

“Developers care most about having a platform that creates consistency for their applications,” Cormier said. “It’s the goal of Red Hat to seamlessly get you from the old world to the new world.”

Red Hat’s view of the new world is decidedly multicloud. One of the demonstrations used Red Hat Insights for collecting anonymized data from various customer environments and then load-balanced deployments across Amazon Web Services Inc. and Microsoft Azure public clouds.

“We saw this need to bring innovation to solve real-world problems in the enterprise,” Cormier said. “Open-source and Linux-based computing is now an industry norm.”

A key factor for Red Hat’s success moving forward will be continued adoption of OpenShift, the open-source container application platform for Kubernetes support. Tuesday’s news appears strongly directed toward positioning the platform as central to the hybrid cloud world.

“The story is the cloud impact in the world of open-source and business,” Furrier said. “OpenShift now can become a key platform as a service that really enables new applications and new management capabilities.”

Here’s the complete analysis, and there will be more coverage of the Red Hat Summit event from SiliconANGLE and theCUBE. (* Disclosure: TheCUBE is a paid media partner for Red Hat Summit. Neither Red Hat, the event sponsor, nor other sponsors have editorial control over content on theCUBE or SiliconANGLE.)