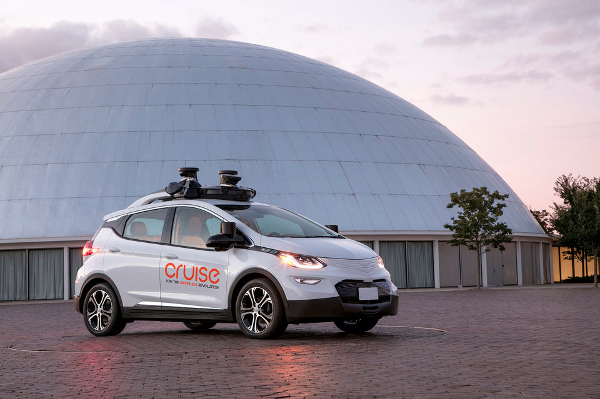 GM’s Cruise and DoorDash team up for autonomous food deliveries

The companies this morning announced plans to launch an autonomous food delivery service in San Francisco. The pilot will see Cruise’s self-driving Chevy Bolts (pictured) pick up restaurant orders and groceries in select parts of the city. Orders will be processed through DoorDash’s delivery network, which includes 90 of the top 100 restaurant brands in the U.S. along with countless smaller partners.

The startup also has significant geographic reach. In August, DoorDash disclosed that it was on track to close 2018 with a presence in 2,000 cities, which should make it possible to smoothly expand the self-driving car pilot beyond San Francisco over time.

The companies didn’t disclose how many self-driving Chevy Bolts will be hit the road. Their initial fleet is likely to be fairly limited in size, since Cruise has a total of 180 vehicles registered with the California Department of Motor Vehicles.

The partnership will give the GM subsidiary a good opportunity to test how its cars perform when interacting with real-world customers. Plus, it will enable Cruise to compete on a more level playing field with other players in autonomous driving. Ford Motor Co. and Google LLC’s Waymo unit are both already experimenting with robotic food deliveries.

“Delivery is a significant opportunity for Cruise as we prepare to commercialize our autonomous vehicle technology and transform transportation,” Cruise Chief Executive Dan Ammann said in a prepared statement. Ammann moved into the CEO position earlier this week after previously serving as the president of GM.

For its part, DoorDash is gaining a head start on a technology trend that could potentially reshape its market. The partnership comes at a time when the startup’s competitors are also pursuing initiatives to automate their operations. Just last month, Postmates Inc. debuted an internally developed rover that it said can make up to a dozen deliveries per day.

DoorDash and Cruise said their autonomous delivery service will launch in the coming months.