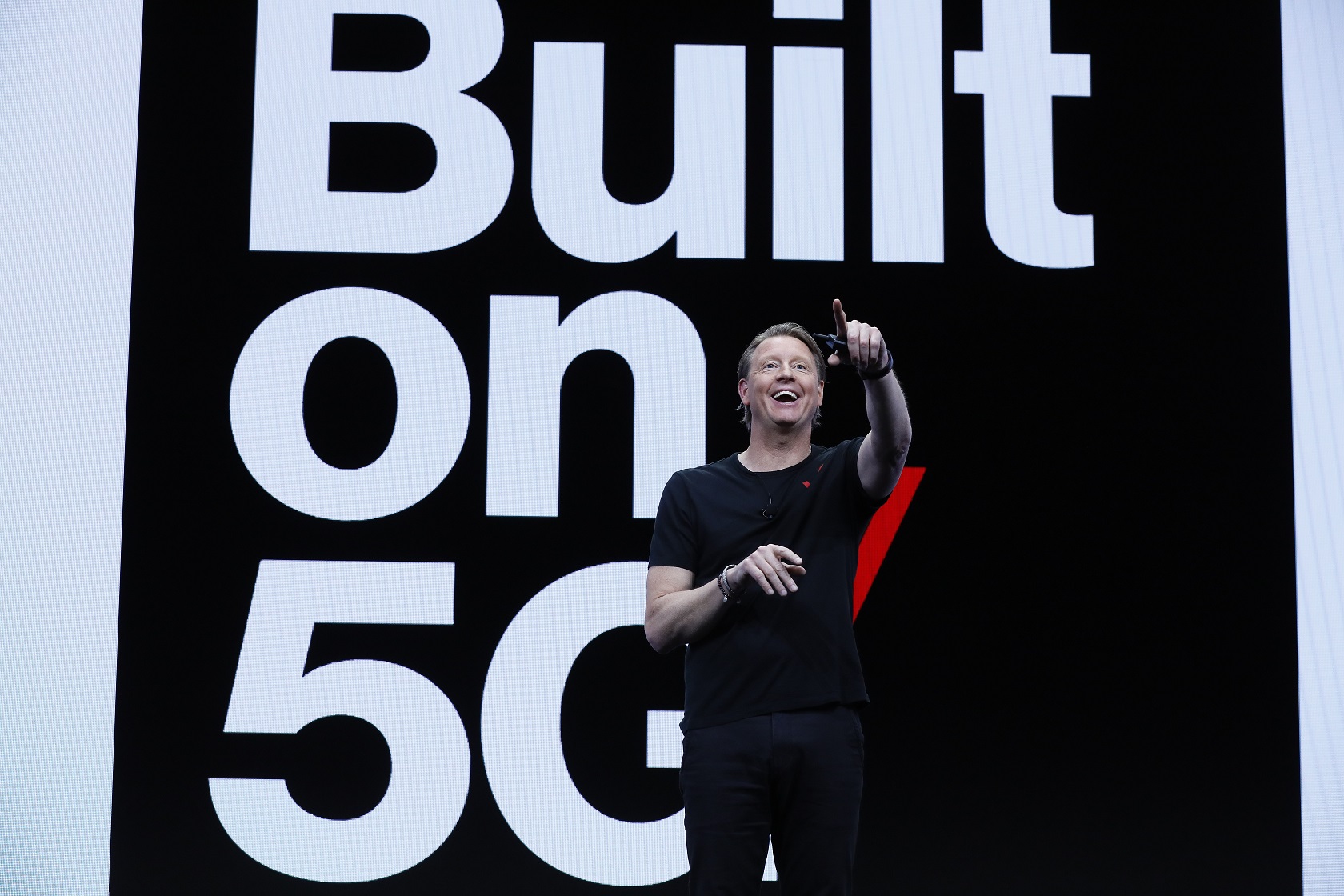 Contrary to the preshow hype at the CES consumer electronics show this week in Las Vegas, 2019 will not be the year that 5G fully arrives. Not even close.

But the fifth-generation wireless standard is on the way and its long-term impact promises to be huge. That’s the takeaway from nearly three days of speeches and news conferences offered by leaders from two key influential groups in the timetable for 5G deployment: carriers and chipmakers.

“5G is the promise of so much more than we’ve ever seen in wireless technology,” Hans Vestberg (pictured), chief executive of Verizon Inc., said during his keynote appearance on Tuesday. “5G will change everything.”

The use cases for 5G could well be significant. With estimates of 10 to 100 times the data speeds of 4G networks and latency potential down to a single millisecond, the impact will be noticeable.

Vestberg was joined on the CES stage by Mark Thompson, CEO of The New York Times, who described the ways that 5G will have a dramatic impact on how his organization covers news in real-time. The faster speeds will allow mobile users to download movie-length content in seconds, for example.

Other guests of the Verizon CEO included the owner of a drone company who described the importance of 5G for monitoring the nation’s energy infrastructure and a physician who envisioned a future where 5G-powered augmented reality will help surgeons improve complex medical procedures.

However, for a technology that could reshape the modern world as we know it, CES attendees might be forgiven if they left the major tech gathering this week feeling shortchanged on specifics and anything resembling a timetable for mass 5G implementation.

Onramps for the enterprise

Yet enough tantalizing details emerged that it’s now possible at least to envision a few onramps as the 5G highway gets built. And one of the key 5G enterprise solutions will involve edge computing.

“For us, 5G is a catalyst technology, the connective tissue between cloud and the edge,” said Pete Bernard, principal group program manager at Microsoft Corp., during a CES panel discussion on Wednesday. “5G brings a lot to the table in terms of the interconnect to the cloud.”

The Microsoft executive offered one example where 5G technology will enable the intelligent edge: A security camera in a retail store executes analytics through Azure Stack on a back-office platform, which then leverages machine learning stored in the Azure Cloud. “All of that can be seamless with 5G,” Bernard said. “Those kinds of scenarios will become a lot more possible.”

The combination of 5G and edge computing is expected to help carriers manage the data transfer process as well. Backhaul data transfer that largely takes place behind the scenes could be shifted for better results.

“We won’t have to pull a lot of data across the backhaul to the data center and back again,” Alicia Abella, vice president of operational automation at AT&T Inc., said Wednesday. “You can combine 5G and edge to drive even better services and applications.”

Before carriers can reap the benefits of 5G, the infrastructure has to be built first. Major chipmakers will play a key role in how the technology is deployed and there were a few announcements coming out of CES worth noting.

Intel Corp. announced on Monday that it had developed a system on a chip for 5G, named Snow Ridge, that will be used in wireless base stations. The promise of Snow Ridge is that it can deliver 100 gigabit-per-second data rates and serve multiple data streams.

And Qualcomm Inc. declared at a press conference on Monday that its Snapdragon 855 mobile platform and X50 5G modem would drive 30 5G enabled devices in 2019. “The impact of 5G is going to be significant,” said Pete Lancia, vice president of marketing, at Qualcomm’s press event. “It will remove any barriers for invention.”

Intel’s focus on a SOC for wireless base stations points to an interesting feature about 5G: It will require a lot more cell antennas. The reason is that although the millimeter-wave frequencies upon which 5G is based deliver faster data speeds, they also have a shorter range. Get ready to see more antennas sprouting in heavily populated areas.

“The network itself will become more dense,” Craig Farrell, chief technical officer of telecom at IBM, explained during a Wednesday panel discussion. “You will see deployments of more small cell devices.”

For the moment, the real action is with the carriers. AT&T has been active over the past year in bringing 5G-equipped hardware to markets across the U.S. The company claims more than 400 markets for its “5G Evolution,” an initiative focused on upgrading cell towers to provide a runway for 5G. The carrier has also deployed 5G mobile in 12 U.S. cities, with plans to add seven more in early 2019.

“We have put in place a 5G strategy that we’ve significantly accelerated,” Mike Zeto, vice president of AT&T IoT and general manager of Smart Cities, said in an exclusive interview with SiliconANGLE. Zeto has been involved in a program for the city of Portland that installed data-transmitting sensors at three of the city’s deadliest intersections to cut down on the carnage.

It’s an example of how future 5G connectivity and data processing at the edge could have an impact in making localities safer. “The use cases will become clearer as people understand 5G,” Zeto said.

As the story for 5G evolves, competition between carriers is intensifying. AT&T came under fire from Verizon over the addition on Monday of a “5G E” connection icon on the screens of its smartphone customers.

The “E” means “evolutionary” technology for existing 4G networks, according to AT&T. Verizon wasn’t buying it. The carrier took out a full-page advertisement in national publications this week under the headline “When we say ‘5G,’ we mean 5G.”

AT&T CEO John Donovan fired back in his CES appearance on Wednesday afternoon. “Our competitors are frustrated,” Donovan said. “I love the fact that we broke our industry’s narrative two days ago. If I occupy beachfront real estate in our competitors’ heads, that makes me smile.”

The sniping between carriers this week at CES did little to hide the obvious: A lot of work still remains before 5G will become a meaningful part of the tech equation.

“2019 is the down payment,” said John Smee, vice president of engineering at Qualcomm. “The real question is where we’ll be three to four years from now.”