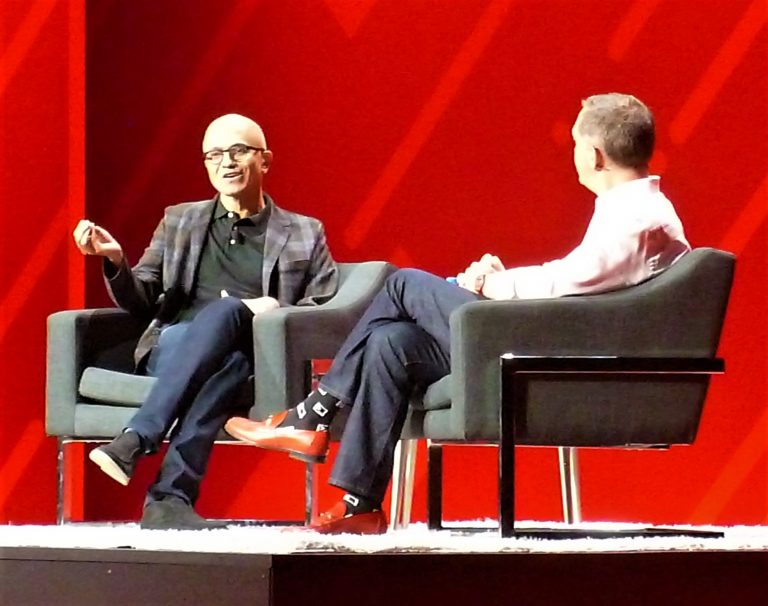 In a scene that would have been surreal five years ago, Red Hat Inc. bookended the keynote session of what will likely be its last user conference as a public company with appearances by the chief executives of two companies that were once bastions of proprietary technology: IBM Corp. and Microsoft Corp.

But the world is a different place now, as evidenced in part by Microsoft’s embrace of Red Hat OpenShift on its Azure cloud earlier in the day and IBM’s planned $34 billion acquisition of Red Hat, which is set to close in the second half of the year.

“The future will be built on open source,” IBM CEO Ginni Rometty said in an onstage interview today with Red Hat CEO Jim Whitehurst at Red Hat Summit 2019 in Boston. “Red Hat Enterprise Linux is the world standard for clients who choose a secure open stack.”

Rometty drew cheers from the crowd when she stated that IBM is committed to running Red Hat as an independent business unit. “It’s not like I have a death wish over $34 billion,” she said. “I’m not buying them to destroy them. I want them to be successful.”

Microsoft CEO Satya Nadella (pictured, left) was loudly cheered by the packed house of Linux enthusiasts when he sat down for an interview with Whitehurst (right) near the end of the keynote session, a reflection of how far Microsoft has come in making peace with the open-source phenomenon under his leadership. Although Nadella said nothing about his company’s future open-source plans, he noted that “having interoperability, support for open source and standards is going to reduce friction for everyone,” adding that that principle also applies to the .NET interoperability framework that Microsoft is transitioning to open-source licensing.

“We’re very committed to the Red Hat partnership because it’s driven by what customers expect of us: Be committed to open source and be great stewards of GitHub,” he said, referring to the open-source code repository that Microsoft acquired for $7.5 billion last fall.

Apart from the executive endorsements, the opening keynote was mostly a love letter to containers, the portable operating environments that have taken enterprise information technology by storm and that are getting a major push from Red Hat in the form of its OpenShift container orchestration platform.

Tom Gilbert, global head of cloud at Deutsche Bank AG, drew squeals of delight from the audience when he announced that the bank is running 25,000 container instances in production. “This is about expanding our possibilities; we can now write once and run anywhere,” he said.

Exxon Mobil Corp. has more than 130 development teams working on containerized platforms. “It has changed our views of how quickly we can deploy a custom solution,” said Audrey Reznick, an Exxon Mobil data scientist. “Containerization is life-changing to my customers,” who are business users.

Lockheed Martin Corp. is using containers as part of a broader drive to embrace agile principles and accelerate a process for building new aircraft that used to consume up to 10 years in development and test. A process overhaul at the defense contractor has sped up approvals from months to days, cut hardware acquisition times to 10 days from two years and improved forecasting accuracy by 40%, said Michael Cawood, a Lockheed Martin vice president. “With the Red Hat partnership we can see the ability to develop a new capability and fly it the next day,” he said.

The conference continues through Friday.