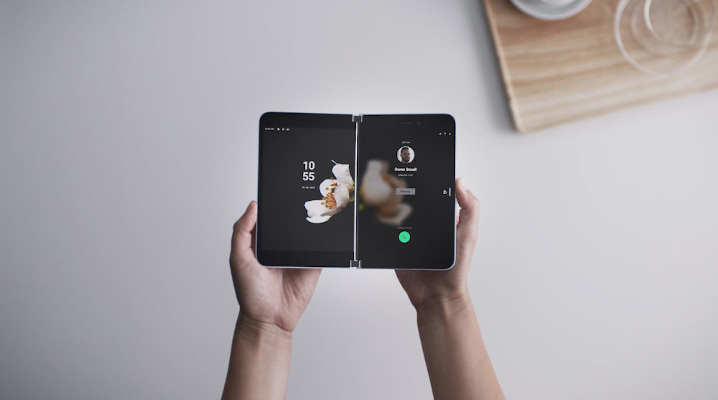 Microsoft Corp.’s Surface tablets were expected to be the main highlight of its hardware event in New York today, but the company had other plans.

Alongside a new Arm-powered Surface Pro X, the dual-screen Surface Neo tablet and updates to existing devices, Microsoft debuted a surprise: a homegrown foldable phone dubbed the Surface Duo. When it hits stores in the 2020 holiday season, it could put Microsoft at the forefront of a mobile industry where it has had only a marginal presence for years.

The Surface Duo isn’t merely a Microsoft-branded clone of the Galaxy Fold. Instead of a single big screen that folds in half, the company has equipped the device with two 5.6-inch displays that are capable of functioning almost as if they were separate devices. Users can run two different apps at the same time, or stand the Surface Duo upright like a laptop and use the bottom display as a keyboard.

The Surface Duo runs a modified version of Android that Microsoft has tweaked to look more Windows. The company also partnered with Google LLC to let users download apps directly from Google Play.

Under the hood, meanwhile, the Surface Duo sports Qualcomm Inc.’s  Snapdragon 855 processor, the same chip that powers the Galaxy Fold. But the company didn’t divulge any further specifications, which may be tied to the fact that the device’s design apparently isn’t final. Microsoft hardware head Panos Panay told Wired that the Surface Duo’s current iteration lacks a rear camera but said the setup could change.

“Surface Duo is the best chance Microsoft has ever had to drive success in smartphones,” Patrick Moorhead, president and principal analyst at Moor Insights & Strategy, told SiliconANGLE.

The Surface Duo is only one of two dual-screen devices Microsoft unveiled today. The other is the Surface Neo, which is essentially a larger, Windows-powered version of the phone that likewise offers the ability to run two applications at the same time.

The proportions are different and so are the use cases. The Surface Neo’s displays measure nine inches across, which allows them to turn into one big 13-inch screen when the tablet is folded out. But the most interesting applications for the tablet come into play when the two panels run separate applications.

A worker in a conference can stand up the Surface Neo like a tent so that the outside display, the one facing away from the user, shows a presentation while the inner screen shows action items for the meeting. Or the worker could read a business document on one panel while taking notes in the other. Even more use cases open up with the detachable keyboard accessory Microsoft is launching in conjunction: A worker could turn the Surface Neo into a proper laptop or type remotely.

The success of the device will likely depend in no small part on how well software developers take advantage of its unique features. “This device needs a lot of application and Windows 10X development work for apps to flow perfectly,” Moorhead said. “Applications and information will need to naturally float from screen to screen.”

The Surface Neo will launch in the 2020 holiday season.

The Surface Pro X is an 13-inch tablet that ditches the Intel Corp. silicon Surface devices have used so far. Instead, it runs on a custom version of Qualcomm’s Arm-based Snapdragon 8cx processor that Microsoft engineers helped develop. Dubbed SQ1, the chip features a dedicated machine learning accelerator and provides three times as much performance per watt than the 2018 Surface Pro 6.

The SQ1’s integrated graphics card is also based on a custom design. Microsoft claims that the unit provides more than 2 teraflops of performance.

The Surface Pro X will take up a spot on the top end of the Surface tablet lineup when it becomes available. It will start shipping on Nov. 5 at a $999 price point and is available for preorder today.

At the New York hardware event, Microsoft executives also took the opportunity to showcase new versions of two existing devices. The 12.3-inch Surface Pro 7 tablet carries over the look of last year’s Pro 6 but not the internals, swapping the previous chip options for 10th-generation Intel processors that offer twice as much performance. The Surface Laptop 3, the other new device, now comes in a 15-inch version on top of the existing 13.5-inch variant.

One of Microsoft’s goals when building the notebook was to offer more hardware options. Customers who choose the 15-inch Surface Laptop 3 can order their device with an Advanced Micro Devices Inc. chip instead of the standard Intel silicon. It can also be equipped with 32 gigabytes of memory and 11 terabytes of flash storage, while the 13.5-inch variant is limited to 16 gigabytes of memory.

Last but not least: Surface Earbuds

Capping the flurry of new products is the Surface Earbuds, the least expensive but far from least interesting device unveiled today. It’s a pair of unusually shaped, slightly oversized wireless earbuds that can manage up to 24 hours of battery life thanks to a charging case.

Microsoft is looking to court knowledge workers and regular consumers alike. An integration with Spotify will make it possible to start playing music instantly by tapping a touch-sensitive section of the earbuds three times. Office 365 users, in turn, can take advantage the Surface Earbuds’ four built-in microphones to pull up emails and calendar appointments with voice commands.

“It’s a crowded market, but I think Microsoft can differentiate with its touch controls, connection to Microsoft 365 environments and breadth of channels,” Moorhead said.

The Surface Earbuds will ship later this year for $249.