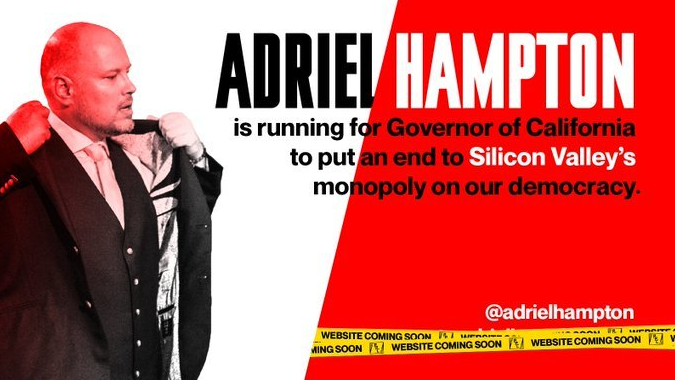 A California resident on Monday registered as a candidate for the governor of the state with the intent of exploiting Facebook Inc.’s controversial ad policy for politicians, but Facebook has apparently stopped him in his tracks.

The man in question, Adriel Hampton, has no intention of actually becoming governor, but it seems he is concerned about Facebook’s decision to run political ads on the platform that don’t have to be fact-checked like other ads.

He’s not alone. This week it was reported that over 250 Facebook employees sent a letter to Facebook Chief Executive Mark Zuckerberg expressing their discontent with the political ad policy. The company has so far not budged, saying it remains “committed to not censoring political speech.”

Hampton, who runs a marketing business in San Francisco, said with his new status he would start running false ads about Zuckerberg, other executives and President Donald Trump.

“The genesis of this campaign is social media regulation and to ensure there is not an exemption in fact-checking specifically for politicians like Donald Trump who like to lie online,” he told CNN Tuesday. “I think social media is incredibly powerful. I believe that Facebook has the power to shift elections.”

Only a day after Hampton registered, though, Facebook seems to have stopped him in his tracks – at least in terms of him exploiting his position to run false ads. “This person has made clear he registered as a candidate to get around our policies, so his content, including ads, will continue to be eligible for third-party fact-checking,” a spokesperson for Facebook told CNN in a separate article.

Hampton then fired back, stating that he was being targeted unfairly by Facebook and that’s not lawful. He said he not only plans to sue Facebook now, but is in the process of recruiting people across the country to run for political positions to do what he intended to do.

“If one falls, a hundred will rise,” tweeted Hampton. “I just landed a body blow on a $531 billion advertising company with $19 and my Twitter friends. This is just getting started.”