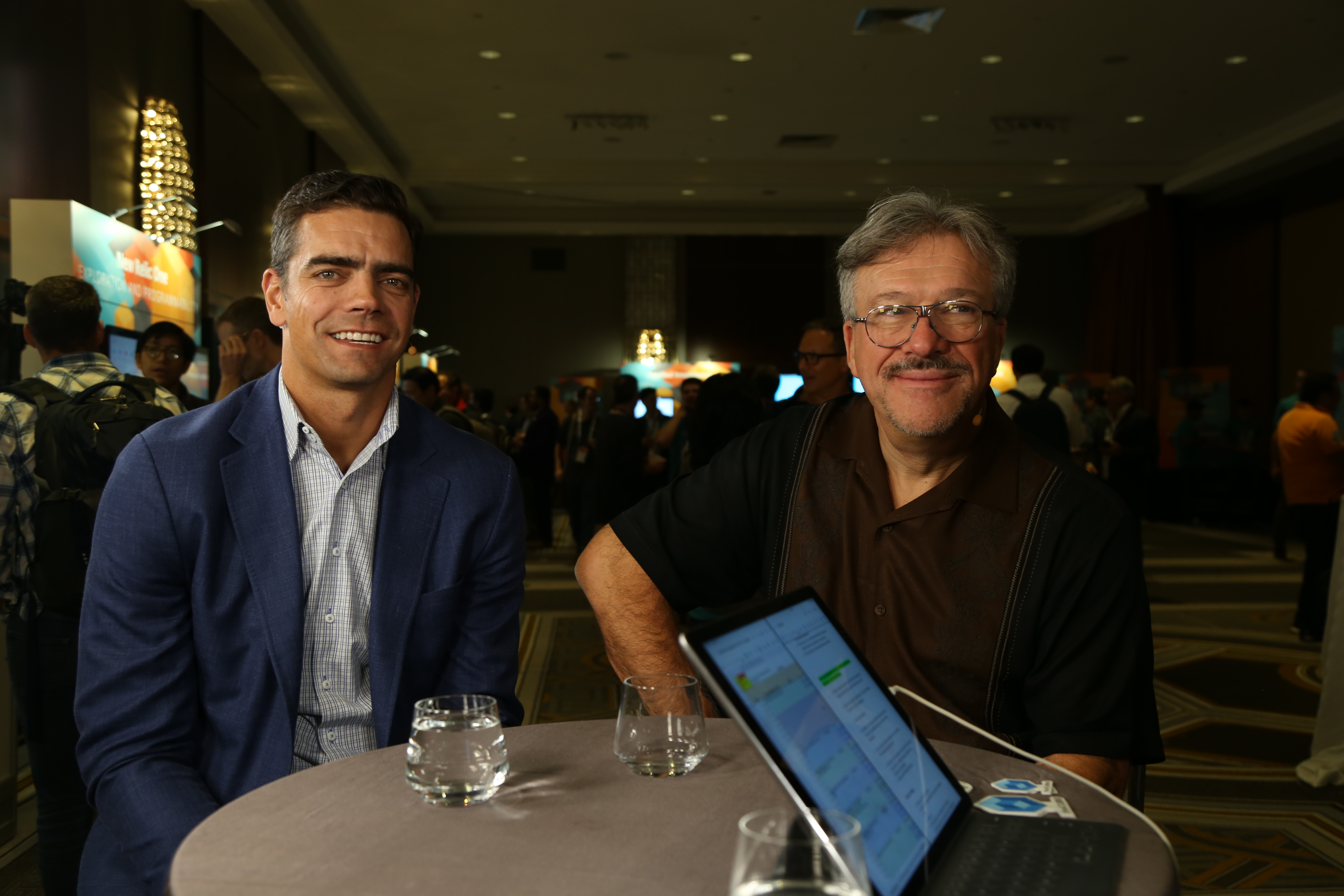 Cloud migration is like a comet with a huge trailing tail. The pioneers blazed to the cloud, reinventing how the world does business. Following behind, companies large and small started to migrate data and applications to the cloud.

The journey turned out to be filled with false leads and twists and turns. Today, companies have to decide from a myriad of options as multicloud and hybrid models prove safer and more practical than the all-in public cloud model that marked the first adopters. Slow and safe risks are being left behind as solution providers move faster and grab the market share. But unprepared enterprise migrations can lead to costly purchase mistakes and even potential security breaches.

“You have to assume that most enterprises are moving to the cloud,” said David McCann (pictured, right), vice president of the AWS Marketplace, service catalog, and migration services at Amazon Web Services Inc. “The question is: At what speed?”

McCann and Todd Osborne (pictured, left), vice president of alliances and channels at New Relic Inc., spoke with Stu Miniman (@stu), host of theCUBE, SiliconANGLE Media’s mobile livestreaming studio, during the New Relic FutureStack event in New York City. They discussed the partnership between New Relic and AWS and how it helps customers navigate a successful and smooth cloud migration (see the full interview with transcript here). (* Disclosure below.)

Miniman: New Relic and AWS have been partners for many years. Can you catch us up to speed on the partnership and how it’s been evolving?

Osborne: For many years we’ve worked together with technology integrations. We’ve got dozens of them that natively monitor a bunch of different AWS services. But the most exciting thing really came to life around the middle of last year. We have this massive opportunity for more and more applications, and more and more workloads to move to the cloud. AWS brought us several different challenges related to that, and we responded at AWS re:Invent last year by launching what we call the Cloud Adoption Solution.

That is a process that links up with the Amazon migration acceleration program and uses New Relic as the platform to help with migrations from beginning to end. So, starting with the planning phase of the process, getting the information you need to have a successful migration, and designing a successful migration. Then, troubleshooting anything that may occur during the migration. And post migration helping to optimize the performance and cost of that optimization and run phase.

We’ve seen a massive shift where it’s not about just simple lift and shift anymore. Almost all customers that are migrating now are also thinking about modernizing their software stack. Running on containers, using Kubernetes, [and] running microservices, which is New Relic’s sweet spot at the application space. So we’ve evolved, starting with migration, evolving into modernization. It’s an amazing partnership working with AWS.

Miniman: Migration services are something we hear a lot about in association with Amazon. The company has a very broad ecosystem, and the AWS marketplace is the closest thing to an enterprise app store that exists today. Tell us what’s special about the partnership between AWS and New Relic.

McCann: We’ve spent a lot of time at AWS designing a migration methodology. Our professional services team is really delivering a playbook directly to our customers on how to migrate. And we’ve certified over 50 migration consultant partners. But all the migrations hinge on a customer knowing what they have and whether they’re going to migrate it. And to know what you have; you have to go through application discovery. New Relic’s tool is widely installed, so they already have the visibility to a lot of the installed apps.

At the end of last year, we bought TSO Logic, a business case tool on whether to move an application running on-prem into the cloud. By integrating New Relic into TSO Logic, we can actually take the instrumented visibility that New Relic brings to the table and pop it right into the tool. We’re now giving the TSO tool to all of our solution architects and all of our consulting partners. And New Relic feeds the data right into the TSO tool. So that’s a huge mechanism for accelerating migration.

Miniman: So, it’s clear your teams have been working closely together, iterating over the last year or so. What more should we expect from this partnership in the near future?

McCann: So, the area I see that all customers are paying attention to is spend management. You migrate your applications to the cloud; you establish a cloud operating model where you license out software through marketplace you’re now running it.

So, last week what we launched an integration between [AWS IT services management tool] Service Catalog and another tool our customers have called AWS Budgets. Say you want to grant the team access to a resource and on the tag of the template, you actually want to give that resource template a budget. That is actually under an API. So, there’s an AWS Budget API, there’s a Service Catalog API, and a whole raft of New Relic tools.

One of the things announced today was the ability to essentially build these new widgets using a react-widget and pull data from other sources. So that’s the area some of the customers are looking at — taking your spend widget and connecting it into both AWS Budgets and Service Catalog.

Osborne: Every migration has a bunch of nuances, and every optimization story has a bunch of nuances. But [we ask] how can we create the right open-source applications which are a starting point, and put the repository up on GitHub, and then allow customers and partners to go and fork that. Do what they want to match a standard use case. Then it needs a little bit of a tweak. A little bit of customization based on whatever that customer’s situation is.

We’ve enabled the entire community of millions of apps that are going to migrate to the AWS cloud over the next couple of years. We’ve enabled that with what we’ve launched today. So, the future is infinity and beyond.