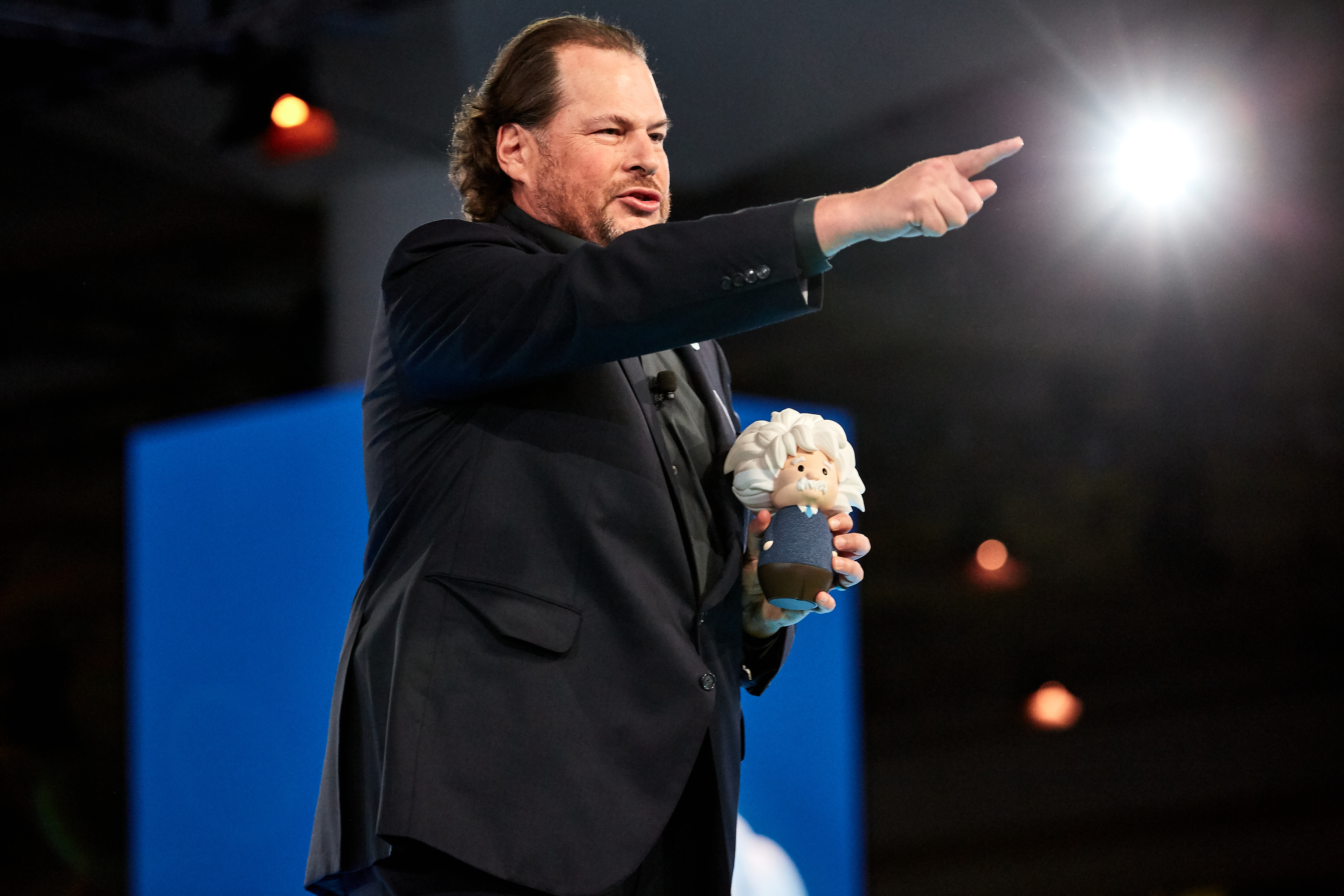 When the weeklong agenda at a tech conference includes a former president of the United States, the chief executive officer of Apple Inc. and a Grammy award-winning artist performing her hit song “Girl On Fire,” that’s heavy celebrity lifting.

Yet the real star at Salesforce.com’s Inc.’s annual Dreamforce conference this week may actually turn out to be an artificial intelligence-powered smart speaker dressed as Albert Einstein, which checked in at barely six inches tall (below).

At Dreamforce, the customer relationship management giant’s focus was more on enterprise clarity than celebrity, despite an eye-catching lineup of presenters that included appearances by former President Barack Obama, Apple CEO Tim Cook and pop star Alicia Keys. Through acquisitions, partnerships and a committed research and development effort, Salesforce is betting big on its Einstein AI platform, and the centerpiece of that strategy is voice.

“We’re really bringing voice across everything that Salesforce does,” Bret Taylor, president and chief product officer of Salesforce, said during a press briefing on Monday. “Voice makes it very easy to intuitively get data out of these business systems.”

Salesforce made a number of announcements on Tuesday to drive Taylor’s point home. The company introduced Service Cloud Voice, which unifies phone and customer relationship management data in a real-time centralized console, and Einstein Call Coaching as a way for businesses to gain insight from transcripts of sales calls.

In partnership with Amazon.com Inc. and its Alexa voice assistant platform, Salesforce rolled out a smart speaker cleverly outfitted in its Einstein image to demonstrate how voice technology can be just as useful in the board room as the living room. Starting in February, developers will be able to create custom Einstein Voice Skills for any CRM action, replacing manual data entry and improving enterprise workflows.

“This is the end of data entry and the beginning of data conversations,” said Richard Socher, chief scientist at Salesforce, during a conference presentation on Tuesday. “Voice is finally here.”

The journey to this week’s voice-driven releases for Salesforce actually began in 2016 when the company acquired Socher’s previous firm, MetaMind. As a Stanford doctoral student who had conducted extensive research in natural language processing or NLP, Socher brought his voice programming expertise inside the CRM giant and expanded the company’s AI team. 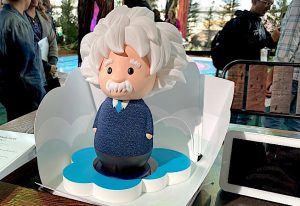 On Tuesday, members of Socher’s AI research group presented examples of technology developed in the Salesforce lab that are moving into open beta. One goal is to leave the dreaded realm where a user calls a customer service line only to be told that their call is important while being placed on hold for 20 minutes and forced to listen to bad music.

Instead, phone bots which operate 24/7 have the ability to access business data and respond in conversational, intuitive ways. In a live demonstration at Dreamforce, Salesforce AI researcher Caiming Xiong asked the bot to check on a pizza delivery and changed his order in mid-conversation.

“Our system is not just for a single task, it can add new tasks and even handle human interruption,” Xiong said. “The future of AI is conversational.”

Another member of Socher’s team demonstrated CTRL, a Conditional Language Transformer Model with voice-to-text technology developed by the Salesforce AI team. It is available on GitHub as an open-source project.

With 1.63 billion parameters, CTRL can generate entire blocks of text from only a pre-selected genre such as “press release” and a few seed words so the program understands what it’s supposed to write.

“We’re focused on trying to predict the future and the best way to predict is to actually create,” Socher said.

One way to predict the future for Salesforce is to track its active acquisitions path. In addition to MetaMind in 2016, the company also acquired Datorama, an AI-based marketing and analytics firm, in 2018. Since then, Datorama’s solutions have been used to integrate Salesforce on social media platforms, including Facebook Ads, and with Google Analytics. Salesforce also launched a marketplace in May where brands and agencies can create apps using Datorama’s AI capabilities.

However, it was Salesforce’s purchase of business analytics firm Tableau Software Inc. for $15.7 billion in June that received the major attention, vastly eclipsing the $6.5 billion the company spent to acquire MuleSoft Inc. last year. Tableau’s president and CEO, Adam Selipsky, was given a few brief minutes on the keynote stage Tuesday with Salesforce co-CEO Marc Benioff (pictured) to describe Tableau’s mission in the enterprise.

“We help people see and understand data, that’s it,” Selipsky said. “Any data, anywhere you want to use it. We’re really the Switzerland of data.”

Although the speculation since the acquisition has been that Salesforce wanted to complement its cloud strength with Tableau’s on-premises data intelligence technology, there were hints at Dreamforce this week that Salesforce’s work in NLP could be a big part of the overall plan. In a presentation at Socher’s session on AI advancements, researcher Xi Victoria Lin described work on querying multitable relational databases using natural language and indicated an interest in combining NLP with data analytics using Tableau.

A subtext to the announcements at Dreamforce this week is the reality that partnerships will be a key element of the Salesforce strategy going forward. There was a time not that long ago when Salesforce was a fierce competitor with Microsoft Corp. Yet, earlier this month, it announced that it would move its Marketing Cloud to Microsoft Azure. 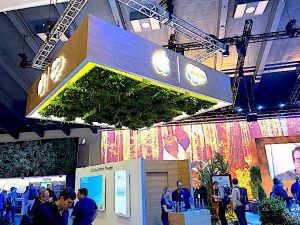 Amazon and Salesforce also strengthened their relationship this month with a deal to use an Amazon Web Services Inc. offering for Salesforce’s new Service Cloud Voice product.

And ties between Apple and Salesforce are clearly growing stronger, as evidenced by the presence of Tim Cook on the stage with Benioff on Tuesday during a Dreamforce event. Last year, the two companies announced an initiative to improve Salesforce products running on Apple devices and two new tools, including the use of Siri voice shortcuts, were made generally available this week.

Even industry legend Benioff appeared a bit starstruck as he greeted Cook in the same San Francisco theater where Apple co-founder Steve Jobs introduced the first iPhone in 2007.

“This is our dream that you would come here,” said Benioff, as Apple’s top executive strolled onstage. “I’m not Alicia Keys, though,” Cook replied.