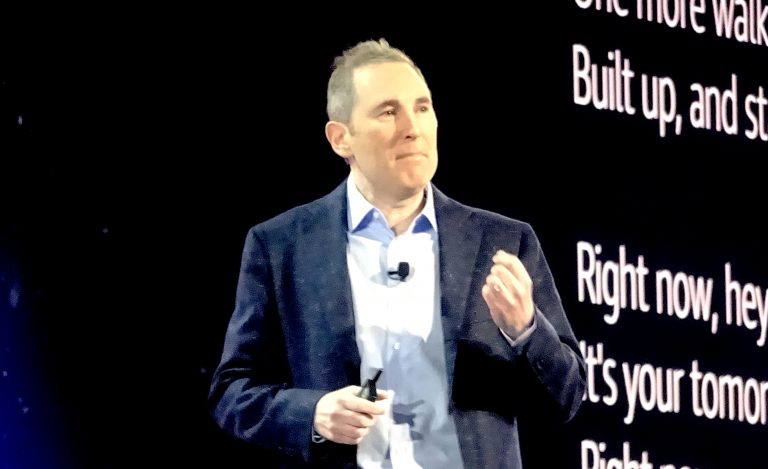 At re:Invent, Amazon beefs up its cloud with AI and takes it to the network edge

Among the headlining services are new, faster Arm-based Graviton chips intended both for so-called scale-out workloads for things such as containerized microservices and web servers, and for faster machine learning. It also announced a new version of Inferentia, its chip for machine learning inference, or the process of making predictions for services such as speech and image recognition. Both are available via AWS’ EC2 computing “instances” in its cloud.

Also on the machine learning front, AWS announced a number of new services that run on top of SageMaker, including Amazon CodeGuru, a new ML service to automate code reviews, and Amazon Connect, a contact center in the cloud complete with analytics on call sentiment and other factors. There’s also a new service called Kendra aimed at helping enterprises change how people can search for a wide range of data inside their companies.

Not least, AWS flagged a number of new services intended to make it easier to use Amazon’s cloud services both in corporate data centers and in so-called edge locations such as local offices and even smartphones and other mobile devices. In particular, Jassy said its Outposts service, which includes Amazon servers and software to bring the operational ease and computing scalability to private data centers, is now generally available, a year after it was introduced at last year’s re:Invent. AWS’ own “native” Outposts is available now, while its VMware on Cloud version will be available next year.

Perhaps the most interesting new service is one announced in conjunction with Verizon called Wavelength. The platform is intended to use faster 5G connections to applications that need very low latency in their networks. Verizon and AWS will integrate Wavelength with Verizon’s 5G Edge with an aim to connect 5G applications to AWS’ cloud services with fewer “hops” among network nodes, essentially bringing computing closer to data and services provided locally. Wavelength will start in Chicago but soon be provided more widely.

In the same vein, AWS introduced what it calls Local Zones, buildings that provide compute, storage, database and analytics services in local areas where neither Amazon nor a company has full data centers. The idea is that companies that need very low network latency for workloads such as movie creation or videogame design can get a way to do that without having to operate a data center locally. The service is starting in Los Angeles by invitation with plans to go wider soon.

Taken together, the features from Amazon.com Inc.’s cloud computing company are aimed at expanding AWS’ services to envelope — or “embrace and extend,” as Microsoft Corp. used to say — the private data centers traditional companies own and run today as well as an exploding array of “edge” devices from personal computers to smartphones to self-driving cars.

AWS Chief Executive Andy Jassy (pictured) sounded a theme the company is expected to emphasize in coming years as cloud services increasingly replace computing tasks done in on-premises data centers: Enterprises need to use cloud services not just to make targeted operations more efficient, but to transform their businesses in the same way the Ubers and the Airbnbs of the world have disrupted entire industries.

“The reason these bigger companies have started moving to the cloud is that … startups have been disrupting industry after industry,” Jassy said.

The new announcements during Jassy’s nearly three-hour keynote at the conference, expected to attract 65,000 developers and partners, followed an already considerable roster of new services and customers. On Monday, for instance, AWS introduced quantum computing services will be available on its cloud from three different startups. Amazon Braket platform will provide on-demand access to quantum systems from Rigetti Computing Inc., IonQ Inc. and D-Wave Systems Inc.

The conference, now considered the most important cloud computing conference of the year, continues all week, with more announcements expected Wednesday and Thursday.