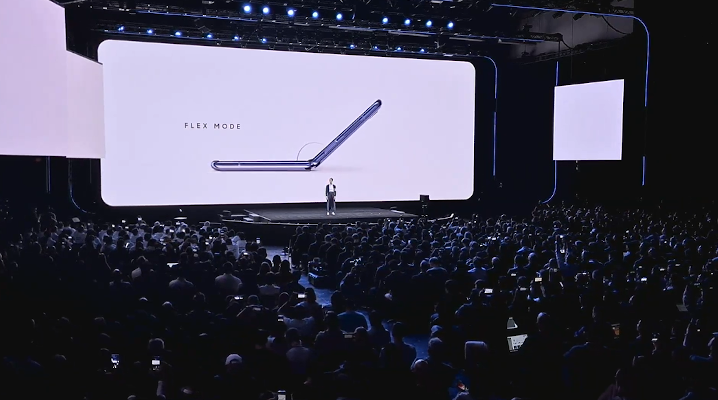 Samsung Electronics Co. Ltd.’s annual Unpacked event always garners wide attention in the consumer technology world because it’s where the company introduces its flagship smartphones. Today, at Unpacked 2020 in San Francisco, the company took things up a notch by unveiling its latest Galaxy S20 flagship alongside a brand-new foldable device that bends like a flip phone.

The standout feature of Samsung’s new foldable phone, the Galaxy Z Flip, is naturally its display. The 6.7-inch OLED screen provides a resolution of 2636 pixels by 1080 pixels and has a three-stop hinge in the middle that allows the handset to fold like a flip phone into a compact square.

Samsung envisions the reconfigurable chassis as much more than just a means of more conveniently carrying the phone around. Onstage, marketing director Rebecca Hearst said the Z Flip has a “Flex Mode” that makes it possible to prop up the device when it’s semifolded and use it like a miniature laptop. One half of the foldable display is on the bottom and displays app controls, while the second panel on the top can be used to hold a video call or take selfies.

These features are underpinned by a couple new enhancements that weren’t included in last year’s Galaxy Fold. First, the display is covered with glass rather than plastic, which Samsung said will let the Z Flip better handle regular use by allowing it to withstand up to 200,000 folds. And the hinge that keeps the two halves of the display together has been reinforced with a fiber-based shield to block debris.

“The folding mechanism feels solid, I am sure Samsung learned a lot from the Fold,” commented Patrick Moorhead, president and principal analyst at Moor Insights. The release of the Fold last year was temporarily pushed back because a faulty hinge design let debris enter the chassis and interfere with the display. “I believe the Flip will be a market success assuming there aren’t any reliability gotchas,” he added.

Underneath the folding screen, the Z Flip sports a Snapdragon 855+ processor, 8 gigabytes of memory and 256 gigabytes of storage. The internals are sandwiched between a 10-megapixel selfie camera on the front and a dual-lens rear camera system with a 12-megapixel ultrawide shooter.

Users will be able to interact with the cameras even when the Z Flip is closed through a 1.1-inch external cover screen that can be used as a viewfinder to set up photos, or to check notifications.

Samsung said that the device will become available in the U.S. and South Korea on February for $1,380.

The Galaxy S20 series unveiled in conjunction is Samsung’s new flagship smartphone series. There are three models ranging from $1,000 to $1,600 and it’s the most expensive variant, the Galaxy S20 Ultra, that represents the biggest upgrade over last year’s S10 series thanks to its supersized screen and complex rear camera system.

The Galaxy S20 Ultra has a 6.9-inch OLED display on the front and a prominent rectangle on the back that contains its rear cameras. Those cameras power a “Space Zoom” feature that Samsung claims can magnify scenes by 100 times, a massive jump over the two-times zoom offered by the Galaxy S10. There’s also a deep learning  capability called Single Take that lets the user record a video of a scene for a few seconds and in the process takes pictures using different photography modes, which enables consumers to choose the photo most to their liking.

The S20 Ultra’s rear camera array consists of a 108-megapixel wide lens, a 12-megapixel ultrawide camera and a 48-megapixel telescopic lens. A 40-megapixel front-facing selfie camera above the display rounds out the list.

“Samsung has always leaned into ‘bigger and better’ and I believe the Galaxy S20 5G represents this, in particular, the ‘Ultra’ version,” Moorhead said. “In terms of flagships, the Ultra piles on with the best camera with 100X Space Zoom, 10X hybrid optical zoom, 108MP still resolution, 8K video resolution and “ganging” pixels to improve clarity and improve light.”

The two variants are also smaller than the Ultra, coming in at 6.2-inches and 6.7-inches. Other than that, however, the core specifications are nearly identical. All three phones support 5G, their screens run at a 120Hz resolution and the display is driven by a Snapdragon 865 processor paired with 12 gigabytes of memory and 128 gigabytes of storage space.

Samsung will start shipping the S20 to consumers on March 6 and preorders are set to open on Feb. 21.

“I believe the S20 will create a new ‘super-cycle’ for Samsung and sell better than the last three Galaxy models,” Moorhead said.