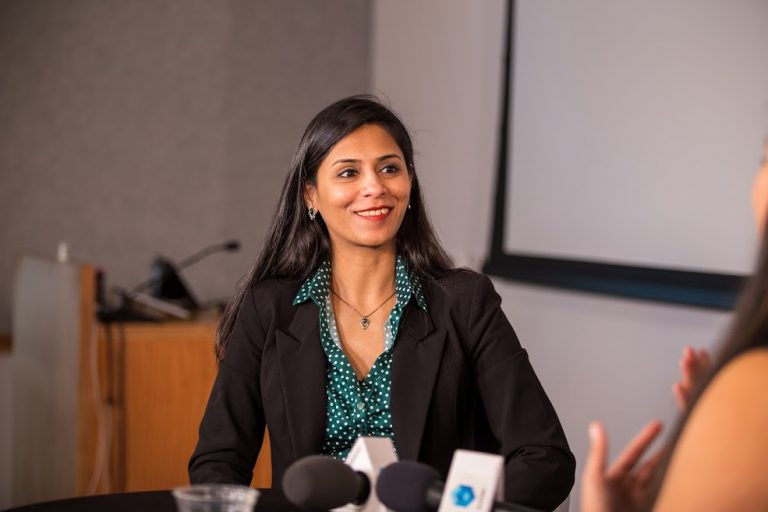 Before running cloud operations for major technology companies such as Dell Technologies Inc., RMS Computer Corp., and Qualys Inc., Syamla Bandla learned a very important skill early in her career: She learned how to move fast.

Starting with her role as a lead network engineer at Fidelity Investments in 2001, Bandla (pictured) was responsible for security, network, and monitoring infrastructure management for a business that depended on reliability and speed. With the reform of the U.S. stock market in 2005, high frequency trading began to dominate exchanges.

Today’s trades are now executed in microseconds, 100,000 times faster than the blink of the human eye.

“It was a very important team I was working on, which was responsible for mission-critical applications in a trading floor,” Bandla recalled. “Think about the sense of urgency — that’s what I learned very early on in my career.”

Bandla, now the director of production engineering at Facebook Inc., spoke with Sonia Tagare, host of theCUBE, SiliconANGLE Media’s mobile livestreaming studio, during the CloudNOW Awards event in Menlo Park, California. They discussed the evolution of Bandla’s technology career, opportunities for women in the tech world, and CloudNOW’s role in encouraging students to pursue engineering-related studies.

This week, theCUBE features Syamla Bandla as its Guest of the Week.

While Bandla was managing critical applications for Fidelity’s trading operation, she was also completing a degree in information technology at Harvard University. The experience taught her the need to overcome difficulties and stay focused on the goal, qualities which she would later use in her corporate career.

“That time was very crucial in my growth because it taught me resilience, doing two things at the same time,” Bandla said.

Bandla found herself moving into increasingly significant roles as head of cloud engineering and operations for Dell, vice president of global cloud platform services for RMS, and a similar senior-level position for Qualys. Then Facebook came calling in 2018 with an opportunity to use her cloud operations expertise and support the social media giant’s monitoring operation.

Early in her career, Bandla had to make a decision around remaining in an individual contributor role or stepping into management responsibility. She chose to become a manager when she joined Dell, and this has allowed her to not only broaden her own skills, but to encourage women to follow a similar path.

“I took on the management role, and there was no turning back,” Bandla explained. “I was giving back to the company and to the team. I was also seeing more women on my team, and that was something I was truly enjoying.”

Participation of women in the corporate world in general and the tech field in particular has been fraught with challenges. Women comprise nearly half the labor force and earn more degrees than men. Yet, they only hold 21% of board seats among Standard & Poor’s 500 companies, account for 11 % of top earners and 5% of chief executive officer positions.

The numbers are equally troubling in the technology field. Women hold only 25% of all jobs in the tech industry, 16% of senior-level positions and 10% of executive level roles.

“We have a lot of work still to do,” Bandla said. “I know that the numbers are changing, even in other companies, but they’re not changing at the rate we want. If we can influence and change the equation where we are making it a fair ground, we can see more women in tech.”

The Cloud Network of Women, or CloudNOW, is seeking to change the current picture by providing a forum for networking, knowledge sharing, mentoring, and growth. In addition to recognizing top women leaders in cloud and emerging technologies, the organization also provides science, technology, engineering and math, or STEM scholarships, to students through sponsorship by Facebook, Google LLC and Intel Corp.

“When I look at some of the fascinating stories of the scholars, some of them came from absolute poverty, even homelessness,” Bandla said. “The whole philanthropic mission of CloudNOW is based on this international STEM scholarship. It is making sure these underprivileged scholars have a fair chance.”

Getting a fair chance in the STEM field is important because there is a disturbing trendline that shows women may be actually losing ground in this area. Although the number of women in STEM has increased in a three-year period from 2015, more rapid growth of men graduating in these subject areas has resulted in a slight reduction for the overall percentage of female participation. This, combined with a high attrition rate, offers a glimpse into the challenging path ahead.

For its part, Facebook has been transparent about the participation of women and minorities in its own workforce. The company’s 2018 diversity report reflected some notable gains for women and a very modest increase in the proportion of Asian, Black and Hispanic employees.

“When I joined the production engineering monetization team last year, we had 13 women,” Bandla said. “We have 26 women in the team now. I had no women managers on the team, and I can proudly say I now have two.”

Bandla’s prominent position at Facebook offers a model for those with similar aspirations. She learned about the value of speed and resiliency early in her career, pursued her passion for technology and grabbed the brass ring of leadership when the opportunity came along.

What has shaped her also drives her commitment to help others in making the tech community a more diverse place. And it starts with her own operation, one hire at a time.

“We have a privilege, and at the same time we have a huge responsibility,” Bandla said. “My hope is, for the organization I am in, if we can see more women in production engineering, then I would say that yes, it’s getting there.”

Here’s the complete video interview, part of SiliconANGLE’s and theCUBE’s coverage of the CloudNOW Awards: