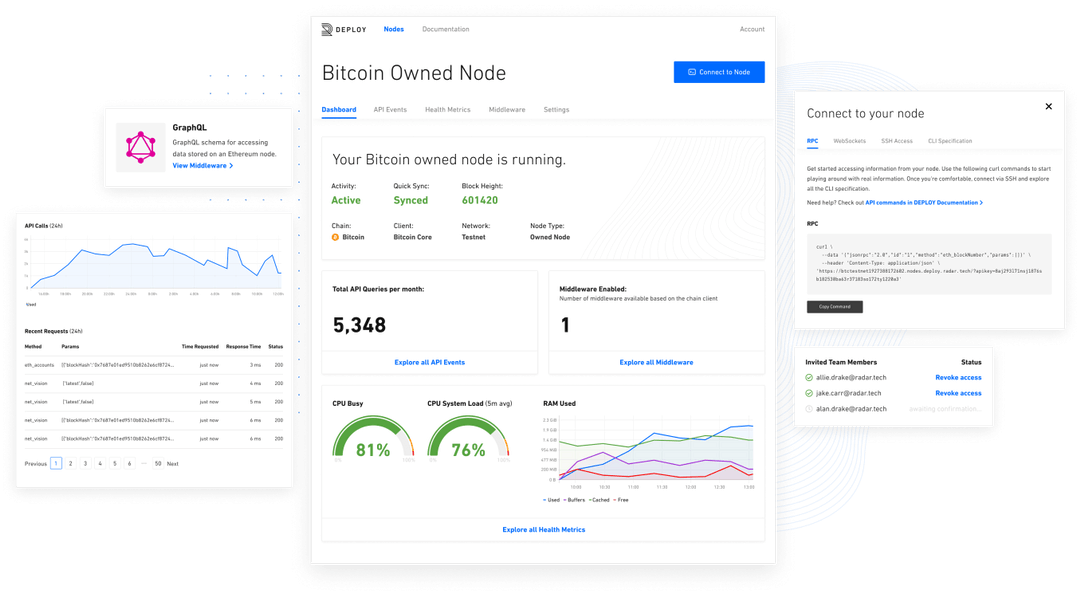 Radar Relay Inc., a distributed-ledger blockchain technology startup aimed at reshaping the financial industry, today announced the public launch of a platform designed to permit the rapid prototyping and launch of blockchain nodes on the bitcoin and Ethereum networks.

Early access to the platform, called Deploy, began in November with the initial release of the platform opening to developers to begin using it to design distributed apps, called dapps.

The platform includes developer tools that make it easy to spin up customized blockchain nodes. Then they can link in consumer products such as wallets and exchanges, enterprise tools around compliance and middleware, and financial services such as decentralized finance, hedge funds and securities markets.

A blockchain node is software that’s used to store a working copy of the distributed ledger that keeps the network secure. Blockchain networks operate by widely distributing the same ledger, which is created by chaining together blocks of transactions secured with cryptographic hashes.

The capability of deploying and managing a blockchain node keeps the most important information about the blockchain local to a service. That allows the service to get data from the blockchain faster for development, analytics and deployment of features for a dapp.

Deploy is part of what Radar calls “NodeOps,” a transformative type of service designed to be part of the blockchain ecosystem to make building, orchestrating and deploying blockchain distributed applications that are fast, reliable and scalable.

Radar created Deploy after discovering that blockchain developers are being challenged to build and deploy apps and features as quickly as they’d like. But the ecosystem is filled with different approaches that require highly technical expertise in blockchain networks.

With Deploy, developers can customize node setup, currently for bitcoin or Ethereum, with access to numerous different blockchain clients. Once deployed, the blockchain node manages itself and automates many of the more technical aspects of running one.

“We understand the challenges of building on the blockchain using third-party infrastructure solutions,” Curtis said. “To focus on growing Relay, a wallet-to-wallet token trading platform built on the Ethereum blockchain, into a global application with customers in 150 countries and hundreds of millions of dollars in tokens traded, we relied on existing infrastructure services and quickly realized they weren’t suitable for building on. They were too unreliable, centralized and restrictive.”

The challenge of running its wallet-to-wallet service, Relay, led Radar to determine that it needed its own node deployment solution to allow for deep customization. This gave rise to Deploy, which has already been used in NodeOps development by early-access customers.

“Ensuring consistent access to multiple Ethereum networks for development and production has been an important and daunting task for us,” said Henry Harder, chief technology officer of Paradigm Labs, a decentralized finance service company. “Deploy provides, by far, the best and most customizable experience for us to manage Ethereum infrastructure without having to worry about network configuration, software updates, or other DevOps concerns, allowing us to focus on building and shipping our software systems.”

Deploy is now generally available for a per-query cost for shared nodes, $750 per month for a fully owned node and enterprise pricing on request.