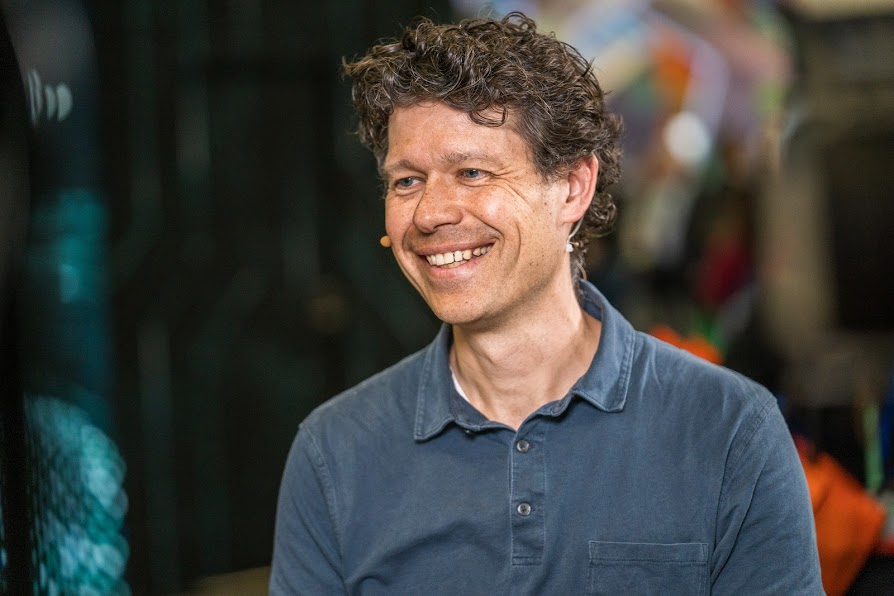 With Intel’s growing data center business now ranked second behind its PC chip division, the company realized $3.5 billion from AI-related products in 2019. And with the acquisition of Nervana Systems, a young company noted for silicon architecture that can leverage data sets at lightning fast speed, and Movidius Ltd., which offers technology for running computer vision models inside of “internet of things” devices, Intel is clearly carving out its own niche in AI.

What will this evolving role look like for the 52-year-old semiconductor giant? While Intel is building its own AI practice, it’s also looking closely at the challenges of protecting data and, perhaps more significantly, how AI can help foster a new era of industry collaboration for a better society.

“Banks could compete on lending and their normal activities, but in terms of fraud detection they may decide to make some alliance where they cross check each other’s models on certain transactions,” said Casimir Wierzynski (pictured), senior director of AI products at Intel. “I’m not actually giving you any transaction data. This is one of the areas where Intel is really pushing.”

Wierzynski spoke with John Furrier, host of theCUBE, SiliconANGLE Media’s mobile livestreaming studio, during the RSA Conference in San Francisco. They discussed the use of technologies to maintain data privacy while training models, industry collaboration to develop new solutions, the need to include experts from many different fields, and an opportunity to improve society though greater access to vital information.

This week, theCUBE features Casimir Wierzynski as its Guest of the Week.

Wierzynski is one of the leading voices in a movement for Privacy-Preserving Machine Learning, or PPML. The goal of PPML is to combine complementary technologies so that machine learning can use data for training models without sacrificing the anonymity of personal information inside the data set.

“We’ve been looking at this collision course over the last couple years around the need for data to train machine-learning systems to unlock all the power of AI but still keep data private,” Wierzynski said. “You’ll have one party that owns data, another party may own a model, and they’re running a system on somebody’s hardware.”

One of the privacy-preserving techniques being examined by Wierzynski and his team at Intel is the use of homomorphic encryption, or HE. It’s a public/private key cryptography system designed to let applications perform training on encrypted information without exposing the data itself.

Security can break down when data needs to be decrypted in order to be used. HE allows data to remain encrypted while it is being processed for training models.

Google and Microsoft get involved

The potential for applying HE to preserve privacy and still feed the AI engine has been so appealing that it has brought representatives from Intel, Google LLC and Microsoft Corp. together over the past couple of years to discuss standards for implementation. Microsoft has even released an open-source homomorphic encryption library for use by developers.

“This is one of the most leading-edge techniques in this area,” Wierzynski said. “There are ways of doing math on the data while it stays encrypted and the answer that comes out is still encrypted. It’s only the actual owner of the data who can reveal the answer.”

Intel has developed its own open-source tool for the technology called HE Transformer. Released in December 2018, the tool provides a homomorphic encryption backend to Intel’s neural network compiler called nGraph.

There are also growing signs that the HE bandwagon is beginning to gather momentum as new firms enter the market. In February, a homomorphic encryption company — Enveil — which was founded by a former National Security Agency senior researcher, announced series A funding of $10 million. Another HE startup, Duality Inc., announced its round of funding in December, led by Intel Capital.

“I’m very excited about taking some of these things like homomorphic encryption and making them more available to developers and data scientists,” Wierzynski said. “It’s asking too much for a data scientist to also be a post-quantum crypto expert.”

Indeed, the Intel senior director has been actively pursuing a “big tent” approach for HE, mindful that the more data that can be safely shared, the better artificial intelligence and machine learning will become.

An example of this can be found in healthcare. There are currently strict laws governing the use of patient data as it is carefully guarded by hospitals and health organizations around the world. If this information could be pooled and widely shared, the reasoning goes that AI improvement would result in better diagnosis outcomes for the patient.

“If you can expand the availability of data, that’s always going to help machine-learning systems, so we’re trying to unlock data silos that may exist across countries and organizations,” Wierzynski said. “There are these interesting ideas like federated learning where you could somehow decentralize the machine-learning process so you can still respect privacy but get the statistical power.”

The big tent also includes many different constituencies. The machine-learning field is by nature a collaborative one, according to Wierzynski, which accounts for why major tech powers like Google and Microsoft are taking an open mind on how to share resources and make data sharing happen.

“Every company is going to have its secret sauce, the things it wants to keep proprietary, but it’s very important for companies to engage this broader community of researchers,” Wierzynski said. “You’re going to need policy experts and applied mathematicians and linguists and neuroscientists.”

Homomorphic encryption is a compute intensive exercise, an area of specialty for Intel over the last half century. The company is staking its claim to the data space by offering a solution which, if widely adopted, could have a profound impact on key economic sectors of the world such as healthcare, finance and retail.

Wierzynski and Intel are making the point that AI computation of encrypted data doesn’t have to be a zero-sum game. Privacy can be protected and models can be built using a new approach that will likely only get better over time.

“This is a set of techniques that help people realize the promise of AI and machine learning,” Wierzynski said. “Part of what we’re trying to do at the technical level is give society and regulators a more flexible set of tools around which you can slice and dice data and privacy so it’s not just all or none.”

Here’s the complete video interview, part of SiliconANGLE’s and theCUBE’s coverage of the RSA Conference: