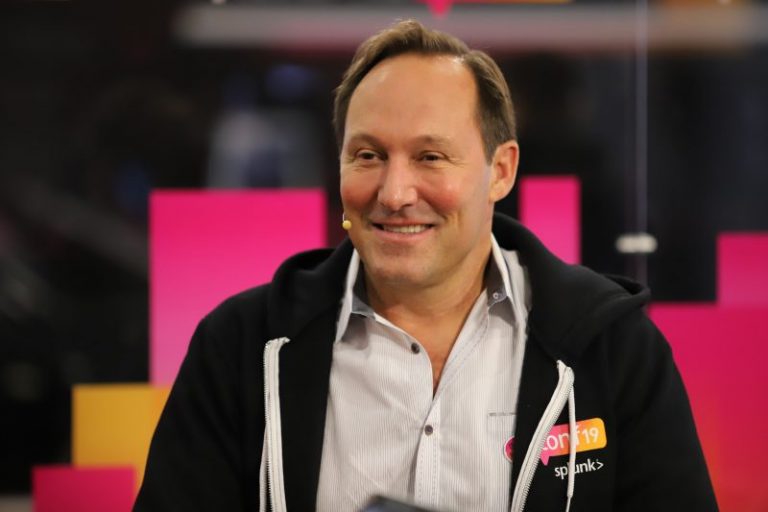 Still, there were some encouraging signs for the company, as its ongoing shift to a software-as-a-service model appears to be accelerating. The company said cloud drove nearly half of its software bookings during the quarter.

“Our shift to a SaaS model is accelerating with cloud driving nearly half of total software bookings in the quarter with ARR growing 52% year over year,” said Splunk Chief Financial Officer Jason Child. “We are also thrilled to have been recently added to the Fortune 1000, which is monumental recognition for a software company and a testament to the importance of data in today’s world.”

Splunk Chief Executive Doug Merritt (pictured) said the company appears to be benefiting from the COVID-19 pandemic, as organizations are rapidly accelerating their digital transformations in order to keep moving forward.

“As customers continue to adapt to this new normal, data matters more than ever, evidenced by our continued strong momentum this quarter,” Merritt said.

That momentum seems to have pleased Splunk’s investors too, as the company’s shares rose 3% in after-hours trading. Update: Shares shot up nearly 13% on Friday.

Analyst Charles King of Pund-IT Inc. told SiliconANGLE that Splunk’s situation is quite interesting, because as a software company, it hasn’t really suffered from the pullback in sales and supply chain disturbances that have afflicted most hardware suppliers.

“Its primary value proposition, maximizing the performance and security of IT assets, is highly attractive to companies trying to make the most of their existing computing infrastructures,” King said. “And its move to software-as-a-service is likely to continue being a bright point.”

But Holger Mueller, an analyst with Constellation Research Inc., said he was a bit concerned that Splunk had already previously revised its forecast for the quarter, yet still failed to meet those new targets.

“With the Covid-19 pandemic accelerating digital transformation world wide, Splunk should be a winner in the transformation, as it gives enterprises visibility into their data,” Mueller said. “The next quarter will be key for Splunk, while management must address the root causes of its current volatility.”

That could be tricky, though, as Splunk’s guidance for the second quarter was a little light, with executives saying they expect revenue of about $520 million. Wall Street had earlier forecast second-quarter revenue of $550 million.

The company also struck an important deal that will see its Splunk Cloud platform available on Google Cloud Platform. The service is now available on Google’s cloud in beta test mode, ahead of general availability expected later this year.