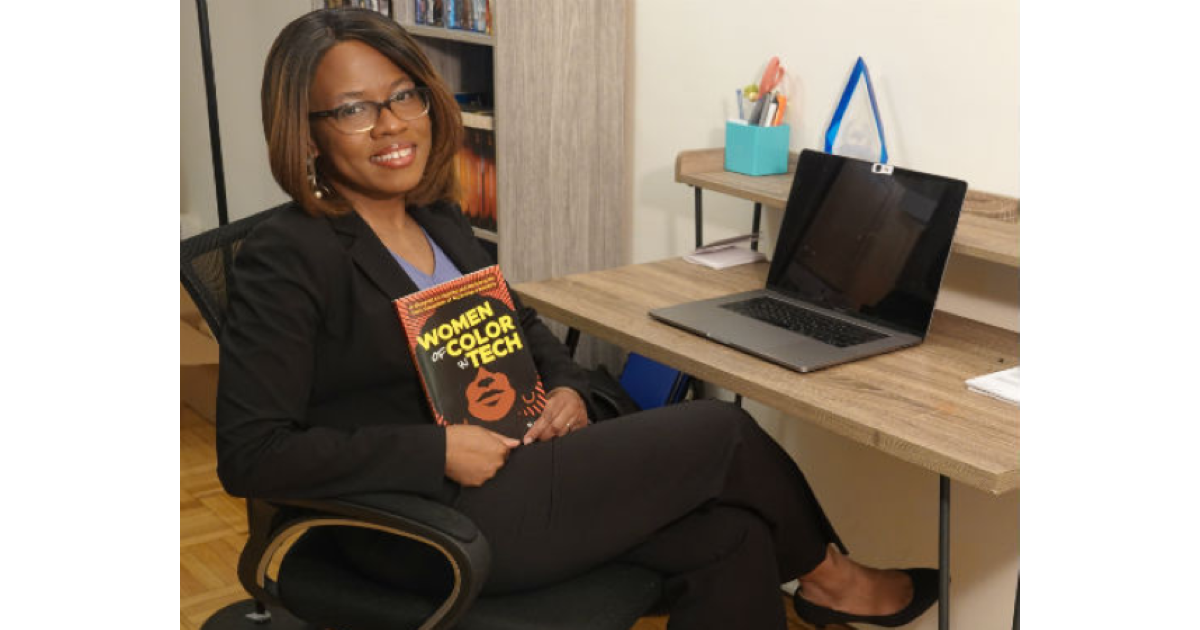 Tech has a horrible track record for diversity. Even a cursory glance at the statistics shows that minority numbers are low and retention even worse.

The bottom line is that technology is shaping the world, with digital interactions occurring at home, work and play — and a predominantly male, white and Asian workforce has challenges creating unbiased technologies for the multicultural, multiracial, multigender world.

STEM and STEAM initiatives in high schools and colleges are encouraging minorities to pursue a career in tech. But educational institutes in areas with diverse populations are often challenged for funding, creating “STEM deserts.” Businesses create diversity hiring initiatives, but retention rates are low.

Women of color face gender stereotyping, teacher and manager bias and societal norms that say, “You can’t do this,” and a lack of minority female role models or mentors. These barriers add up, and many choose to take another career path.

“Don’t shortchange yourself,” said Susanne Tedrick (pictured), cloud technology specialist at IBM and author of  “Women of Color in Tech: A Blueprint for Inspiring and Mentoring the Next Generation of Technology Innovators.” She spoke to theCUBE about how black women can overcome the subtle biases that stop them from entering the tech workforce and counteract the racist behaviors that occur when they are there.

This week theCUBE spotlights Susanne Tedrick in its Women in Tech feature.

Don’t accept the feelings of inadequacy, but do acknowledge and examine them, Tedrick advised. “It is OK to have those feelings,” she said. “It’s just more a matter of not giving the feelings credence. It’s really picking apart that negativity and addressing the parts that you can and then throwing away the ones that have absolutely no meaning or value.”

One of many women of color who dismissed technology as an unattainable career, Tedrick took a job in the finance sector. She was successful but unfulfilled. Unable to just quit because of financial responsibilities, she made the decision to attend night classes. It wasn’t the easiest route, but Tedrick persevered. She now has an undergraduate degree from Northwestern University and is currently working on a master’s degree in information technology at Virginia Tech.

Returning to school to get a higher education was Tedrick’s choice, because she knew she needed the formal structure of classes. But there are many other ways to gain experience and build skills that don’t require the time and financial investment of a degree.

“When you think about all of the different learning opportunities that are available, like hackathons and bootcamps and podcasts and all other ways of self-learning, you can build your skills up pretty quickly at almost no cost,” Tedrick said.

If she’d had more positive role models and support to build her self-confidence, Tedrick believes she would have chosen a career in tech from the start. “Finding my voice a lot earlier, I think that would be the ‘thing’ that I would have tried to do over from the start,” she said.

Instead, she internalized the dialogue of “Oh, I can’t be successful” or “This is for somebody else” and ignored her talent and passion for years. 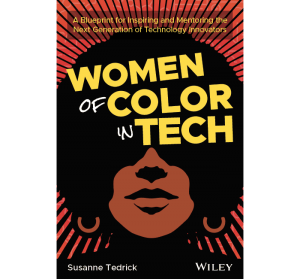 While Tedrick’s story has a happy ending, the industry is losing out on women who didn’t have her strength to find a way without any guidance or support. After struggling to establish herself in her career as a cloud technology specialist, Tedrick became a mentor and activist to help other women of color have an easier path.

In her book: “Women of Color in Tech: A Blueprint for Inspiring and Mentoring the Next Generation of Technology Innovators,” Tedrick shares her struggles and offers a practical manual for anyone who wants a career in technology. Her goal is to help others avoid her mistakes.

“How can I help you from my experience so you too can be happy and successful, sparing hours and hours of banging your head against the wall?” she asked.

There are many books that offer motivational career advice to women, but Tedrick’s book stands out as a true “how-to” manual filled with resources, links, and steps to take toward a successful career in tech.

“I’m a very action- and result-oriented person,” she said. “If I’m asking you to spend money on my book, I’m hoping that it’s more than just to get you to feel good.” Instead, she wants readers to say: “I can actually do this.”

Understand the options available in tech

The best advice to those who aren’t sure if they are “good enough” for a career in tech is to research the wide variety of career options within the field, according to Tedrick. More opportunities exist than those requiring math and engineering skills.

“I think a lot of people don’t understand what tech is,” Tedrick said. “A good starting point is just getting a lay of the land of what is considered technology and all of the different careers that exist, as well as the different industry touchpoints.”

CompTIA is the number-one site Tedrick recommends for research, building community, and training. The site offers communities dedicated to advancing women and diversity in tech and offers “very comprehensive and robust” resources, according to Tedrick. 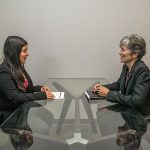 Informational interviews are another way Tedrick recommends women investigate which tech positions would best suit their talents. These interviews aren’t about being hired, but are conversational meetings to learn about career options and real-life experiences from those already in the field. “What are the pros and cons of working in this position?” and “What skills and talents do I need?” are two questions Tedrick recommends asking.

“Reaching out to CompTIA and having informational interviews don’t require a lot of money,” she said. “It’s just dedicating the time and being curious.”

Negotiate for a better deal

“Scared as hell” is how Tedrick described feeling the first time she asked a hiring manager for a higher salary offer. “When it came time to do it, it was like all of a sudden my tongue went numb,” she said. Although her first negotiation didn’t net her a higher pay rate, she did get a flexible schedule and time off to pursue professional development.

“We reached an agreement that was going to be suitable for the both of us and that we were both happy with, which is ultimately what you want out of these particular situations,” she said.

Women need to research what equivalent positions pay and know their value, according to Tedrick. It’s also important to understand that negotiation isn’t an inherited trait, but a skill that needs to be learned. “Even if it doesn’t go well the first time, it’s OK. The important thing is to keep doing it,” she said. And when it does go well, “you feel that you’re being valued and that it’s going to make you happy.”

Understand unconscious bias in the workplace

The struggle doesn’t end once women, and especially women of color, enter the technology workplace. While diversity initiatives encourage hiring minorities, “the focus is on the metric,” Tedrick stated. “They’re not really having the longer  and harder conversation of ‘OK, now that we have these people, what are we really doing to make them feel that they belong?’” 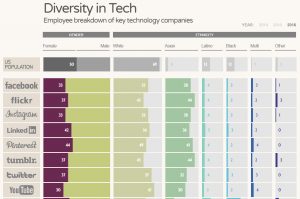 Figures show an average of 5% black employees across 30 of the largest tech companies, while whites and Asians made up 83% of the workforce. This is only a 1% gain over 2014 figures, meaning diversity initiatives are failing.

“It isn’t that people of color don’t want to work in these companies,” she said. “It’s just that when they get there, there are microaggressions; there’s a glass ceiling. There are all of these very direct and indirect ways that they just feel like an ‘other’ and not someone that’s actually a part of the team.”

The only way around this is for companies to have that “difficult conversation” of talking to employees of color and getting candid feedback on the culture in the workplace, according to Tedrick. “And sometimes it will not be good,” she said.

There’s no manual for how to be black in America

The current Black Lives Matter protests have increased microaggressions in the workplace, according to Tedrick. While she stressed that the majority of her co-workers are supportive, a small number don’t understand the cultural significance of the movement — or how their statements and actions can be inappropriate and insensitive.

“This was the roughest and most challenging week I’ve had personally and professionally since 2020 started,” Tedrick wrote on her LinkedIn feed. She gives an example of just one situation when a colleague commented that “All lives matter.”

“When you say that, I don’t think you realize that that in itself is a microaggression for the black person,” Tedrick stated.

She explained that black people are forced to choose between investing time in having an awkward conversation educating the unaware commenter why their words hurt, or not speaking out and keeping the “feeling of otherness and alienation in [their] heart,” Tedrick said. “There is no manual.”

The black community is as unsure of how to best handle the conversation as the white community, according to Tedrick. “What’s happening is very difficult for many of us,” she said. “On the one hand, we’re all glad that this is finally reaching a critical moment of history where it looks like there will be change. But you know, there’s still resistance.”

Regardless of skin color or ethnicity, “everyone is different,” Tedrick said.

Whites who want to support their minority colleagues need to stop defining by group. “I tell people how you can best help is to always treat people as individuals,” she said. “Realizing that the person you are speaking to happens to be black but not everyone who is black has the same experiences and outlook on life.”

Becoming a true ally is more than a hashtag, social media post, or having a black friend. It’s “a lifetime dedication to helping those in marginalized communities — promoting them, advocating them, supporting them, or just generally speaking out on the terrible things that you see,” according to Tedrick.

Changing the workplace culture and becoming a minority ally “means sometimes putting yourself in an uncomfortable position of hearing certain things that might make you feel uneasy,” Tedrick said. “But that’s the only way that you learn and you grow.”

TheCUBE’s Women in Tech interview archives can be viewed here, including discussions on diversity and inclusion in the workplace with Dr. Tiffany Jana, Lillian Carrasquillo and Nataly Kogan.