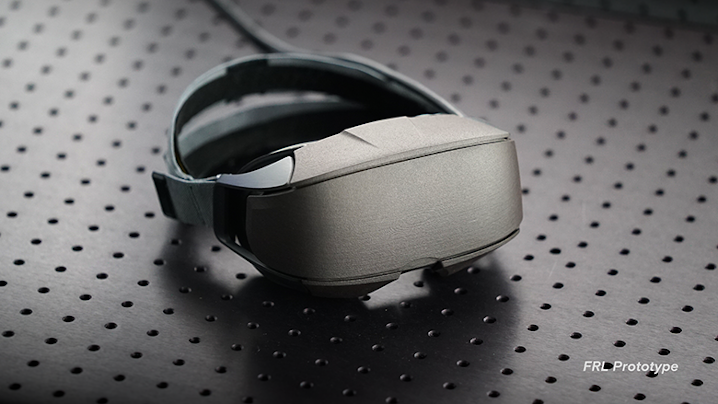 Researchers at Facebook Inc. today detailed a holographic optics technology that could enable the development of smaller, more powerful virtual reality headsets not much bigger than a pair of glasses.

VR headsets, such as Facebook’s popular Oculus Quest, are generally quite large. A sizable portion of their volume is taken up by the lens system that displays VR content in front of the user’s eyes. Shrinking this system can help increase the overall size of the headset and make it more comfortable to wear.

Facebook has built three experimental VR glasses that don’t rely on traditional lenses, which are made from a curved piece of glass or plastic, but instead use a thin holographic film in their place. A laser shines light on the film to produce images. One of the prototype glasses (pictured) Facebook creates with the technology weighs under an ounce, compared with the Oculus Quest’s 20.1-ounce chassis.

“We anticipate that such lightweight and comfortable form factors may enable extended VR sessions and new use cases, including productivity,” Facebook’s researchers wrote.

The prototype glasses display content at a resolution of 1600 pixels by 900 pixels, which is similar to what current VR devices provide. Moreover, Facebook believes the technology could eventually exceed the graphic fidelity offered by today’s headsets. That’s because the holographic lens uses a laser light source to generate images, and a laser-based source can cover a bigger part of the color spectrum visible to the human eye than traditional LED-based parts.

There’s still much work to be done before the technology is ready for commercialization. The small size of Facebook’s sub-ounce prototype partially stems from the fact that, in contrast with the Oculus Quest, its processor and battery are external rather than internal. This means any mass-market headset based on the technology will likely be larger than the  prototype.

But even when factoring in the weight of extra components, the social network’s researchers believe their approach could enable VR devices with a “sunglasses-like” form factor.

“Our experimental results have demonstrated the possibility of wide FOV [field of view], high resolution virtual reality displays in the form factor of large sunglasses,” the researchers wrote in an academic paper. “We have also demonstrated the viability of full color holographic optics and the ability to scale our designs to the visual acuity limits of normal human vision.”

Facebook has identified several ways it could potentially bring technology closer to commercial viability. The proposals include designing custom optical components to replace the off-the-shelf parts in the prototype, which would help improve efficiency. The researchers also brought up the possibility of replacing prototype glasses’ aluminum frame with one made of plastic to reduce its weight even further.