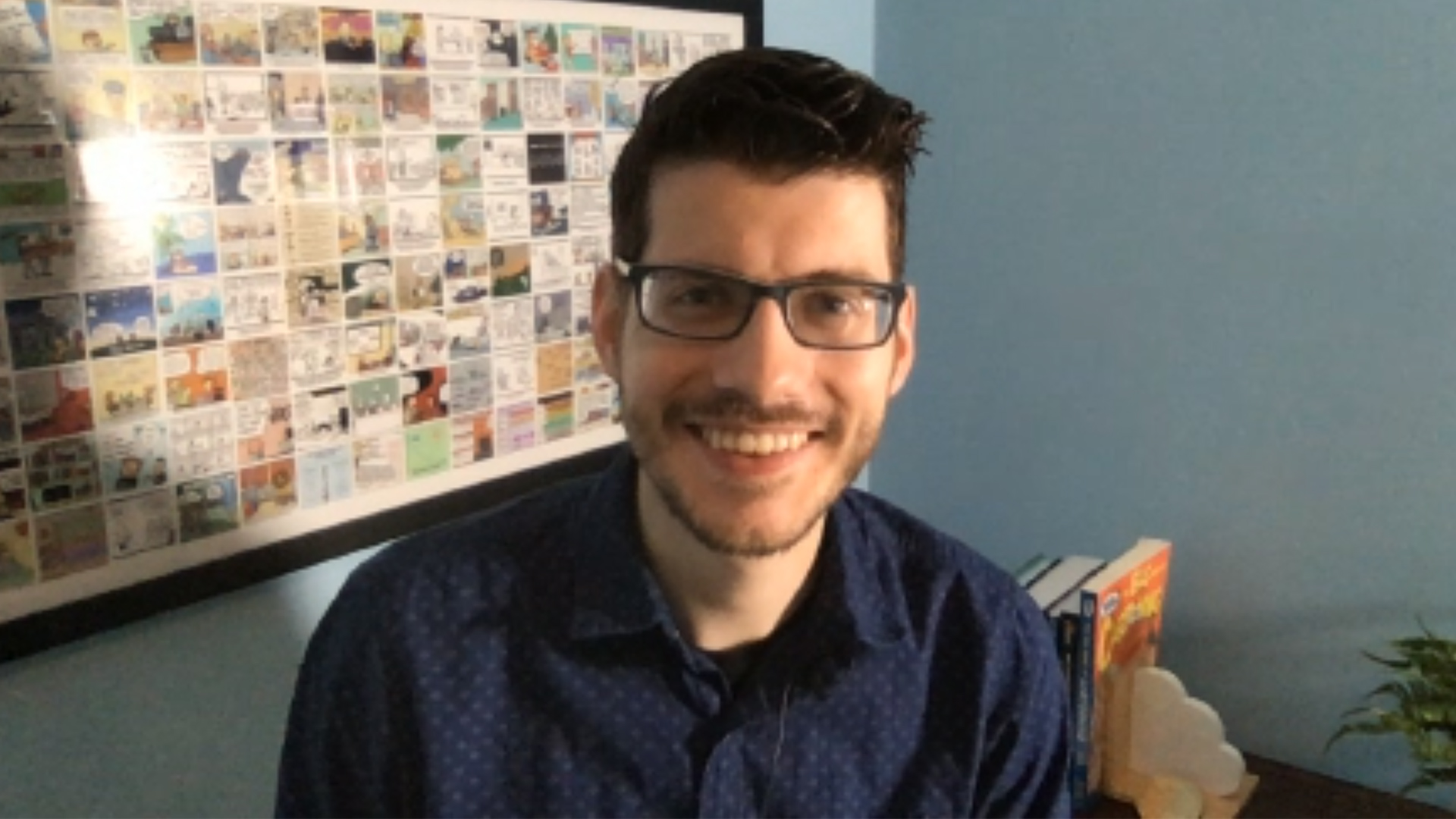 There is a right way and a wrong way to run a business in the cloud. Forrest Brazeal (pictured) has songs, cartoons and even a soon-to-be-released book on the subject to prove it.

Brazeal, the “cloud bard” for training company A Cloud Guru, spent years working with enterprises on cloud adoption and is an advocate and contributor as a “Hero” in the Amazon Web Services Inc. serverless community.

That’s his day job. The rest of his time is occupied finding novel and innovative ways to deliver an important message: Cloud native technology may be abstract, but it doesn’t have to be difficult.

“I’m passionate about helping people figure out how to take that next step, not to be stuck or get into a state where they are, but to get up the serverless ladder, to that next stage of cloud native adoption,” Brazeal said. “Everybody has an intuitive understanding of why a doctor exists or why a lawyer exists. It’s a little bit harder to get your head around: Why does a cloud architect exist, what do they build?”

Brazeal spoke with Stu Miniman, host of theCUBE, SiliconANGLE Media’s livestreaming studio, in a new episode of Cloud Native Insights, a series which focuses on transitions in the marketplace and how companies are making the journey to modernize and leverage cloud native technologies. They discussed the perils of implementing a centralized approach to cloud adoption, why lift and shift often fails, career opportunities for those seeking to broaden their tech skills and reflections on an emerging cloud native world.

One of the first mistakes that Brazeal often sees organizations make is to designate an “elite strike force” of engineers to drive cloud adoption. This becomes an “ivory tower” of cloud excellence whose job becomes defining the standards and processes to move the rest of the organization into the cloud.

The problem is that the role of a cloud center of excellence becomes one of continually explaining the technology to those who don’t understand it, a process identified by Brazeal as one of cloud translation.

“You’re constantly having to explain everything, you’re going back and forth and that leads to less sophisticated architectures, poorer outcomes and it takes you much longer to get where you want to go,” Brazeal said. “The central team doesn’t scale, they’re going to burn out.”

By spreading the knowledge, a process known as developing “cloud fluency,” businesses can integrate the technology within the fabric of the enterprise itself.

“You want your entire organization as much as possible to speak the language of cloud at some baseline level,” Brazeal said. “It’s also taking those central cloud experts that were previously in their ivory tower doing their own thing and embed them as much as you can in a roving fashion with these legacy product teams and help them improve.” 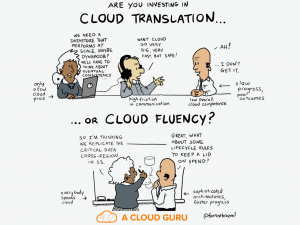 Another common error which Brazeal has observed over years of working with enterprises in cloud transformation is a misguided view of migrating applications and workloads running in an on-premises data center and moving them wholesale to the cloud, a process known as “lift and shift.”

The problem is that lift and shift actually starts a “shot clock,” a limited amount of time for the migrating organization to adopt new levels of innovation and different tools to take advantage of what is now running in the cloud.

“The key thing is lift and shift is a phase,” Brazeal explained. “You’ve got to get through it and keep innovating and a lot of people don’t realize that. They think they can go to the cloud with their servers, run them pretty much as they did in the data center, stop there and get long-term benefits from cloud. That clock is ticking because your initial benefits are very front-loaded.”

This mistake is illustrated by Brazeal as a classic diagram of diminishing return. As value drops over time, the dangers of lift and shift rise accordingly. 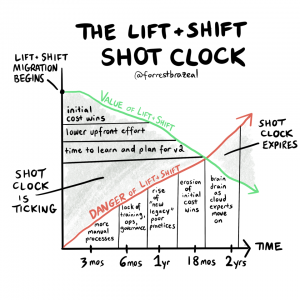 “You get brain drain and now you’ve created this new legacy swamp of poor procedures and practices,” Brazeal said. “At that point, the negative side effects of lift and shift have overwhelmed the benefits you thought you were going to get. That’s when your lift and shift shot clock has expired and that’s what you want to avoid by continuing to innovate and continuing to refactor towards a true cloud native deployment.”

Establishing successful models in cloud native also involves leveraging technologies such as serverless computing. An example of this can be found in fledgling companies, such as Netlify Inc., which build new services for web development and free up developers to focus on mission-critical projects.

“The bar to entry is so low because you are cutting out a lot of things that were seen as gatekeeping mechanisms in the past,” Brazeal said. “If you haven’t learned this underlying protocol then you don’t qualify as a real developer. Serverless turns that on its head and says: ‘No, I’m providing you with abstractions you’ll be able to build on top and you’re going to be able to focus so much more of your energy on things that actually provide value for the business.’”

Part of the lower bar to entry is that in serverless and other cloud native communities there are multiple entry points for people looking to use new skills. What makes the opportunity even more attractive is that getting into the cloud native field offers an entry point to work on technologies that are new as well. It’s hard to demand five years of experience for a tech position if a particular tool has been in existence for only 18 months.

In April, Brazeal launched the Cloud Resume Challenge as a way to encourage people with minimal prior cloud experience to send in their resumes and potentially find a new career in tech.

The “challenge” has a few benchmarks that must be met. Job applicants must at least have an AWS Cloud Practitioner certification, the resume must be written in HTML and it should be deployed online as an Amazon S3 static website.

“The project doesn’t tell you exactly how to do it,” Brazeal said. “You wind up with some pain, there’s some failure involved there, and that’s what makes this learning stick. We’ve got many people working on this in every continent now, we’ve had many people who have completed it, we’ve seen people get interviewed and get hired coming out of a totally nontech background.”

Brazeal recently completed a new book, “The Read Aloud Cloud: An Innocent’s Guide to the Tech Inside,” that’s scheduled for release in September. The cloud bard’s body of work captures the cloud in cartoons, narrative from his personal experiences, and even verse:

Your hotel key, your boarding pass,
The card you swipe to pay for gas,
The smart TV atop the bar,
The entertainment in your car,
Your doorbell, toothbrush, thermostat,
The vacuum that attacked your cat,
They all connect the cloud and you.
Maybe they shouldn’t, but they do.