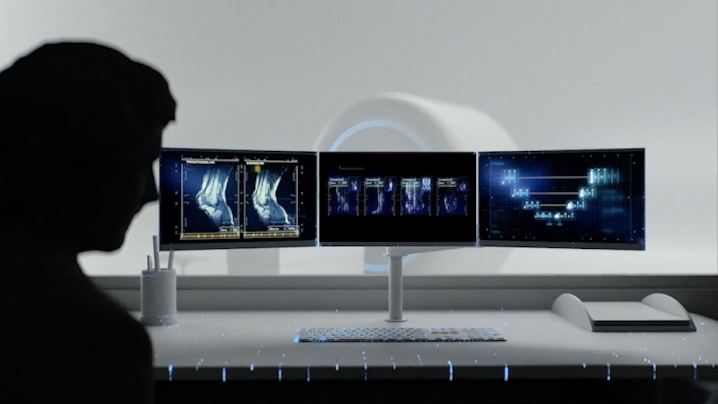 Facebook Inc.’s research division today said that it has developed an artificial intelligence model that allows MRI scans to be taken up to four times faster without compromising on resolution.

The model, aptly called fastMRI, is the fruit of a partnership between Facebook and the NYU Langone Medical Center. The images it produces were found to be “diagnostically interchangeable” with regular MRI scans in a clinical study, according to the social network.

MRI scanners create images by generating magnetic fields that cause hydrogen atoms in the body tissue to emit electromagnetic signals. These signals each show up as pixels in the scan. The result is a high-resolution view of organs and soft tissue, but there’s a drawback: The process of creating such high-resolution images is time-consuming, requiring patients to spend up to an hour inside an MRI scanner.

That’s the challenge Facebook’s fastMRI model is aimed at addressing. By cutting scan durations, the company hopes to reduce not only the amount of time patients spend inside the scanner but also the amount of time they have to wait for an appointment. The more scans a hospital can perform, the more patients it can serve in a given day.

Facebook developed fastMRI using a dataset of about 1,200 anonymized knee scans provided by NYU Langone. To train fastMRI, the company’s researchers created a lower-resolution version of each scan with only a quarter of the original image data and had the model reconstruct the scan. The AI then compared its reconstructed images with the original full-resolution knee scans to hone its accuracy.

Facebook’s researchers experimented with several thousand model variations before settling on the final version, according to the social network. They also gathered feedback from NYU Langone experts in the process to identify imaging issues that weren’t obvious to non-doctors. The result, Facebook claims, is a model that produces MRI scans four times faster than the traditional approach without lowering image quality.

Researchers put fastMRI’s image quality to the test by conducting a clinical study with a group of radiologists. Not only were the experts unable to distinguish the AI-augmented and regular MRI scans, Facebook said, but they also made the same diagnoses with both sets of images.

“This study is an important step toward clinical acceptance and utilization of AI-accelerated MRI scans, because it demonstrates for the first time that AI-generated images are indistinguishable in appearance from standard clinical MR exams,” said NYU Langone radiology Chair Michael Recht.

Now that fastMRI has proven effective at speeding up knee scans, Facebook plans to extend the model to other types of medical images such as brain scans. It’s also working to expand the range of MRI scanners on which the software can run. In the clinical study, the company’s researchers used high-powered “3 T” machines, but they’re working to make the software suitable for use with less expensive “1.5 T” machines.

Facebook’s ultimate goal is to have MRI manufacturers implement fastMRI on their hardware. To that end, it has open-sourced both the model  itself and the training data used in the project.