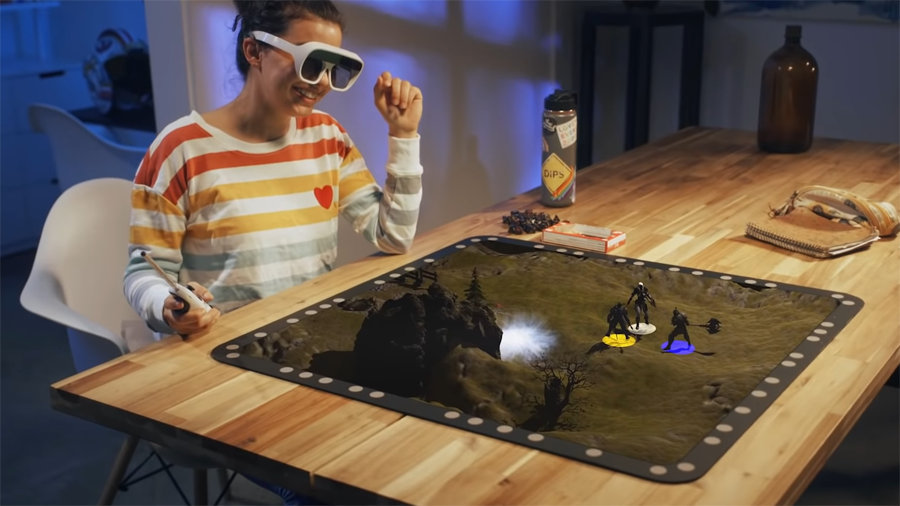 Tilt Five Inc., an augmented reality entertainment system startup that uses AR to bring a board game to life, today announced that it has raised $7.5 million in a new funding round led by SIP Global Partners.

The Series A funding follows a Kickstarter campaign that brought the company $1.7 million in October 2019, which the company claims is one of the largest ever crowdfunding campaigns ever for an AR startup. The startup intends to use the new funding to hire additional employees, build partnerships and expand available content.

“Tilt Five was founded on the idea that we can bring family and friends together to play in the real world, enhanced with the magical capabilities of immersive 3D technology,” said Tilt Five Chief Executive Jeri Ellsworth. “While the tech giants invest billions in far-off solutions, this investment expands our ability to deliver on a proven set of technologies resulting in an affordable, social and wearable device.”

Tilt Five operates as an out-of-the-box board game solution that brings groups of friends together around the living room or dining room table – but also enables remote friends to join in – using shared 3D holographic environments that are projected onto a playing space.

All players view games that spring to life in front of them, allowing them to explore, battle and solve puzzles with friends locally and remotely on their own tables.

Basically, a solo player, or two to four friends, all don AR glasses, sit around a table, and then a game emerges from the game board in the table. What at first appears to be a blank board becomes something totally different – a bustling metropolis filled with city streets, towering buildings and cars, a dungeon with dragons, monsters and treasure, a game like chess filled with pieces to move strategically to overcome opponents and dominate, or any other number of party or board games.

The gaming controller wands are capable of six-degrees-of-freedom of control when players reach into the game world and can interact with the 3D environments and characters. Embedded camera systems can track physical objects such as game pieces and hands seamlessly blend them with virtual ones, providing a highly immersive experience for both present and remote players.

Stereo speakers and microphones are also used to help provide a sense of presence for remote players for people to maintain a sense of immersion.

The use of AR glasses also means that there is a unique persistence for game presentation meaning that each player has their own private view of the game world. Thus, there is no need for split screens for hiding card decks or hands from other players, and players can still call out to each other and see the physical world around them through holographic projections.

Tilt Five intends to partner with numerous third-party developers to bring a bevy of content to its tabletop board game system. It will include games from Tabletopia, HappyGiant, Niffler, PlayStack, Beatshapers, Playito, Monocle Society, Deck13, GFX47 and Battle Map Studio.

This Series A round was led by SIP Global Partners with participation from BITKRAFT Ventures, Galaxy Interactive, Logitech and games industry innovator Ken Birdwell.

“SIP Global Partners invested in Tilt Five because we believe that, with its revolutionary approach to AR and deeply collaborative experiences,” said Jeffrey Smith, a general partner at SIP Global Partners who has joined Tilt Five as a board member. “Tilt Five is poised to be the first globally successful consumer AR game system.”

Tilt Five XE kits include a pair of AR glasses, a game board and a wand. XE Kits are currently $359 and are available to pre-order. The company also intends to provide Social Kits that will include three AR glasses, three wands and a gameboard, available later in 2021.