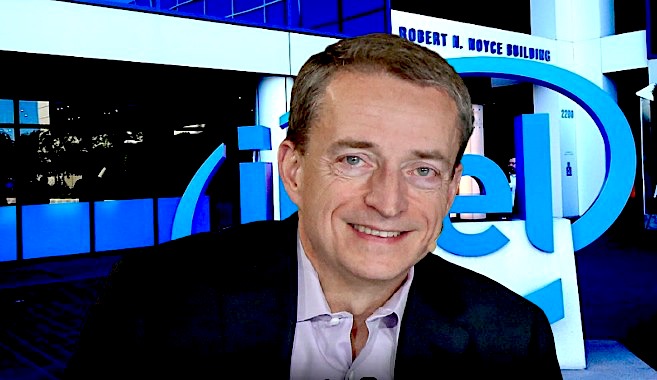 Intel Corp.’s incoming Chief Executive Pat Gelsinger told investors today that the company’s troubled seven-nanometer chip manufacturing technology is on track to start producing chips in 2023, but he said the company will likely outsource an increasing amount of its manufacturing to outside producers.

Gelsinger (pictured) made his remarks as Intel reported strong fourth-quarter financial results that blew away analysts’ forecasts in what was the last full quarter under its current CEO Bob Swan.

The numbers helped Intel post a fifth successive year of record annual revenue, with its full-year 2020 sales rising 8%, to $77.9 billion.

Even so, those forecasts were down noticeably year-over-year and Intel’s stock lost more than 4% of its value in after-hours trading.

In a conference call with analysts, Gelsinger said he was pleased with the progress made on Intel’s seven-nanometer chip process. “I am confident that the majority of our 2023 products will be manufactured internally. At the same time, given the breadth of our portfolio, it’s likely that we will expand our use of external foundries for certain technologies and products.”

Those reassurances will have been welcome news for investors, who have been worried that Intel’s seven-nanometer technology has been unable to keep pace with that of its competitors. Although Intel has historically always designed and manufactured its own computer processors, rival firms such as Advanced Micro Devices Inc. use external foundries to manufacture the bulk of their chips.

Intel’s current chip designs are still built on 14- or 10-nanometer processes, whereas some of its competitors’ products are manufactured at external factories owned by Taiwan Semiconductor Manufacturing Corp. or Samsung Electronics Ltd., which use a five-nanometer process. The smaller the process, which refers to the length of connections between transistors, the more transistors can be fitted onto a single chip, improving power and efficiency and creating a better overall product.

Concerns over Intel’s seven-nanometer struggles came to a head in December when the activist hedge fund Third Point LLC wrote a letter to the company’s board of directors, saying that its failure to keep up with competitors was a critical vulnerability. Third Point CEO Dan Loeb said in the letter that Intel had fallen behind Asian chip foundries and urged its board to make some big changes to the company, such as considering outsourcing some chip production and divest parts of its business.

Intel’s board responded by bringing in Gelsinger to replace Swan, though it insisted Third Point’s pressure was not the main impetus for the change. Gelsinger will assume the CEO role at Intel next month.

Constellation Research Inc. analyst Holger Mueller told SiliconANGLE that Gelsinger will have his work cut out once he takes over the reins from Swan.

“COVID-19 has helped PC sales but consumers and enterprises will only buy so many PCs,” Mueller pointed out. “The good news is that new seven-nanometer process is now on track, but Intel will have to show how much chips it can ship from his factories. The option of using partners is a different game that Intel is not accustomed to and comes with very different dynamics and most importantly profits.”

During the quarter just gone, Intel said strength in personal computer sales helped it surpass its own exceptions. It said Intel chips were sold in 33% more PCs during the quarter than the same period a year ago. The company has benefited from a big jump in PC sales thanks to the rise of remote work and education.

With the exception of its autonomous vehicle chip business Mobileye, Intel’s other businesses all saw revenue declines. Revenue in the Data Center Group, which sells chips for data center services, fell 16% year-over-year, to $6.1 billion. Internet of Things unit sales also fell 16%, to $777 million, and the Flash Memory unit saw revenue drop 1%, to $1.2 billion. Sales in Intel’s programmable solutions group, which sells field-programmable gate arrays that can be reprogrammed for different workloads, fell 16%, to $422 million.

Charles King of Pund-IT Inc. told SiliconANGLE that the performance of Intel’s data center and IoT groups was worrying, but said this probably reflects the continued impact of COVID-19 on IT spending more than anything else.

“Those points aside, in times of crisis and economic instability businesses and consumers tend to stick with the companies they best know and trust,” King said. “While Intel is experiencing pressure for alternative solution vendors, its strong brand seems to be providing some cover in tough times.”

On Gelsinger, King described him as a deeply knowledgeable technologist and an experienced leader that prizes directness, both in words and in action. “Intel was wise to choose him to lead the company into its next era,” he said.

“Tiger Lake demand looks strong on the PC side and I think, based on its 33% growth, likely gained market share,” Moorhead said. “While the data center business did better than expected, it was weighed down by the cloud ingestion cycle, competition, and continued decline in enterprise and government purchases.”

He added that Mobileye’s performance was a huge standout with its quarterly revenue growth driving a 93% improvement in profitability. “Mobileye is on its way to be an over-billion-dollar annualized business, a real accomplishment,” he said.

Swan told investors that Intel significantly exceeded its expectations for the quarter and that demand for the computing performance it delivers remains strong going into 2021.

“It has been an honor to lead this wonderful company, and I am proud of what we have achieved as a team,” Swan said. “Intel is in a strong strategic and financial position as we make this leadership transition and take Intel to the next level.”