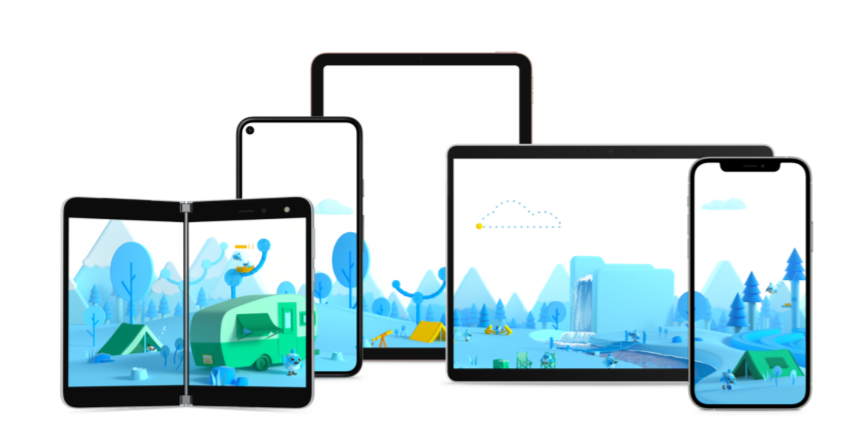 Google LLC pushed out a major update today to its open-source Flutter framework that’s used to build applications that can run on multiple computing platforms.

The big news is that Flutter 2, as the release is called, has been expanded to become a portable framework rather than just a mobile framework, which means it can now be used to create slick, feature-filled web-based applications.

Flutter is a framework that’s used by developers to build “native” apps on operating systems such as Android that can also run on other platforms, such as iOS, Windows and MacOS. The idea is that they can write their apps just once using Google’s Dart programming language and have them run perfectly across all of those platforms, without needing to tinker with the code for each version.

Dart, which is a client-optimized programming language created by Google that’s used to write mobile, desktop, server and web applications, has also been updated to coincide with the new release, the company said.

Google said in a blog post that its main goal with Flutter 2 is to “fundamentally shift how developers think about building their apps,” by focusing on the experience they want to create rather than the platform they’re targeting.

To that end, the Flutter 2 release introduces what Google said is “production-quality support for the web.” This, Google said, will help developers to take advantage of web innovations such as richer platform application programming interfaces that enable more sophisticated apps with hardware-accelerated 2D and 3D graphics and more flexible layouts.

Flutter 2 focuses on three specific web app scenarios: progressive web apps that combine the reach of the internet with the capabilities of desktop apps, single page apps that load once and transmit data to and from web services, and existing Flutter mobile apps to the web that it’s bringing to the web.

Tim Sneath, product lead for Flutter at Google, told SiliconANGLE in an interview that Flutter 2 makes it possible for mobile app developers to reach the web with the same code base. He said it’s a major benefit because it makes it easy for people to use the services without installing an app.

“That’s the marquee feature for this release,” Sneath said. “You can reduce the pain and friction of that onboarding experience.”

The update also underscores how Flutter has evolved from its roots as a simple user interface toolkit into a much broader software development toolkit. “We see Flutter as Google’s solution to get to all these places that are difficult to get to with other approaches,” Sneath said.

Google said there are more than 150,000 existing apps on Google Play built with Flutter, and because they all get a free upgrade to Flutter 2, they can now target both desktops and the web without being rewritten.

The Flutter team has been working hard to optimize the performance of Flutter apps on the web, Google said. For example, it has added a new CanvasKit-powered rendering engine, plus features such as text autofill and control over address bar URLs and routing. Also new is support for interactive scrollbars, keyboard shortcuts and accessibility features on Windows, macOS and ChromeOS.

Google said a number of developers have already brought their Flutter apps to the web. For example, iRobot Corp., which is known for its popular Root educational robots, has taken its existing educational programming environment and moved it to the web to expand its availability to Chromebooks and other devices. And Rive Inc. has created a web-based version of its animation design tool that’s available now in beta.

Flutter 2’s expanded portability means that Flutter-based apps are now running on multiple platforms too. For example, Canonical Ltd., which heads up development of the popular Linux-based operating system Ubuntu, has made Flutter the default framework for all of its future desktop and mobile apps and today showed off its new installer app, built from the ground up using Flutter.

Microsoft Corp. too has also been won over by Flutter, and is expanding support for the framework on its Windows operating system. It’s also releasing some contributions to the Flutter engine that support the emerging class of foldable Android devices, Google said. 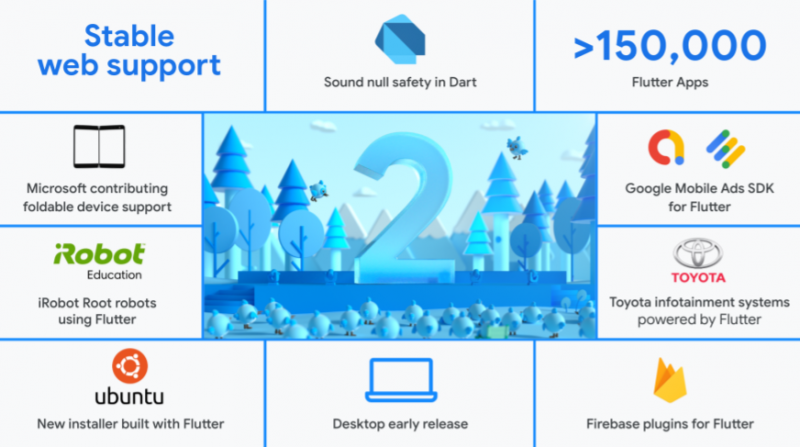 Sneath told SiliconANGLE that Microsoft has seen a lot of potential in Flutter and believes that the framework can help to expand its own ecosystem. “They want to see more apps built for Windows and this is an enabler,” he said.

Flutter’s new portability was made possible thanks to the Dart programming language that it’s written in. Dart, which has just been updated to version 2.12, is also the language used to write apps in Flutter and is able to recompile its code into JavaScript, the main programming language for the web, Sneath explained.

Other new features in Flutter 2 include the beta release of Google Mobile Ads for Flutter, which is a new software development kit that works with Google’s AdMob and AdManager products and makes it possible to create various ad formats in Flutter apps. In addition, the release includes something called Flutter Fix, a new feature that makes it possible to modify existing code for the new version of the Flutter API, Sneath said.

Constellation Research Inc. analyst Holger Mueller said Flutter 2 looks to be a strong release, noting that it has effectively become the de facto development platform for Google these days.

“Developers are taking notice of that, and they’re adopting Flutter more and more,” Mueller said. “Flutter 2 should fuel interest in the platform further. Enterprise executives will like the developments as they will help to increase developer velocity, though the price they will pay for that is more dependence on both the tool itself and Google.”