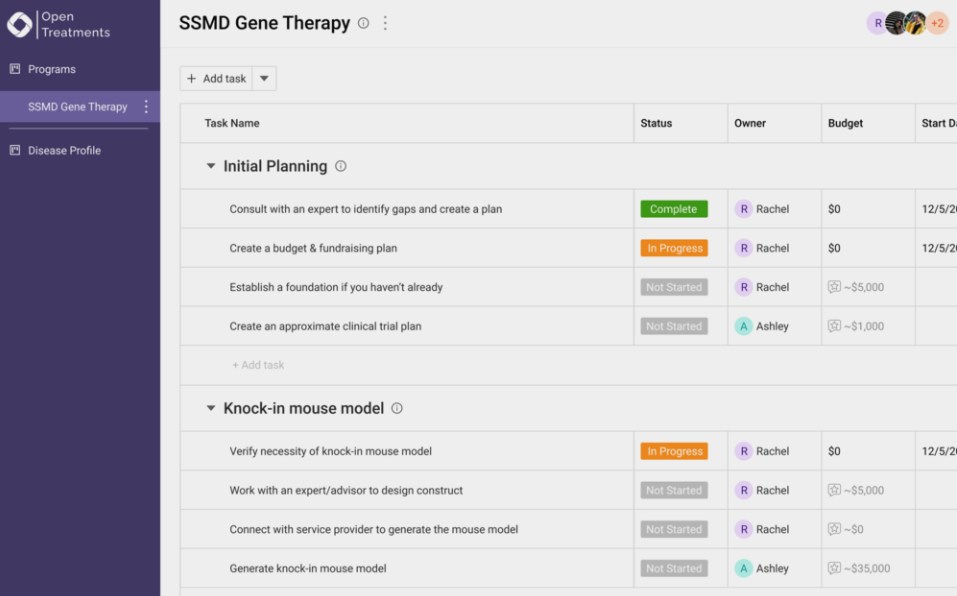 The OpenTreatments Foundation said today that its open-source RareCamp software will be hosted by the Linux Foundation, as part of its effort to make that platform available to anyone to kickstart the creation of new gene therapies for rare genetic diseases.

The idea with the RareCamp software is to decentralize drug development by putting the ability to create new treatments directly into the hands of parents and others whose loved ones might be affected by extremely rare genetic diseases.

The RareCamp platform consists of open-source project management tools that parents can use to organize research efforts into new gene therapy treatments for any monogenic rare disease. Gene therapy is an experimental technique that uses genes to treat or prevent genetic diseases, in one of three ways: replacing a mutated gene that causes diseases with a healthy copy of that gene, inactivating or “knocking out” a mutated gene that is functioning improperly, or introducing a new gene to the body to help fight the disease.

One of the problems with gene therapy is that it’s an underserved area, simply because it isn’t profitable for drug companies to spend large amounts of money funding new treatments that will only ever be used by a very limited number of people. The OpenTreatments Foundation says more than 95% of rare diseases do not have an approved treatment, and new treatments are estimated to cost more than $1 billion to create.

Ramesh is a software developer who has personal experience of the devastating impact rare genetic conditions can have, as well as the difficulty in finding a treatment. His two-year-old son Raghav is one of just nine children worldwide who has been identified as suffering from a genetic disease called Sedaghatian type Spondylometaphyseal Dysplasia, or SSMD.

Due to his condition, Raghav is unable to sit, stand or walk, and cannot eat or drink food orally. At the time of his diagnoses, doctors told Ramesh that there is no cure or treatment for his son’s condition. That prompted him to begin researching gene therapy treatments on his own.

Ramesh told SiliconANGLE that he created the OpenTreatments Foundation and the RareCamp framework to foster more collaboration between people who live with rare genetic diseases and the experts who can help them.

“When I started my quest to find a treatment for my son, I realized there were literally hundreds of thousands of people around the world qualified to help me,” Ramesh said. “They are scientists, entrepreneurs, philanthropists and parents who have answers to a small piece of the big puzzle. But there was no way for all of them to collaborate in a structured manner towards a common outcome.”

He added that in his 10-year software career, he created several successful open-source communities and witnessed large-scale collaboration where individuals with talent would come together and help each other. “So I thought, what if brought the power of open-source collaboration to the biotech industry?”

With the RareCamp platform, Ramesh said parents can get started on creating a roadmap for a new gene therapy treatment within just minutes. Besides coming up with new treatments, other possible outcomes include identifying existing drugs and treatments that may help to fight the disease, a technique known as drug repurposing.

The platform provides access to a community of science experts on gene therapy research, who can provide guidance on possible treatments.

“Our vision is to decentralize drug development and put the power in the hands of patients to create treatments,” Ramesh said. “The RareCamp software will provide a clear roadmap, access to people, and biotech-grade infrastructure for patient-led organizations to run the drug development program like a well-oiled biotech company. The software also provides project management capabilities to keep the project on track and reduce the time and money it takes to find treatments.”

One of the biggest obstacles with any kind of medical research is funding, so a key focus on the OpenTreatments Foundation is helping parents to secure the financial backing they need, Ramesh said. He explained that people can use the platform to start a nonprofit organization, then create a team of scientists and researchers and begin raising money to fund the research. Possible fundraising techniques include crowdfunding, securing grants and appealing to high-net-worth individuals.

“Our mission of OpenTreatments Foundation is to work with patient-led organizations to accelerate drug development programs to clinical trials or even beyond, as far as an organization would like to drive them,” Ramesh said.

RareCamp is supported by individual contributors, as well as collaborations from organizations such as Baylor College of Medicine, Castle IRB, Charles River, Columbus Children’s Foundation, GlobalGenes, Odylia Therapeutics, RARE-X and Turing.com. The platform uses the open source Javascript framework NextJS for frontend and the Amazon Web Services serverless stack to power the backend, as well as the open-source toolchain Serverless Framework to develop and deploy the software. It is licensed under Apache 2.0 and available for anyone to use.

“The internet and the cloud are the great equalizers that can bring small communities and experts together in a fast and cost-effective way,” said Constellation Research Inc. analyst Holger Mueller. “This is especially true in the case of rare diseases that are often overlooked by mainstream medicine, so it is great to see the OpenTreatments framework addressing this, bringing patients, doctors and scientists together on a global scale.”