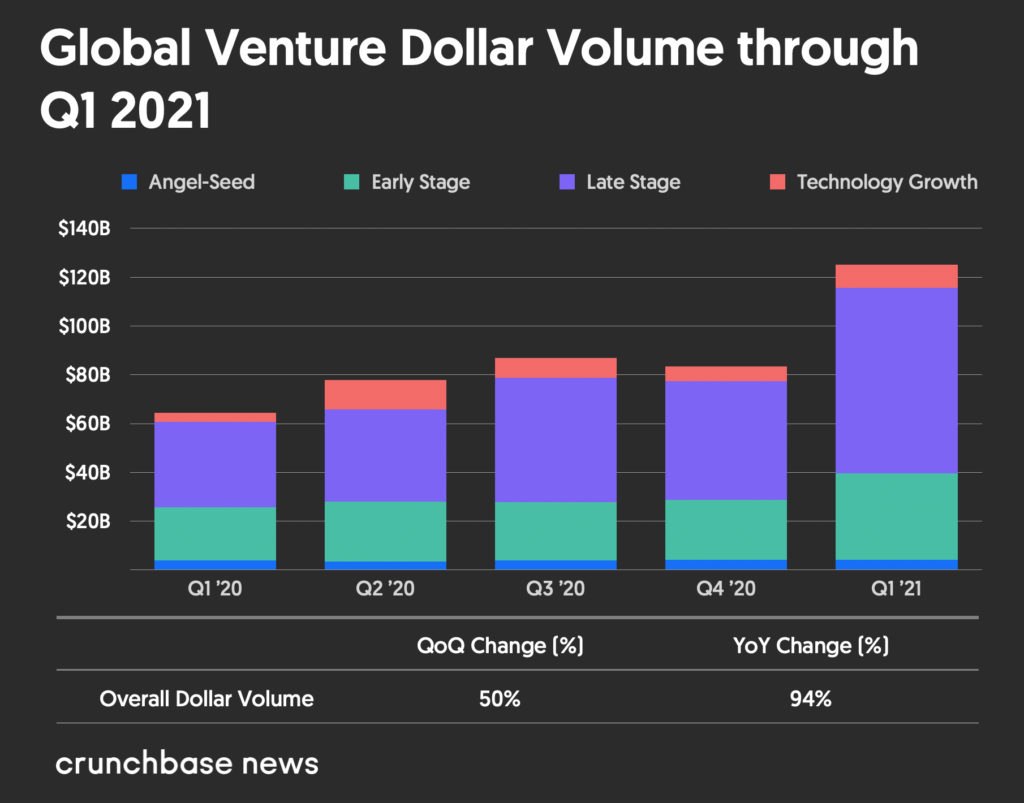 Global venture capital deals pass $100B in the first quarter

Global venture capital investments hit $125 billion in the first quarter, the first time the figure has surpassed $100 billion in a quarter, according to new data published today by Crunchbase.

The $125 billion invested in the quarter was up 50% over the fourth quarter of 2020 and up 94% from the first quarter of 2020. Emphasizing how rapidly money is flowing, the number of new unicorns, companies with a valuation of $1 billion or more, surged to nearly two per day in the quarter, well above previous records.

The report notes that the surge of investment comes as the S&P 500 index is also at an all-time high, encouraging more companies to go public, combined with a year of strong growth for many startups thanks to the COVID-19 pandemic.

Moreover, startups have more avenues to go public, in particular special-purpose acquisition companies. SPACs, though not a new idea, were rare in the tech startup sector a year ago but have come to the fore as a way for companies to go public without going through a formal initial public offering process. Instead, a SPAC deal involves a startup merging with an already listed company, usually with large sums of money involved.

At the other end of the market, seed funding deals saw $4.1 billion invested in the quarter, down slightly from $4.2 billion in the previous quarter. Except for the second quarter of 2020, seed funding has held fairly steady over the last year by money invested. Early-stage funding in the quarter came in at $33.5 billion, up 45% from the previous quarter and 63% year-over-year.

Late-stage funding rose 56% from the previous quarter, to $85.6 billion, also up 122% year-over-year. The report notes that a high proportion of the growth was in rounds of $100 million and above, accounting for 79% of all late-stage deals.

The number of acquisitions also rose 26% from the previous quarter and 44% year-over-year, to 631 deals. Notable deals in the quarter included GlobalLogic Inc.’s acquisition by Hitachi Ltd. for $9.6 billion and Okta Inc.’s purchase of Auth0 Inc. for $6.5 billion.