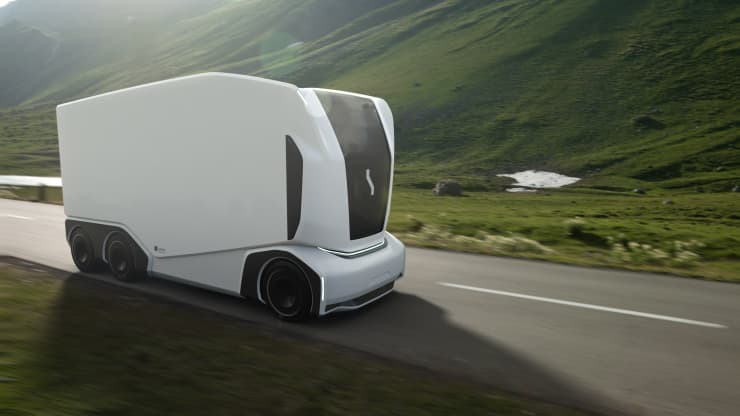 Startup Einride AB today announced that it has raised $110 million in funding to support the rollout of its autonomous freight vehicles, which have no driver cabin and promise to reduce shipping-related carbon emissions by more than 90%.

The investment follows a $25 million round for the startup in late 2019.

Sweden-based Einride is the developer of the Einride Pod (pictured), an electric freight transportation vehicle that drives itself with the help of an onboard artificial intelligence system. The startup says that the Pod can help companies reduce carbon emissions by as much as 94% compared with using traditional diesel trucks. The vehicle has drawn early interest from brands such as Coca-Cola Co. and Swedish home appliance Electrolux AG, which are currently using it in pilot tests.

Each Einride Pod has capacity for up to 18 pallets that it’s theoretically capable of transporting over distances of more than 100 miles. Currently, however, Einride only supports more limited use cases. Companies can use Pods to transport goods in areas that aren’t open to public traffic, such as a road connecting two facilities located on the same corporate campus, or to make short trips on public roads.

In 2022 and 2023, Einride plans to add support for more complex routes. The startup stated last year that the goal is enabling Pods to transport merchandise on highways and other major roads at speeds of more than 50 miles per hour.

The $110 million investment announced today, which is more than four times the size of Einride’s previous round, should enable the startup to expand its go-to-market operations significantly. The company said it plans to spend the new funds on growing its installed base across Europe and the U.S. The startup sees big opportunities ahead: The U.S. road freight market alone was worth about $1.1 trillion in 2020, according to an estimate cited by Einride.

The new capital could also help the startup expand engineering operations. Though it had previously raised only about $42 million in total funding, Einride has managed to introduce two generations of autonomous vehicles within just a few years. The newest iteration of the Pod, which debuted in late 2020, runs its AI driving algorithms on an Orin system-on-chip from Nvidia Corp. with 17 billion transistors.

Einride’s newly announced $110 million round saw the participation of more than half a dozen institutional investors. Among them were Swedish communications equipment maker Ericsson and Maersk Growth, the venture arm of shipping giant Maersk AS.

Though still nascent, the autonomous freight transportation market in which Einride competes is already crowded. The startup faces competition not only from fellow startups but also some of the tech industry’s most well-known companies. Among them is Alphabet Inc., which through its Waymo business is actively working to develop autonomous truck technology.