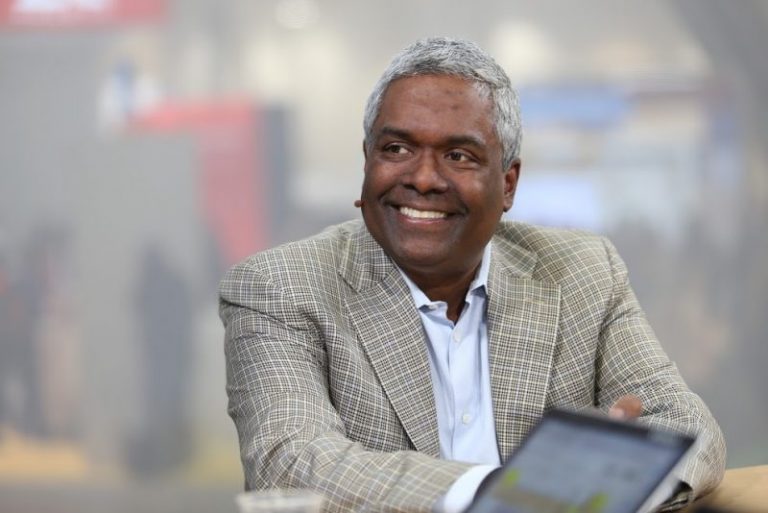 The company reported a profit before certain costs such as stock compensation of $1.17 per share on revenue of $1.56 billion for the quarter, up from $1.4 billion in sales in the year-ago period. That was not a bad performance, coming in just above Wall Street’s model of $1.12 per share in earnings and $1.5 billion in revenue. For the full year, NetApp posted total revenue of $5.74 billion.

NetApp Chief Executive George Kurian (pictured) told shareholders that the quarter capped off a solid year of growth for the company.

“Our momentum underscores our value to customers in a hybrid, multicloud world,” he said. “We are gaining share in key storage markets and our public cloud services are at a scale where they are positively impacting total company billings and revenue growth.”

NetApp is known as a provider of enterprise storage systems, but in recent times it has been trying to reinvent itself as more of a hybrid cloud data services and data management player. The good news is that it’s making good progress in the cloud, with the annualized revenue run rate of its public cloud services business growing to $301 million, up 171% from a year ago.

The company’s billings, which represents invoices that are due for payment shortly, rose 12%, to $1.74 billion, at the end of the quarter.

NetApp’s flash storage business was another highlight, with an annualized net revenue run rate of $2.9 billion, up 11% from a year ago.

Moor Insights & Strategy analyst Steve McDowell told SiliconANGLE that NetApp had nice quarter overall and that he wasn’t surprised by the numbers given the healthy financials reported by the likes of Dell Technologies Inc. and Hewlett Packard Enterprise Co. recently.

What did surprise McDowell, though, was the momentum NetApp showed in its cloud business, which includes its general cloud storage services and also its container-focused cloud-native offerings. He said it’s hard to break things out with precision because NetApp bundles its cloud earnings with overall software subscriptions and its lucrative support business, but he said the metrics looked “overwhelmingly positive” nonetheless.

“NetApp added 1,500 new customers to its cloud business,” McDowell continued. “These are exactly the kinds of numbers that we want to see for an emerging business, especially one as tied to the company’s overall strategy as cloud and cloud-native are to NetApp’s. They’ve had a few false starts as they entered this market but are clearly finding their footing.”

Constellation Research Inc. analyst Holger Mueller said NetApp’s quarterly and full-year results are a good showcase for how to properly manage the transition to a cloud business.

“It did well by converting revenue, growing it new offerings and also managing the growth of its older offerings too,” Mueller said. “The real reason for its success though is good cost management and discipline, and NetApp delivered well on that throughout the last year.”

Earlier in the quarter, NetApp announced general availability of a new service that will be critical for its cloud business as it moves forward. NetApp Astra is a fully managed, application-aware data management service for Kubernetes-based apps.

Kubernetes is an open-source tool that’s used to orchestrate large clusters of software containers, which host the components of modern applications that can run on any kind of computing infrastructure. The technology has seen rapid adoption over the past few years, but it still causes a lot of problems for companies because of a dearth of persistent storage capabilities that containerized applications need to perform at their best. So any company that can deliver those capabilities is in position to be a winner.

McDowell told SiliconANGLE at the time that the launch of NetApp Astra makes the company a leader in the cloud-native storage market alongside rival Pure Storage Inc. But he said NetApp would do well to make the most of that, since its lead in the market probably won’t last for long.

NetApp was boosted earlier this week when it was revealed that Nvidia Corp. is partnering with the company on its new Nvidia Base Command Platform, which delivers it DGX SuperPod AI supercomputer as-a-service. That offering comes bundled with NetApp’s storage, and McDowell said that although the market is likely small, it’s a “huge validation” of the company’s high-performance storage systems.

McDowell added that he’s expecting to see a number of platform refreshes from NetApp in the coming year, noting that some of its storage products are starting to show their age.