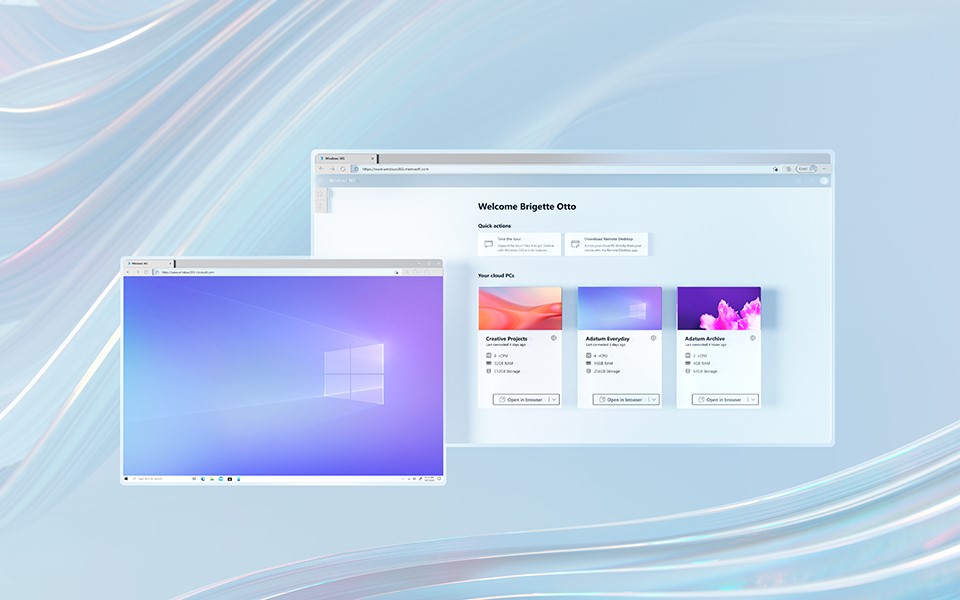 Microsoft Corp. will launch a new virtual machine service next month called Windows 365 that will enable business workers to access “Cloud PCs” from any web browser.

The company said in a blog post today that Windows 365 will be able to stream a version of Windows 10 or Windows 11 to any kind of device, including a MacBook, iPad, Linux computer or Android phone. Users will be able to pick up instantly from wherever they left off, with immediate access to their data and the applications and tools they were using.

“With Windows 365, we’re creating a new category: the Cloud PC,” Microsoft Chairman and Chief Executive Satya Nadella said in a statement. “Just like applications were brought to the cloud with SaaS, we are now bringing the operating system to the cloud, providing organizations with greater flexibility and a secure way to empower their workforce to be more productive and connected, regardless of location.”

Like all software-as-a-service products, Windows 365 will be a subscription service. Microsoft hasn’t yet said exactly how much the service will cost, though it revealed that pricing will be on a per-user, per-month basis. The company explained that it’s targeting everything from single-person businesses and enterprises with thousands of employees.

The exact cost per user will depend on what each person needs. Microsoft said there will be two editions, Business and Enterprise. It’s not clear if both will have exactly the same features and capabilities, but each one will be powered by the Azure Virtual Desktop service.

The Cloud PCs will be fully customizable, with users able to choose from a single central processing unit, 2 gigabytes of random-access memory and 64GB of storage at the low end, all the way up to eight CPUs, 32GB of RAM and 512GB of storage if they have some hardcore workflows going on. In total, there will be 12 configuration options available for both Business and Enterprise users, Microsoft said.

The Azure Virtual Desktop that powers Windows 365 Cloud PCs was previously called Windows Virtual Desktop until it was renamed last month. It also provides cloud-based access to a Windows PC, but must be accessed via the Azure Cloud service and has a rather complex pricing scheme.

Microsoft has rivals in the segment too. Amazon Web Services Inc. for example provides access to cloud-based desktops through its Amazon WorkSpaces service, and Citrix Systems Inc. has offered cloud desktops as-a-service for several years already.

But Microsoft argues that Windows 365 is much simpler than those alternatives. All workers will have to do is open their browser and go to Windows365.Microsoft.com, log in with their credentials and they’ll be in. It will be that simple, Microsoft said.

Microsoft has already enjoyed great success with this delivery model with its Office 365 suite, analyst Charles King of Pund-IT Inc. told SiliconANGLE. “In a way this reflects what consumers and workers have been doing on their own for years already, shifting more or less seamlessly between devices, operating systems and user interfaces based on their situation or need,” he said.

What’s different with Windows 365, King said, is that it will provide a more secure, uniform and homogeneous experience regardless of what device people are using. He added that the flexibility, scalability and built-in security features of Windows should be especially welcomed by businesses.

“Overall, Windows 365 looks like it should highly beneficial for Microsoft, its customers and its endpoint-focused partners,” he said.

Holger Mueller of Constellation Research Inc. told SiliconANGLE that virtual desktop infrastructure has held promise for a long time already but never quite lived up to its potential. One of the biggest challenges, which Mueller explained Microsoft has a unique ability to address, has been that enterprises still needed to license Windows even with a virtual desktop.

“It’s all coming from Microsoft now. We have the OS, the PC and the cloud service, everything in an easy bundle, Mueller said. “This offering could potentially be the breakthrough for VDI and desktops-as-a-service, which have a lot of promise for the future of work.”

The service could well be useful for companies that want to save on the expense of buying dedicated physical hardware for employees. Those workers could be equipped with a cheap PC, for example, or even be told to use their own device, and then be given access to a more powerfully configured cloud PC. The service may also tempt organizations that hire lots of remote workers or temporary contract staff who need secure access to a corporate network.

The launch of Windows 365 came on the same day as Microsoft announced a number of updates to its Azure Cloud service. The biggest news here is the launch of the Azure Migration and Modernization Program. It builds on the existing Azure Migration Program, and helps enterprises to assess how different kinds of on-premises workloads will perform, and what the costs will be, running on Azure.

Another announcement related to the preview of Azure Kubernetes Service as a source for Azure Event Grid. This makes it possible for Event Grid users to subscribe to AKS events and the availability of new version upgrades.

In related news, the Azure API Management service integration with Event Grid is also now available in preview. With this, users can set up the service to publish events to Event Grid whenever a new subscription is created on an API Management resource.