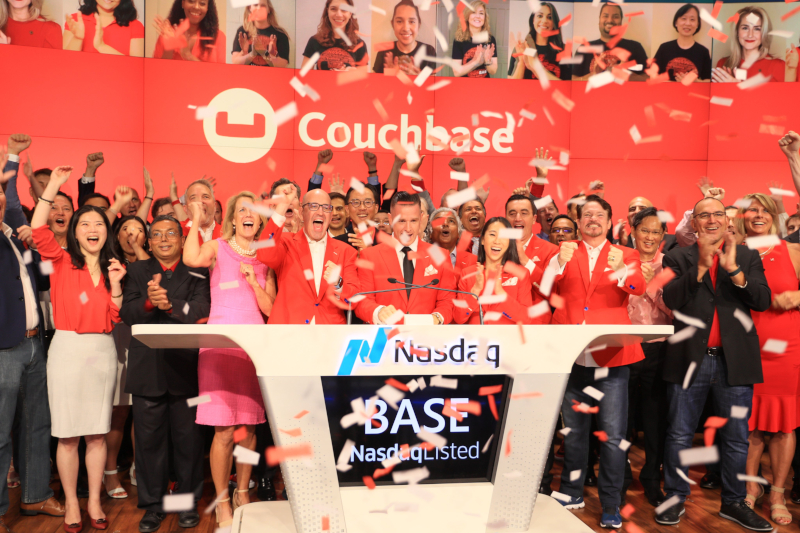 Database maker Couchbase Inc. saw its stock price jump more than 30% in its Nasdaq debut this morning, after investors bought aboout 8.3 million shares the day before during the company’s initial public offering.

The IPO fetched $200 million for Santa Clara, California-based Couchbase. The figure could rise to about $230 million if the IPO underwriters decide to exercise their option to buy an additional 1.25 million shares in the next 30 days. Morgan Stanley and Goldman Sachs & Co. were the lead underwriters.

Historically, the databases used by enterprises to store business information could efficiently accommodate either structured or unstructured information, but not both. That meant administrators had to deploy two separate databases, one for structured records and another for the unstructured variety. Companies often also require a third system to function as a cache and provide quick access to the data that their applications use most often.

Couchbase’s database can store structured and unstructured data, as well as function as a cache, which allows enterprises to accomplish with one system what previously may have required three. The company says that translates into a lower cost of ownership. It also simplifies the work of administrators and developers, since they have to operate fewer databases to keep applications running.

“Our unified platform eliminates the need to manage independent technologies and data models and helps provide consistency between multiple databases and systems in different languages and application programming interfaces,” the company explained in its IPO filing.

Couchbase’s value proposition has helped it win deals with big-name customers such as Cisco Systems Inc., eBay Inc. and the operator of the Nasdaq stock exchange. Those customers generated revenue of $103.3 million for Couchbase in its most recent fiscal year ended Jan. 31. The figure represents a 25% improvement over the company’s sales in the previous 12-month period.

In the first quarter ended April 30, Couchbase grew revenues by 21% to $28 million and lost $14.6 million. The more than 30% jump in the price of Couchbase shares today shows that investors have shrugged off the losses and are more focused on the company’s growth prospects. In the IPO filing, the company estimated that its total addressable market, which encompasses both the relational and nonrelational database segments, is set to grow 50% by 2024, to $60 billion.

Couchbase has said that it plans to maintain revenue momentum by bringing new offerings to market. The company told investors ahead of the listing that it intends to introduce additional capabilities for applications developers, as well as make the managed cloud version of its database available on the major infrastructure-as-a-service platforms.

The product strategy of MongoDB Inc., another publicly traded database maker, may provide additional context about the opportunities Couchbase has to boost revenue by adding more products.

MongoDB started out providing a NoSQL database of the same name. After going public in 2017, the company launched additional products to help enterprises put the information they store in its databases into operation. MongoDB introduced, among other solutions, a search engine for finding specific records in large databases and a data lake service that can help companies analyze their information for useful insights into their business.

The company’s decision to build on the success of its database to expand into other parts of the data management market has paid dividends. MongoDB’s current share price is more than 10 times higher than at the time of its IPO.

Couchbase listed MongoDB among its competitors in the IPO filing: “According to a 2020 study commissioned by us and published by Altoros, Couchbase Cloud processed more operations per dollar with a lower TCO [total cost of ownership] compared to MongoDB’s Atlas cloud service and Amazon’s DynamoDB database service.” Couchbase Cloud and MongoDB Atlas are the cloud versions of the companies’ respective databases.

At its current stock price of about $31.30 per share, Couchbase has a market capitalization of about $1.2 billion. The company, whose ticker symbol is BASE, raised $251 million in funding prior to going public from Accel, Mayfield Fund and other investors.