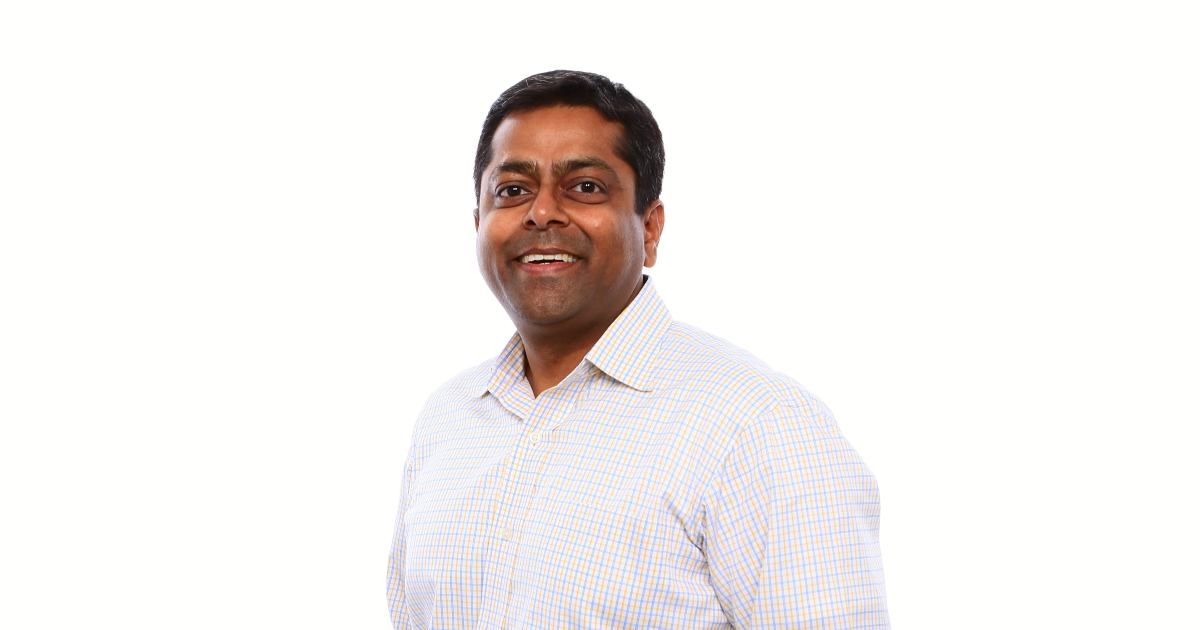 We spoke with the CEOs of companies that participated in the recent AWS Startup Showcase: Innovations With CloudData and CloudOps to find out what drives them and learn about their visions for the future. This is the seventh feature in our CEO Startup Spotlight series.

The origin of the name Reltio comes from relationships, transactions, interactions and full circle 360 o — representing the mission of its founder and Chief Technology Officer (and formerly Chief Executive Officer) Manish Sood (pictured) when he formed Reltio Inc. in 2011 to solve the problem of fragmented data silos.

Born in New Delhi, Sood was raised and educated in India during the late 80s and early 90s, a time when the country’s economy was beginning to thrive and global organizations were expanding to the region. After graduating with a degree in engineering, Sood was fortunate to have ample employment opportunities with a variety of companies.

He chose to work for an engineering-driven firm that was focused on bringing new technologies to the Indian landscape.

“That experience created a good learning opportunity in terms of what kind of impact, both social and economic, that technology can have on a country and the transformation it can lead to,” Sood said.

Moving on to a multinational organization headquartered in Japan, Sood was then exposed to large-scale business and the challenges associated with working across geographies and starting from scratch in unfamiliar areas. He assisted with the company’s immersion into India and building its operations from the ground up, which introduced a new manner of thinking for Sood — what are the possibilities?

A turning point came when Sood was invited to join a consulting firm and relocate to the U.S. in 1999. After several years of working in technology and with global company experience under his belt, he said the move was an eye-opening experience.

“Here in the states, there was no fear of failure if somebody had an idea and wanted to try it out, it was more about embracing the idea and moving forward rather than being held back by fear,” he said. “That’s different from many other cultures across the world where there is a stigma around failing instead of simply getting back up, dusting off, and moving on to the next thing you want to do.”

Seeing the pace of innovation in the U.S. and the ability to work on endless new ideas helped inform Sood’s journey as an entrepreneur.

Taking on the data integration problem

Much of the work Sood was involved with at the time focused on large-scale system integration projects and trying to solve data integration problems. In 2002, he had the opportunity to work with Siperian LLC, where he led product strategy and management for the Master Data Management platform until 2010 when Siperian was acquired by Informatica LLC.

“Those years were a great learning experience because we were able to take a concept all the way to a mature product and define an industry leader in that space,” Sood explained.

After spending eight years on MDM, he said it was very clear where the market was headed. Increasingly, organizations would come to rely on many applications to solve different issues.

“Software as a service has made it easier, faster and cheaper to create new applications to address critical problems, but none of these applications in themselves connect all the pieces of the puzzle together in a uniform manner,” he said. “Multiple applications address different areas with different functionality across the organization, and that creates an opportunity for a platform like Reltio. One of the biggest friction points today in business is the fragmentation of data resulting from an increased number of application silos.”

“When you call the bank’s 800 number to inquire about your credit card, often you’ll reach someone who can’t help you and you have to be switched over to someone else in a different department,” he explained. “It’s a very disconnected experience. Compare that with Amazon, where you find everything you want under one Prime account. Customers want to have access to all their information when they need it. That is the kind of experience that we have all come to expect, but most businesses are not set up that way.”

And that is where Reltio comes in. In 2011, Sood and team identified the opportunity that fragmented siloed data presented and began building an end-to-end, SaaS platform that would offer companies a single source of truth for information.

“We knew very well that the number of systems companies have would only increase in number, making it more difficult to get the single source of truth or the single best profile of a customer, a supplier or a product,” Sood said. “The core problem we wanted to solve was to bridge the gap created by silos and create a unified view of the core critical information that these companies run on.”

Sood, who helped create some of the earlier generation MDM capabilities, explained that legacy MDM solutions couldn’t keep pace with the increasing number of sources or the depth and breadth of the information that companies want to capture in order to better inform decisions and facilitate the next engagement, or time to action.

“We decided that not only would we use at scale compute capabilities in the cloud with AWS as the backbone, but also solve some of the core problems around how more sources of information can be unified,” he said. “Every potential customer we talked to wanted to figure out how to get to the point of engagement faster and how they could influence the consumer’s decision making more quickly.”

The Reltio Connected Data Platform allows customers to stitch together and unify data from different fragmented siloed applications or data sources they have within their enterprise. At the same time, companies rely on third-party data, such as Bradstreet or IQVIA in the life sciences. Reltio allows them to combine external data sources with their own in-house data to get the best view of a customer, product or supplier.

The cloud native data management platform supports billions of customer profiles, enriched with thousands of attributes, relationships, transactions and interactions from hundreds of data sources. The platform “is not a CRM system by itself, but is an information application that can aid and assist in the decision-making process,” explained Sood, adding that this capability can also serve as a starting point for the digital transformation companies want to achieve.

Life sciences was the first vertical market Reltio addressed, and today the company has nine of the 10 largest global pharma companies and multiple CROs, including Bioclinica, IQVIA Inc., and Syneos Health Inc.. In addition, R&D teams across the world gather and share data using Reltio, according to the company. AstraZeneca PLC is a long-time customer and uses the Reltio Connected Data Platform to enroll and manage clinical trials.

Reltio has added healthcare insurance, financial services, retail and high tech to its customer roster, which includes CarMax, Quicken Loans and Subway, to name a few.

Quicken Loans uses Reltio as its customer data unification platform behind the scenes. With every interaction that takes place, Quicken’s goal is to have a very narrow window of time between when someone expresses an interest in refinancing or getting a mortgage and when they can close that business.

“With Reltio, they’ve been able to use this notion of real-time data, where a prospective customer can be identified through the channel they use, whether it’s an 800 number or the website, for example, and reach out to them with an offer before the competition does. That ability to respond in real time was the missing last mile in the equation; it didn’t exist with previous-generation MDM.”

Accelerated growth and changing of the guard

Reltio has achieved some impressive milestones. In 2020, it reached $74 million of subscription-based annual recurring revenue and expects to hit $100 million ARR by the end of this year.

The company is growing in size as well. Today Reltio has about 300 employees, and Sood expects that number to reach 400 this year.

From the beginning, large enterprises have been the primary customer focus, and Reltio has acquired 110 in that segment. At the start of 2021, the company expanded its product delivery to include a self-service mechanism through the website. Since then it has picked up an additional 200 customers in the span of just four months, bringing the total number of customers to more than 300.

Sood considers customer longevity to be a significant achievement as well.

“The size and scale of customers is important — those that started their journey with us five or six years ago and have expanded their use of the platform,” he said. “That kind of growth where customers are continuing to invest more as we deliver better capabilities, and where the product becomes a key part of their strategy, is extremely satisfying.”

As the founder of Reltio, Sood held the position of chief executive officer up until September 2020. He recognized last year that the company is on a critical growth trajectory and decided to find a replacement.

“In the process of founding and then growing Reltio at each and every stage, I’ve constantly tried to keep in mind what the market opportunity is we’re trying to build to and how we can get the company to reach that opportunity in the shortest possible time frame,” he explained. “That orientation has helped me think about who are the best team members to bring into the fold so we can run faster. This is not about me; it’s about the business we have built and the ability to scale that business.”

Chris Hylen was announced as Reltio’s new CEO on September 1, 2020, to take the company to its next level of growth. He was previously CEO of Imperva Inc., a leading provider of cybersecurity solutions. Within two years, Hylen led the company’s turnaround, accelerated growth at the $300M public company and successfully executed a $2.3B sale to private equity giant Thoma Bravo LP in January 2019.

As CTO, Sood can focus on innovation and build on his vision for creating connected experiences, develop the product capabilities to meet customer requirements, and address the problems they are trying to solve.

“I never thought of myself as an entrepreneur, but in 2011, I just could not shake the idea out of my head that there must be a better way of solving the problem of fragmented silos of information and data integration,” Sood reflected. “That compelled me to start working on it and so that is where my journey as an entrepreneur began.”