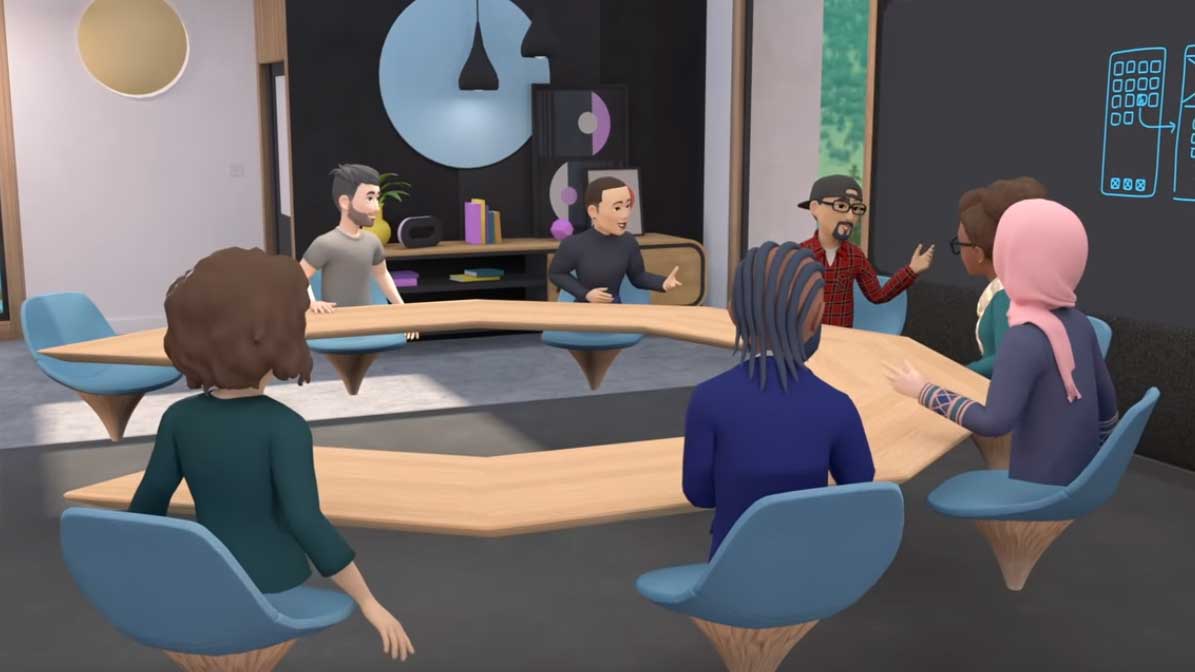 Workrooms comes at a time when more teams are separated by physical distance due to the COVID-19 pandemic and find themselves working remotely. The promise of virtual reality is that it creates immersive spaces that look and feel like actual rooms that recreate the sensation of being around other people.

According to Facebook, the company has put Workrooms to work internally and seen good results, though some observers are not as impressed with its potential.

In the room, users sit around a table and see their own computer screen and keyboard. It gives everyone the opportunity to gather around, see everyone else and experience being in the same space even if they’re miles apart.

Workers use personally designed avatars for themselves, which Facebook launched earlier this year, that are visually expressive. The room also uses high-quality spatial audio that makes it sound like colleagues are speaking from where they’re seated. When coupled with the expressive avatars, which will turn their heads with the users’ gaze, it makes conversations much more realistic.

Forrester Vice President and Principal Analyst J.P. Gownder believes that virtual rooms such as Workrooms can help combat problems with remote work such as “Zoom fatigue” as well by breaking away from the two dimensional and putting people back into immersive spaces.

“In a physical office, people move around, draw on whiteboards, break into groups,” said Grownder. “We can turn to look at different people rather than a Brady Bunch row of faces. If someone is far away, they sound different than if they are up close. In other words, we need something more than Zoom. But physical offices are still dangerous places during the pandemic and workers no longer want to be in them full-time.”

Every room offers a virtual whiteboard that offers an infinite space that anyone in the room can access and see at any time. This creates a broad and accessible canvas for easy interaction and collaboration — users can draw on it and even add images and documents from their own computer. The whiteboard remains as long as it is needed and can be revisited in future meetings.

It is possible to join the meeting room by videoconference as well as VR, an important accessibility feature because not everyone has a VR headset. People who join the meeting by call will appear on a video screen in the room instead of as an avatar. Currently, the meeting rooms can support up to 16 people in VR and a total of 50 people on a call.

Workrooms is designed from the ground up to allow people to operate with their hands, not controllers, as the primary input. This creates a more natural and expressive social experience when using the product. It also makes it easier for people to use it at their computers, as some people will be switching between talking to colleagues and typing at their keyboards.

As the pandemic has spurred an interest in remote work, and hybrid offices, remote work has become the norm. This has created an increased need for dealing with the rigors of the isolation of remote work.

To get started with Horizon Workrooms users will need to set up an account, which is separate from Oculus and Facebook accounts. To experience Workrooms VR users will require a Quest 2 headset, which costs $399, although a headset is not required to videoconference into a meeting.