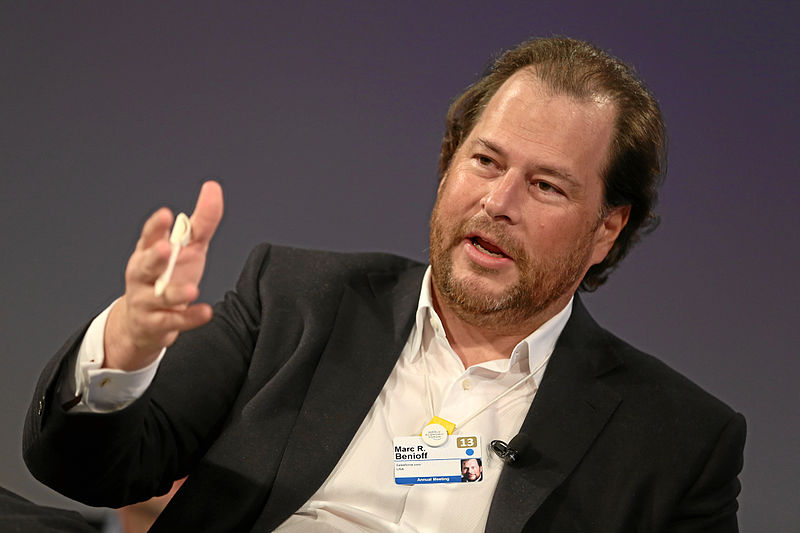 Shares in Saleforce.com Inc. rose in after-hours trading today after the company beat analyst expectations and boosted its forecast for the full fiscal year.

For the quarter ending July 31, Salesforce reported total revenue of $6.34 billion, up 23% year-over-year, the first time the company has surpassed $6 billion in quarterly revenue. Profit before costs such as stock compensation came in at $1.48 per share. Analysts had been predicting a profit of 92 cents per share on revenue of $6.24 billion.

The revenue figure was driven by subscription and support revenues increasing 21% from the same quarter of last year to $5.91 billion. Within that $5.91 billion, Sales Cloud revenue was up 15% to $1.5 billion, Service Cloud revenue rose 23%, to $1.6 billion, and marketing and commerce revenue rose 28%, to $1 billion. Platform and Other, which includes MuleSoft and Tableau units, rose 24%, to $1.8 billion. Professional services jumped 37%, to $430 million.

“With companies and governments around the world continuing to accelerate their digital transformations, we delivered our fifth phenomenal quarter in a row,” Marc Benioff (pictured), chairman and chief executive officer of Salesforce, said in a statement. “Salesforce has never seen better execution or greater momentum.”

Benioff also noted the success Salesforce was having with its Customer 360 platform is in part thanks to its being fueled by “a herd of unicorns,” mentioning Tableau, MuleSoft and now Slack. Some of those acquisitions are more recent than others. Salesforce acquired MuleSoft for $6.5 billion in March 2018 and Tableau for $15.7 billion in June 2019. Salesforce announced it entered an agreement to acquire Slack for $27.7 billion in December and finalized the deal on July 21.

Chris Rothstein, chief executive officer of Salesforce-native sales engagement platform developer Groove, incorporated as Groove Labs Inc., told SiliconANGLE that Salesforce and CRM platforms have proven to be indispensable to businesses during the pandemic. “As a result of this, investors have continued to pour money into sales enablement and revenue intelligence platforms, many of which run natively in Salesforce,” Rothstein added.

Looking forward, Salesforce said it expects revenue of $6.78 billion to $6.79 billion in the third quarter and adjusted earnings per share of 91 to 92 cents. Analyst had forecast 82 cents per share on revenue of $6.66 billion.

Benioff made a lofty prediction on the company’s earnings call, saying that Salesforce was on track to double its revenue in the next five years.

“We are really quite confident and remain on our path to generate $50 billion in revenue by fiscal year 2026, which doesn’t seem very far away from right now,” Benioff said. “And when we first gave that number, it didn’t seem as — it seemed like it was so far away. Now it seems like, wow, this is going to happen.”