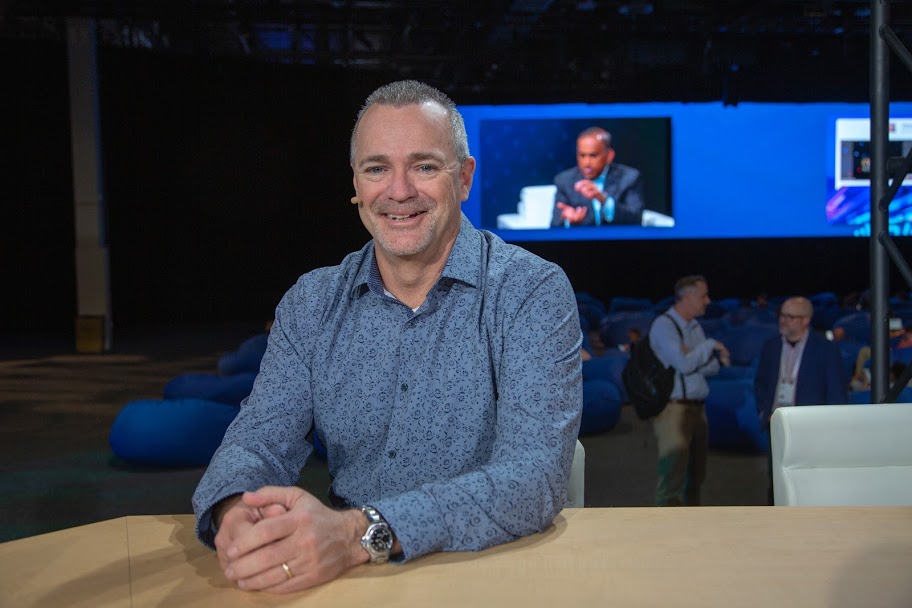 That was better than expected, with Wall Street looking for earnings of $2.18 per share on sales of $26.82 billion.

Dell Vice Chairman and co-Chief Operating Officer Jeff Clarke (pictured) said the company is clearly winning in its core businesses, staying at the center of customer’s information technology and digital agendas. “Our product, global operations and sales teams did an outstanding job this quarter as we shipped a record number of products and delivered record revenue of $28.4 billion,” he said.

The lion’s share of the company’s revenue continues to come from its Client Solutions group, which accounts for Dell’s personal computer sales and did $16.5 billion in revenue in the third quarter, a 35% increase from one year ago. Dell executives said the company saw especially strong demand for commercial PC systems, high-end consumer PCs and gaming machines.

Within the segment, commercial revenue came to $12.3 billion, up 40%, while consumer revenue chipped in with $4.3 billion, up 21%. Dell’s operating income from the Client Solutions group came to $1.1 billion, up 14% from a year ago.

Clarke told analysts on a call how the company’s newest PC products were pairing Windows 11 with Dell Optimizer built-in intelligence to deliver highly personalized, productive computing experiences. “We believe the introduction of Windows 11 will continue to drive demand in PCs,” he added.

Dell’s other big business is its Infrastructure Solutions Group, which accounts for the various bits of data center hardware it sells. The unit reported revenue of $8.4 billion, up 5% from a year ago and the third successive quarter of positive year-over-year growth.

Officials said customers are accelerating their IT investments across the board. Hence servers and networking sales grew by 9% from a year ago to $4.5 billion, while storage revenue rose 1%, to $3.9 billion. Operating income for the unit came to $892 million, up 1%.

Dell also squeezed out its last bit of revenue from VMware Inc. during the quarter before its former subsidiary completed its spin-off and became a separate company. Dell decided to sell VMware to pay off billions in debt relating to its 2016 purchase of EMC Corp, though the companies plan to continue working together closely. During the quarter, VMware added an additional $3.17 billion in sales before that deal was finalized.

“It blew away the top-line number, cash flow was very solid and the balance sheet is back to investment grade,” he said. “There’s really not a lot to criticize here. Storage growth remained muted because of high-end headwinds, but the modern storage platforms all grew deep into the double digits. So it’s just a matter of time before that business shows significant growth, which is important because storage has a higher margin business.”

Vellante said one reason for Dell’s success was its brilliant management of supply chain issues and component costs, which stand out all the more so considering the impact those problems have had on other big-name technology firms such as Apple Inc. and Cisco Systems Inc.

Looking ahead, Vellante said there will be a lot of people watching Dell’s performance post the VMware spin.

“VMware has accounted for well over half of Dell’s operating profits and now we’re entering a new era where VMware revenues no longer will flow through,” he said. “But at the end of the day, it’s all about performance relative to expectations and Dell has consistently delivered.”

The company’s executive leadership also seems confident it will have no issues in the post-VMware era. Dell’s other co-COO, Chuck Whitten, told analysts on the call the company expects to continue seeing strong demand for its infrastructure products amid a global economic recovery and widespread digital transformation drive that has necessitated higher investments in IT.

“Against that backdrop and despite the difficult supply environment, we again delivered great performance in Q3, with strong growth in all three business units, all regions and broad strength across our commercial PC, server and notably, most of our storage portfolio,” Whitten said.

Whitten added that all of the signs point to continuing strong market demand and that the company is well-positioned to meet it by ramping up its new APEX-as-a-service business.

Dell launched its first APEX offerings earlier this year, following the lead of industry rivals such as Hewlett Packard Enterprise Co., Cisco Systems Inc. and IBM Corp. that have already committed to subscription-based pricing and delivery, a model also known as composable infrastructure.

In that scenario, the provider installs and maintains computer, storage and networking equipment on customer sites or in colocation facilities and charges based on usage. Infrastructure providers are responding to customer demands to even out expenses by shifting from a variable capital expense model to one that treats technology as an operating expense.

“Our strategy is not just to win in the consolidation but also to modernize our business, and our APEX-branded solutions are important to that future,” Whitten said. “Though it is still early days, we’re pleased with our technical progress and the momentum across our family of as-a-service offerings, which will continue to expand going forward.”