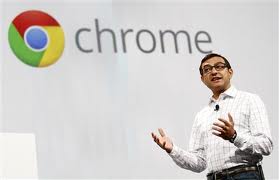 A man who once called himself a Google apostle has had his account restored after Senior Vice President Vic Gundotra personally looked into the matter and discovered the search giant’s automated systems had flagged one of his images as child pornography.

Thomas Monopoly lost access to his Google account in mid-July. After numerous attempts to get it restored, Monopoly went public  with a detailed and smart rant about Google and its policies. So furious about his treatment, Monopoly declared it his mission to denounce Google for what it did.

His story hit a chord. People contacted him with stories about their accounts being taken away. Thousands of people tweeted about his plight. The media recounted his story.

On Monday night, Gundotra gave Monopoly a call after learnning of his plight on Twitter. He called back again yesterday to tell Monopoly that his account was being restored and why it happened.

Monopoly is an artist. In art school, he posted some photos for an art project called “The Evolution of Sex.” The photos are fairly innocuous but one of the images was tagged incorrectly by Google. The mistake created a cascading series of events that led to his account being taken away for “perceived violations.”

Monopoly’s story about the impacts of  Google’s actions will give you pause. It points to why there are increasing calls for online services to work by a set of guidelines so people don’t arbitrarily lose their accounts and their accompanying information.

My Google account was tied to nearly every product Google has developed, meaning that I lost everything in those accounts as well. I was also in the process of consolidating everything into my one Google account. I had actually thought through this a few months ago and determined Google to be a trustworthy, dependable company. So I had imported all of my other email accounts, hotmail, yahoo, etc., into that one gmail account. I had spent roughly four months slowly consolidating my entire online presence, email accounts, banking info, student records, etc., into that one Google account, having determined it to be reliable.

Monopoly lost his calendar and access to Google Docs. He’s applying to graduate school and had been corresponding with professors. He had no idea if they have been reaching out to him as all of his contacts are now out of reach.

He went on a tear:

But I will instead be expending just as much energy as I did praising Google into denouncing what I now consider to be a horrible company, with shameful practices. I will be contacting my congressman, I will be selling my stock and I will also be contacting my bank regarding the money paid for the domain and storage which are now inaccessible, and I will pressure Google by any means possible to explain to me what it is that they perceived as a violation.

Monopoly is forgiving Google. He is not angry. But his story does point to what can happen when an automated system gets bad information:

Google employs an automated system to scan user storage for violations of their ToS and in the process erroneously flagged one of the images in the folder as child pornography, it’s as simple as that. I am not angry at Google about this, as some might suggest, only because I too found the image bordering on the limits of what is legally permissible and hoped to highlight the fact that it is allowed to exist within a grey area of legality. The fact that it has caused this controversy only emphasizes that point. Google was unable to speak with me about it for legal reasons and it was Vic Gundotra who fast-tracked the appeal process once he learned of the situation through Twitter and personally investigated. When I asked him what would have happened had he not intervened he said the case would have gone through the regular appeals process and may have taken weeks to be sorted out.

From a business perspective, there is a problem, too. It raises questions about backing up and archiving and any number of other issues that goes with using an online service. For example, read Google’s Terms of Service, which Monopoly cited in one of his posts:

The terms that are now offered for account sign up: “Google reserves the right to: Terminate your account at any time, for any reason, with or without notice” are not sustainable terms, and at some point a court will decide that those are unacceptable terms. As Google is a company that people entrust with so much of their personal information, and that is relied on so heavily, they need to provide proof of what it is that causes an account to be disabled. Again, you cannot take people’s money and you cannot monopolize entire sectors of the internet without showing some degree of responsibility to your customers. I should expect that Google will be forced to provide a means of retrieving personal info, such as correspondence and contacts, when an account is closed. The fact that Google does not currently offer this option when they baselessly disable a user’s account only adds insult to injury.

There’s an inherent risk in using free services. But we all do. But stories like Monopoly’s makes business people wary. Is this the way cloud services work? Yes, it is, actually. Services can shut you down.

Monopoly’s story may be a rare case but it’s ones like these that people remember. People want to use external services but there also has to be assurances that the data will not be locked down and unavailable with no recourse.

It’s why we will increasingly see groups like the Open Cloud Initiative, and other efforts from service providers like EMC, which has been focusing on “trust in cloud,” initiatives.  We’ll get to the OpenCloud Initiative in just a bit. It’s one that deserves a story all of its own.