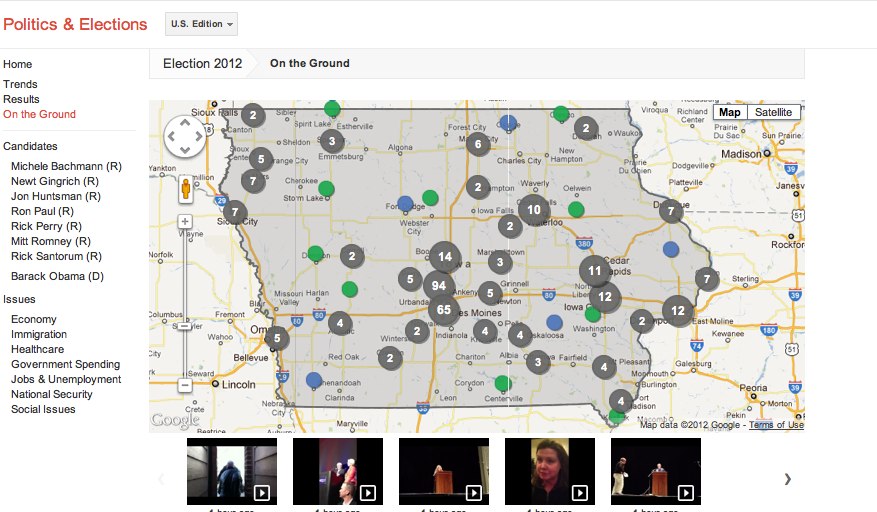 Comparing Google and Facebook on the Night of the Iowa Caucus

Both Google and Facebook have more data about people’s political views than practically any two companies in the world. How they use that data points to the deep differences between these two Web giants on this night of the Iowa caucus and the start of the 2012 political season.

But overall, Google gets the win for its use of data to tell a story about the caucus, the candidates and how they are viewed across the Google spectrum.

Google’s election page features the latest headlines about the current race and links to other Google coverage. But it’s the results page that gives the best view of the race.

Facebook puts no emphasis on using its data to provide perspective about the candidates. Its entirely up to the candidates and the community to establish a presence. What results are pages that are not muh better than what once could be found on MySpace.

I pulled together some screen shots from Google and Facebook and posted them to Slideshare. You let me know what you think. I’m convinced that Google will define itself as the central media hub during this year’s political season.

Comparing Google and Facebook on the Night of the Iowa Caucus

Google’s use of data is a reminder of how effective it can be to provide structure to the petabytes of data that get generated during major events. Facebook’s approach is the polar opposite. It’s using its community to give candidates a way to show their popularity. That results in some pretty shallow perspectives for the Facebook community.

Google shows how the online community contributes to an election. Its impact on the election itself is irrelevant Instead, it is playing the role of the media organization. Facebook is not. Instead, it is trying to push its influence on the outcome. It’s not working. Instead it is feeding into the old media method for showing nothing but amassing data that does little but give a surface look at the candidates and what they represent.